Yeah, that mathy 3 piece with oversized guitars is back. I mean seriously… look at the size of that guitar. I tried to count the strings but gave up. These guys have been around for quite awhile now, writing music that makes the average listener think “What the hell?” Behold The Arctopus (no longer with ellipses) pushes their music to the very limits of technicality and complexity. And they almost play it effortlessly. No matter how you look at it, this is an impressive group. 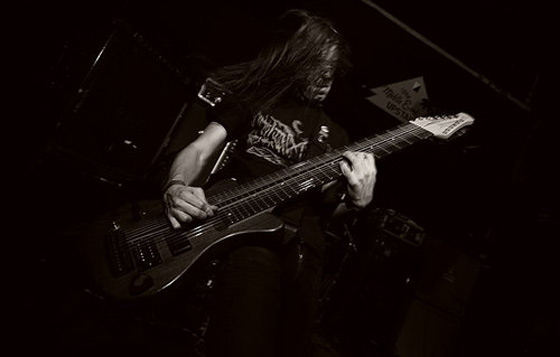 It’s been 5 long years since their last release but the band finally dropped a new record “Horrorscension” a few days back. Behold The Arctopus spent two whole years writing this one. And interestingly enough, “Horrorscension” was entirely written in notated form before instruments were even touched, adding to the chaos. It’s short lived, psychotic whirlwind of an experience, clocking in at 28 minutes with 6 tracks.

To the untrained ear, this is probably the worst shit ever made. But the trained ear can pick up on the insane complexities found within the Arctopus. This is by no means the kind of music I would listen to on a regular basis, but it can be very entertaining in its creative insanity and good for a listen or two on the shuffle.

(THE FULL ALBUM was posted by a third party. Subject to change.)

As to be expected the insanity starts from the get go with “Disintegore”. This track really sets the tone for the rest of the album. If you’re listening to Behold The Arctopus for the first time it screams “This album is crazy. If you don’t like it, get the fuck out!” It transitions into the next track with what sounds like a “Horrorscension” with theatrical horror strings wailing over rolling double bass. Then “Monolithic Destractions” hits with a wave of madness. It has some interesting grind like segments with blast beats between winding guitars and shifting drums. “Horrorsentience” gets good about 2 and half minutes in when a chaotic shredding guitar solo leads into a strange, dissonant build up to the end with some more soloing placed on top. “Deluge of Sores” is probably the most coherent track on the album with it’s somewhat thrashy feel. “Purefuckition” is the shortest track on the record spanning 1 minute. It’s a complete mind fuck with fast, technically chaotic riffing. “Annihilvore” doesn’t only differentiate itself by being the longest song on “Horroscension” at 10 and a half minutes, it is probably the most, dare I say, atmosphere oriented track on the album. It still brings the fast guitar and drum work, but it has a wider feel with it’s use of open chords. It has some really good moments, one of which strikes at about 4 and a half minutes in with the bassy end of the huge Arctopus guitar backing a flying solo. This is a worthy chaos filled end to this chaos filled album.

This record / band is so off the wall it verges on being tasteless at times. But that’s what the band is going for and they do it really damn well. It can be difficult to listen to this for long periods of time as the extreme complexity may cause your mind to wander off with a wall of crazy noise in the background. Also, the fact that the entire record was notated before played may have added to the chaos in some ways, but taken away from the umph of the Arctopus in others.

Like I said before, this wouldn’t be my first choice for pleasure listening but it does offer up some good, raw, off kilter entertainment. If you’re a tech-head with extreme experimental tastes, this is for you. You can listen to the entire album above! And if you want own “Horrorscension”, look no further. Buy it right here.