JUSTIN HUFFMAN LEAVES I THE BREATHER 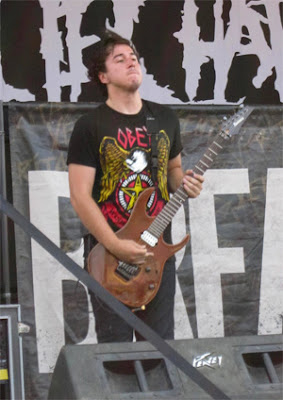 I The Breather is one of my local bands that actually made it somewhere. Currently signed to the awesome Sumerian Records, they have been touring the world and spreading their brand of heavy music. So naturally, I was pretty bummed to hear Justin Huffman, beastly guitarist and creative force behind I The Breather, has just parted ways with the band. This isn’t the only recent line-up change as they have taken on a new guitarist and bassist in the past year (give or take… pun intended). All the replacements have been solid though. Justin had this to say:

“As of today, I am no longer playing guitar with ITB. Simply because the
band is no longer my main priority. Over the past 3 years I’ve had the
best time of my life, and want to thank everyone who has ever came out
to a show. I will continue to write music, and most likely put out a
solo project sometime at the end of the year. So make sure to add me on
Facebook or twitter so you can see what I am up to! Thanks for all the good times! – Justin“

I wish the best of luck to everyone. We’ll keep you up to date with both Justin’s solo work and I The Breather. In the mean time… jam the tracks below! MOSH!