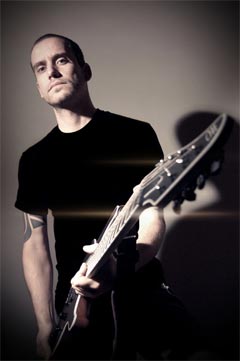 “I’ve been with TEXTURES from the very beginning and have had a lot of great adventures in the past 12 years, musically and socially! It was a dream come true, I was traveling across the world with my best friends and making music!!! What more could you want?!! Strange as it may sound, my priorities changed gradually during the years… Now the time has come for me to start doing other stuff. There are so many things in life that gives me goosebumps! I’m really busy producing great bands and other music at my studio and I want to focus more on that, I will keep on rocking!!!! Also, I will keep being involved with Textures and will continue producing future TEXTURES albums \m/”

This is probably the best possible outcome of Jochem Jacobs leaving the band. As much as it essentially sucks that they have lost a founding member, it could be much worse. Textures will most likely continue to sound like Textures and all is well amongst the musicians. No stupid drama here. The following is a statement issued from the band.

“Ladies and gentlemen, it has been a bit quiet around the TEXTURES camp lately. It is for a valid reason. After 12 years being a big part of the band, Jochem has decided to leave TEXTURES. It is sad to see him leave, but we respect his decision fully. Since the very start of TEXTURES, Jochem has helped the band get to where it is right now and his input will always be part of our music. It’s a big setback for the band, but we are fully determined to keep on making music. Therefore the search for a replacement guitarist has begun! More news about this coming soon! Bare with us guys! Remember that you, our fans, are the ones that make us want to move on at full-speed and create some more crazy music! \m/”

The future direction of this band is in question. But no matter where they go, Textures is sure to leave a trail of greatness. Stay tuned for more news from the Netherlands giant. While your waiting, jam the tracks below!