Turns out there was also a fight. There are several versions of the story. There has also been a death threat among other challenges to the band. This includes one of the most embarrassing “tough guy” photos I’ve ever seen.

Fist off, here’s the initial Volumes version of the story told via (pun intended) twitter and relayed through the website Property Of Zack. Apparently the fight broke out shortly after Mike Barr’s dedication. Here’s what they had to say afterwards. 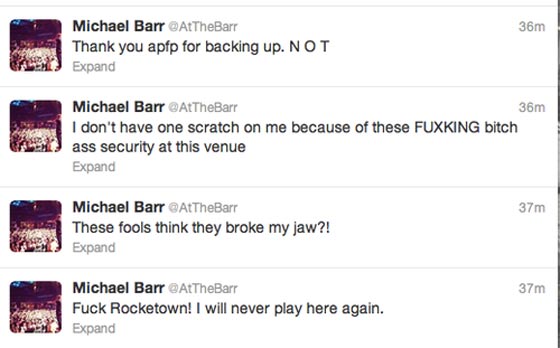 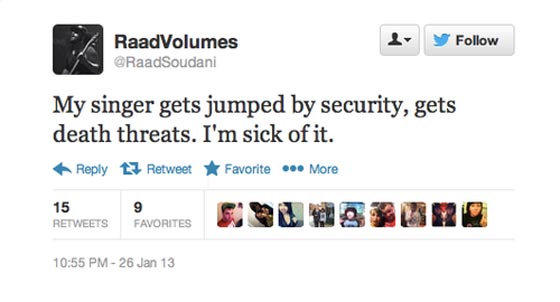 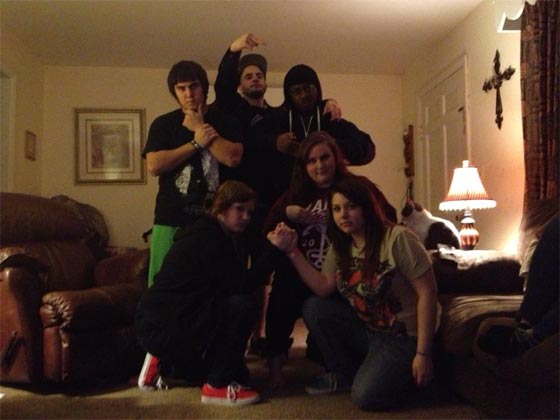 More stories have emerged in the past few days which seem to point to the conclusion that the fight itself was not sparked by any gay rights issue. Other eyewitness accounts (the comments below for example) state that Mike Barr was acting with unreasonable aggression it the pit shortly after making his dedication.

Also, promoter Mark Mosley recently spoke with Property Of Zack, giving his first person account of some actions taken that night. You can read below.

“Tonight, for the first time in my career I experienced, well, I don’t even know how to describe it. I was the promoter for the Volumes/Of Mice and Men show tonight and got to experience the “incident” with Mr. Barr first hand.  As Mr. Barr was being removed from the venue I was standing next to the exit having a conversation with a friend. As an extremely agitated Mr. Barr tried to re-enter the venue, I calmly stepped in front of him and as calm as could be (people get excited at shows often)  to please stay outside and cool off for a minute. Mr. Barr then proceeded to verbally attack me calling me “faggot” repeatedly as well as accusing me of being a Christian (I am neither gay nor a Christian). He then proceeded to spit on me 2x before being escorted away by security. All the while still calling me a “faggot”, “Christian faggot”, and so on.

I think it’s important that you know more of the story seeing as how its being presented that he was the victim. I do not believe for one second that he was attacked or removed for any reason relating to gay rights. For me personally, I take gay rights very seriously and fully support equality for all. Anyone who knows me or has worked with me over the years will vouch for my professionalism. As for the rest of the members of Volumes, they were very courteous and professional and I look forward to working with them in the future.”

Guess we’ll see if any video footage or further details emerge. In the mean time, blast some tracks from Volumes.