West Virginian guitarist, Ryan Postlethwait has programmed a genre of his own…”Nintendo Nerd Metal.” Mega Beardo is the solo project name for Postlethwait, in which he uses some of the best games from Nintendo’s earliest years to inspire metal-infused soundtracks! Mega Beardo is self recorded and all instruments are played by Postlehwait. To top all that off, he plays a guitar made from an NES console!!! This is truly amazing stuff. Mega Beardo’s discography includes a Mega Man 2 tribute, an original Castlevania concept album and a Zelda/Meshuggah masterpiece so appropriately titled “Ledjent of Zelda.”

Ryan Postlethwait, aka Mega Beardo’s most recent addition to the nerdy world of prog-metal and video games, “Ledjent of Zelda”, is the perfect listening experience for fans of both endeavors. 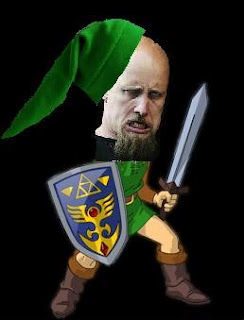 “With this “Ledjent of Zelda” project, I was hoping to offer the listener a more unique way to hear the original soundtrack to The Legend of Zelda. The title is obviously a play on words and is meant to say: “This is what this music would sound like with a modern metal mindset.” This isn’t “djent.” It’s The Legend of Zelda played by Mega Beardo through a Meshuggah filter, creating a musical bridge between 1986 and 2013.” – Postlethwait

Mega Beardo aims to create a musical bridge, which is precisely what “Ledjent of Zelda” does. Connecting a twenty-seven year gap, relating videogames to heavy metal and reliving 8-bit tones through the preferred Meshuggah guitar tone. This is an honestly heavy 4 track devotion to Legend of Zelda; the first game to be released from one of the greatest video game franchises to date. This Mega Beardo release is awesome enough despite the fact that it is derived from Legend of Zelda, with its dirty progressive chugs and catchy shreds. The track “The obzEnd” is so successful at pulling me in that I can almost envision the Swedish metal gods shuffling around the Zelda landscape alongside Link, using djent tones to defeat the dreadful Ganondorf. Hey! Maybe Mega Beardo’s next project will be called “Ledjent of Zelda: Ocarina of Time Signatures”…I wouldn’t keep your fingers crossed.
Check out all the tracks from “Ledjent of Zelda” on Mega Beardo’s Bandcamp!
Mega Beardo’s first release came in the form of “Mega Beardo: A Mega Man 2 Guitar Tribute”, over twenty years after the 1988 release of Mega Man 2. The music used in Mega Man 2 is undeniably some of the catchiest 8-bit clicks, beeps, and shuffles ever created. I remember playing Mega Man 2 when I was still too young for school, and I didn’t realize at the time, one of the most intriguing parts of the game was the music. I unknowingly loved the music, and I loved the metal themes behind it, but I wasn’t old enough to understand why I liked it. For all I know Mega Man could be my very first musical influence. 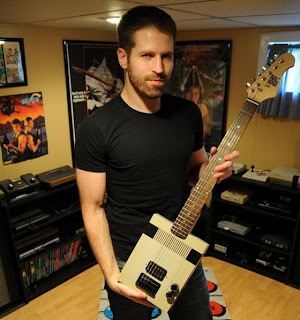 Mega Beardo accentuates the heavy metal of Mega Man 2 music here. Postlethwait says this about his work with Mega Man 2…“All in all, my goal was to allow the listener to experience playing the game from beginning to end with his or her ears alone….Every track progresses into the next as if the game is being played inside of your head. Naturally, these songs were not originally intended to transition into each other. So, I had to write and/or rearrange these progressions in order to make this seamless listening experience possible.”

Maximum appreciation for Postlethwait’s work comes from comparing an original Mega Man 2 song to the power-prog-metal adaptation. Mega Beardo captures all facets of old school gaming noises and music properties so accurately that it is possible to mistake his rendition as the real thing; making the constant lead guitar and shredding solos seem like a programmed entity, when in actuality it is “Nintendo Nerd Metal.”
Here is a link to the original Mega Man 2 Wood Man theme music. Compare this to Mega Beardo to see just how awesome this is!
Along with Mega Beardo: A Mega Man 2 Guitar Tribute and Ledjent of Zelda is a Castlevania concept album titled Belmont, after Simon Belmont, the game’s primary protagonist. Belmont is not a cover album of the Castlevania soundtrack but rather truly original collection of tracks and original lyrics that are based upon the game and its story features.
Mega Beardo’s  excerpt to the fans regarding Belmont…
“… All nine tracks on the album follow Simon Belmont as he progresses through each level of Dracula’s castle to fulfill his destiny. The lyrics deal with Belmont’s personal journey as he struggles with the burden of ridding the world from impending darkness. The recognizable villains and in-game environments play a key role, while certain characters and elements of the game will be expanded upon in ways that enrich the overall story.”

After listening through Belmont I feel rather in-tune with the game despite having never played the original Castlevania, sadly. Although, I am anxious to pair the album with the game at some point in time. I have no doubt that Mega Beardo accurately depicts the adventures of Simon Belmont with precision. Belmont is a true metal ballad that can bring enjoyment to fans, no matter if they are familiar with Castlevania. Belmont surpasses the expectations a “video game concept album” may have (if such judgments exist) by conquering so many genres of metal…Heavy, Progressive, Power, Doom, Thrash and Black metal are the foundations for this vampire slaying adventure. The darkness of Belmont is incontestable. The vocals are haunting throughout, especially on track “Such is The Curse,” I receive vibes consistent with those shared by a graveyard. The solos are absolutely chilling. There is a dark magic to be discovered within the castle walls of Belmont.