Pomegranate Tiger have earned the bragging rights of being our first ever Artist of the Week! We have a FREE MERCH CONTEST for you to take advantage of and an in-depth interview with lead guitarist / extreme talent Martin Andres below. You can also read our full review of “Entites” right here and watch some videos of Martin doing what he does best down yonder.

We’re giving you the chance to win a FREE T-shirt and an autographed copy of Pomegranate Tiger’s album “Entities”! 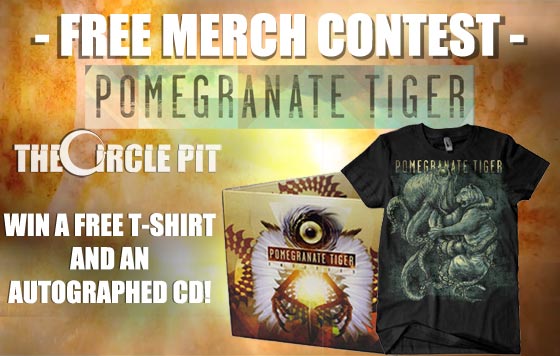 ENTER TO WIN
1 – Must follow The Circle Pit
2 – Must follow Pomegranate Tiger
3 – Spread the contest whatever way you can and give both Pomegranate Tiger and The Circle Pit a shout out!
4 – Interact for bonus points
This contest ends 3/14 at 9PM EST
YOU KNOW WHAT TO DO! LET’S GO!
* If you win, we will require your e-mail address.
*By participating, you acknowledge that you completely release Facebook of all responsibility. This promotion is in no way sponsored, endorsed, administered by, or associated with Facebook.