EVER FORTHRIGHT – ARTIST OF THE WEEK CONTEST / INTERVIEW

The insanely talented Ever Forthright have been named Artist of the Week! Enter for your chance to win a FREE autographed copy of “Ever Forthright” and check out the in-depth interview with vocalist / sax man Chris Barretto and guitarist Nick Llerandi below! Let the games begin \m/ 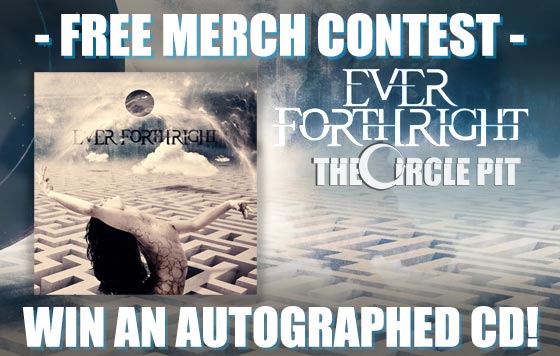 *By participating, you acknowledge that you completely release Facebook of all responsibility. This promotion is in no way sponsored, endorsed, administered by, or associated with Facebook.

MT – How did you dudes come up with the name Ever Forthright?

NL –
… well. Yea. But also, that name is very old. It goes back to when Billy and I started writing music together when we were teenagers. We wanted to make music that was an honest representation of ourselves. Thankfully the name still applies and holds true today with the lineup. Good thing we didn’t decide to go with “Carnivorous Shit Fuck”… not kidding.

MT – “Carnivorous Shit Fuck” would make an awesome grindcore band! Probably better that you went with Ever Forthright though. You guys live in a BIG damn city. What are your favorite NYC past times?

MT – Sounds like a good time to me. Speaking of NYC, the new music video “Lost In Our Escape” was partially filmed on a New York City rooftop (watch it above). Can you tell us about the shoot and the ideas behind the video?

CB – For sure. The song and the video is about a seduction. Instead of going with a visual that was straight forward about it, i had the idea to do the seduction between a girl and her art. She represents the female energy, the paint represents the male. As she paints throughout the video, her connection to the paint becomes more and more intense. The paint flows off the canvases, it tries to over take her, she resists, the paint tries again, succeeding in the end. It’s just a fun way to re-imagine an age old dance. We shot half of the video on a Brooklyn rooftop, and the other half in a Brooklyn loft. I feel like it’s pretty awesome that we have this skyline available to us, so I wanted to show off the city as much as possible in the band shots. Andrew Pulaski directed the video and really helped capture the theme of the song. It was great to work with him and his crew on the two days of shooting. Can’t wait to do another one!

MT – Very cool. That description definitely adds additional value to the video. The song came from your insanely good self-titled debut. Can you tell us a bit about what went into creating that record?

NL – That record is a culmination of many years of writing and learning and living. Sometimes I can’t believe we actually finished it. It’s the years that Billy and I were just writing alone. Then I can hear all the parts where Kevin became a part of the band, when I met Jerad at the conservatory, deciding to make it a live thing and throwing my brother in the mix, then when Chris came in and did what literally no one else could do, it happened. Chris and I did a interview in Europe when we were touring with Born of Osiris, After the Burial, Monuments, and playing with The HAARP Machine, and were asked something along the lines of, “When was Ever Forthright born?”. And after a second we realized that Ever Forthright was only just recently born. Maybe even somewhere AFTER the first record; because now from start to finish, everything we write and do is as a team. This will definitely be noticeable in future
releases, material, anything. And for the better.

CB – Thanks!
Vocally, I just wanted to be as epic as the music behind me. I tried some different things on the record in terms of harmony and structure that i hadn’t done before. I felt like the idea was to be as outside of the box as possible but still have something to hook onto, if that makes any sense.

MT – Makes sense. You can definitely hear it in the final product. What inspires your music?

NL – Family is a big one for me, and the idea that these people are my family; to create with them and learn from them for as long as possible. And not only the people in the band, but the people around me are in that family too. Knowing that if I keep doing what I’m doing, I can be surrounded by these people, relationships, and friendships for a very long time. That is all the inspiration I need.

MT – A good number of people have been craving more since the debut. You just hinted, but can you guys officially state if you have any new music on the way?

CB – Heeeeeeeeeeeeellllll nah. Actually we do, and we think you’ll dig it.

MT – Gotcha. Looking forward to hearing the music you aren’t working on. Nudge, nudge, wink, wink. Not too long ago Nick won the Mayones / Seymour Duncan Solo Contest. That solo was nuts! How was the response to that?

NL – Thank you, Chris. It was fantastic. Really one of the greatest things to happen for me and my band. Not necessarily for the views on YouTube, and the guitar but more so for the fact that people know what I’m here to do now. My goal was to get involved and show people that I’m here to be an artist. I’m not here to try to continue replicating what a million people are already doing a great job at. There’s no need. I want to bring some new sounds, and try things. But I also want people to know that I’m always going to be trying new things. I don’t like getting too comfortable, and I don’t want my listeners to either. For me it’s not just entertainment, it’s an art. And it’s not just an art, it’s a science. And every song, lick, riff, whether it be improvised or thru-composed, I’m thinking about more than just being an entertainer. I’m thinking about the people around me, their feelings and how they’d react. I’m a very curious musician, and I love observing what some sounds can do to people. And that’s what I’ll continue to do.

MT – Awesome. Keep doing what you’re doing man. Definitely a fan of what you bring to the table. Out of curiosity, what’s the situation with you guys and The HAARP Machine?

CB – We’re just subs for the time being. We had a chance to help out and we were glad to do so. as of now, it’s pretty much at that level.

NL – It was a blast, but I have my baby to worry about I’d play again if the timing was ok, but right now it’s Ever Forthright full time.

MT – That’s actually kind of a relief. Don’t get me wrong, you two make a perfect fit for The HAARP Machine, but Ever Forthright is a force to be reckoned with. It’s good to hear you’ll keep up the full-time status. Have you guys done much touring as Ever Forthright? Any favorite shows?

CB – We’ve done one tour in Canada. It was an awesome tour and Guelph was my favorite. Some good Canadian poutine lead to some good ol’ poontang.

MT – I keep asking bands this question for the laughs. What’s the craziest thing that’s ever happened to you on tour other than your apparent sex tape?

CB – I had sex in a stripclub bathroom.

NL – I… didn’t. I don’t know really. haha. I’m kind of boring. BUT! At that same strip club I was taking a wiz in a urinal and the stall door to my left opened slightly and a man whispered, “I’m in here if you want”… I didn’t want. So I got the hell out of there. This was Prague by the way.

MT – Hahah oh man, talk about close calls. Maybe you can add some experiences this year. What are your plans for the rest of 2013?

NL – RAPPELLING, I, think he means…. We enjoy mountain climbing. And Touring, which is on the agenda as well.

MT – You heard it people. Hide yo kids, hide yo wife and your mountains. Here’s the fun round. What’s a French Doorknob? Chris should know.

MT – Sorry kids. No French Doorknobs today. Thanks for your time fellas. Any shout outs you wanna give before we end here?

NL & CB – I love my penis. But much love and respect to all of our supporters, our friends, and our family. we look forward to our continued growth with all of you beautiful people!