EUROBLAST FESTIVAL 2013 – THE LINE UP SO FAR

Cologne’s Euroblast Festival doesn’t need an introduction for many of you, so I’ll put it this way… One of Europe’s most mind-blowing metal festivals will unleash all of its energy on the crowd from the 11th til the 13th of October. It seems like this forthcoming ninth edition is going to be another blast!

In fact, the guys at the Euroblast Collective have announced a good portion of this year’s line up and two of the headliners. Textures will be performing their only German show of 2013 here. The second headliner is Germany’s very own The Ocean. The rest of the unveiled line up is stacked as well, making this an unmissable event. Euroblast 2013 will feature international names like Threat Signal, The Agonist, Twelve Foot Ninja, Arsis, Hacride, Benea Reach, Mnemic, Feared, Xerath, Lifeforms, Aliases, Humanity’s Last Breath, Syqem, The Omega Experiment, Deathember, Der Weg Einer Freheit, Dawn Heist, Hord,  Overdown, Pomegranate Tiger, Tardive Dyskinesia, Cyclamen, Kartikeya, Heights, and Third Ear.

Last year’s line up featured more than 40 bands. This year is currently at 28. So the only thing you need to do is stay tuned for the announcement of the third headliner / rest of the line up, coming very soon. If you live in Europe, you should definitely start thinking about buying tickets. This is the kind of event you don’t want to miss! 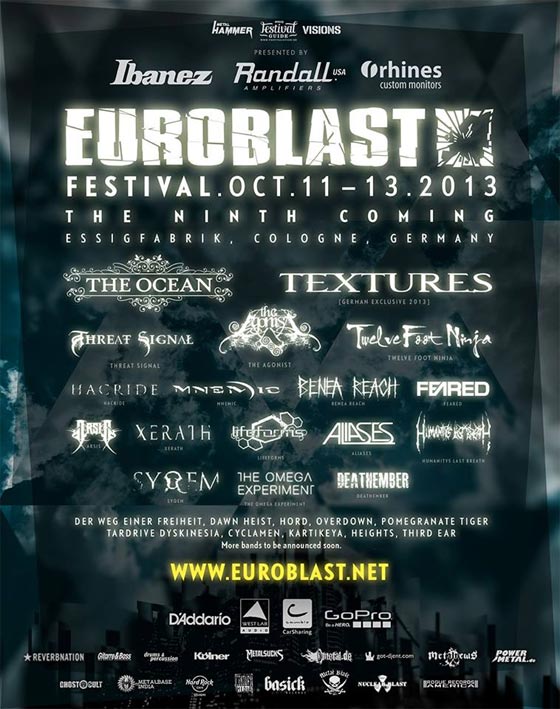