You remember how Structures was our Artist of the Week? hehehe… Better late than never, right? Here’s the main course of the promotion! Go ahead and enter to for a chance to win a FREE Shirt / CD package from Structures! Also be sure to check out the in-depth interview we conducted with Structures’ very own drummer Andrew McEnaney! Let the games begin. 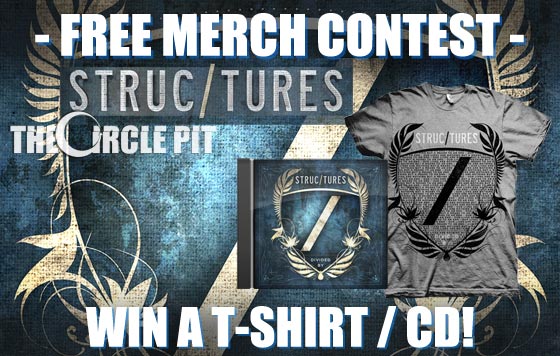 TD – First off, state who you are & what you do in Structures?

AM – I’m Andrew, I play drums in Structures.

TD – How did Structures form?

AM – We were a local band from Toronto, we would play shows on tours that would come through and we had a decent following. We decided we wanted to take it a bit more seriously so there was a few member changes and here we are.

TD – What was the first Structures show, & who was on the lineup?

AM – First Structures show was actually with Danza, Stray from the Path, and The Number 12 Looks Like You. The line-up is exactly what it is today, we are all original members. That show changed our lives though, for sure.

TD – You released your first EP All Of The Above, what was the writing process for that release, & where was it recorded?

AM – We just wrote what we thought was cool music and music that we wanted to hear. We genuinely loved writing that album because there was no deadlines or expectations, we just did it out of the love for writing cool music that we enjoyed. We wrote it in Spencers tiny garage on super hot days. We recorded it with Jordan Valeriote at Sundown Studios in Guelph, Ontario.

TD – How did the release of that EP go?

AM – Pretty good, it actually leaked pretty early but at that point it was the best thing for our band… for people to hear us without having to pay for it. We did actually have a pre-order campaign through Outerloop Management, so it was cool to see how many people picked it up considering we were a new band.

TD – The band signed to Sumerian Records, what was the decision to sign to that label?

AM – We always just loved the bands that Sumerian had on their roster, and we sort of wrote our EP to tailer to that label in hopes to sign to them, and we ended up doing exactly that. We knew what we wanted, and we did it. Very cool!

TD – The band recorded & released Divided By, how was this album different to the EP?

AM – Much different, we had to follow up to an EP that was super well received. It took us about 4 months to write it, but about 40% of that album was written at the Machine Shop, where we recorded it. We wanted to simplify some things so that it wasn’t too hard for people to understand, but still hold onto some technicality so we wouldnt lose fans. We’re very proud of that album… it brought us around the world, and it’s only our first release on our label.

TD – You got a couple of guest vocalists on that release (Frankie Palmeri, Alex Erian & Kevin McCaughey) how did you get those vocalists on the album?

AM – I think they just appreciated what we were doing and had respect for our band. We have a ton of respect for all 3 of those guys so they probably took it as a compliment and wanted to pitch in with their features. We’re very lucky to have those guys on our album.

TD – How was the reception to Divided By?

AM – It was pretty awesome, we got some flack for the production of it, but overall I’m pretty confident that no one has ever released or recorded an album that sounds like that or is put together that way. We definitely learned a lot from that experience though and our next release will be much, much better in all aspects.

TD – How’s the touring life been since signing to Sumerian?

AM – Its been pretty awesome. We do tours that we actually WANT to do, instead of tours that we NEED to do. We’ve been on tour with Parkway Drive, Whitechapel, Architects, Veil of Maya, Miss May I… We have been very lucky!

TD – You did some European touring with Parkway Drive, how was that?

AM – Incredible. One of the best tours we’ve ever done. Very surreal going on tour with that band as well as Emmure.

TD – You’ve announced you’ll be heading to Australia for the first time for the Northlane tour, are you excited to head down under?

AM – Extremely excited. We love Northlane, we love them as people and we love their music. It’s been known that Australia has wanted us to come over there for a while now, so going over there with a band like Northlane is the best thing we could ever ask for. Cannot wait to get over there!

TD –  You’re heading out on your own headliner in Canada, will it be good to tour again in your home country?

AM – It’s about 6 shows in and we’ve sold out 4 of them, so its definitely been a great tour so far. Reactions have been amazing and we are very lucky that people still care about us even though we’ve been touring off Divided By for quite some time. Reactions for all the bands we have on tour with us have been awesome too so thats always nice to see!

TD – You’re bringing along Texas In July, Northlane & Intervals, why did you decide to bring those bands along?

AM – They all have something different that they bring to the table. We grew up playing shows with Aaron Marshall (intervals) and I drove Northlane on their first Canadian tour with SFTP, Counterparts, and Obey the Brave, so thats how that relationship formed. And we toured with Texas in July years ago, so we knew everyone already before going into this tour. Everyone is awesome and we’ve been getting along very well.

TD – You’ve got some dates on this year’s All Star Tour, any bands on the tour you’re excited to see & perform with?

AM – Definitely excited to tour with Stray from the Path and Veil of Maya again, always love touring with those guys. Also Every Time I Die has been a major influence since we started playing heavy music, so being out with them will be a privilege. Chelsea Grin dudes are also apparently awesome so it’ll be cool to be out with those guys!

TD – The band has been working very closely with Volumes, you’ve used the word Vol/tures to describe the collab, any news when some music will be announced?

AM – Yeah, those guys are our brothers. Been touring together since we started and we’ve always been grouped together. We love them. I went to California this March and ended up writing a track with Diego (Volumes guitarist). Pretty much all I can say about that right now!

TD – You’ve also been working on a new album, how’s the progress going with that?

AM – Very well! We’ve matured a lot since Divided By and we have never been so excited about our music as we are with this album. Very much so excited for people to hear what we’ve been up to the past few years. Heaviest we’ve ever been, as well as the most melodic we’ve ever been, and at the same time we’ve kept all the technicality so it still sounds like us. It’s a pretty cool mixture of Divided By as well as All of the Above. I listen to our pre-pro almost every day.

TD – Any last words for the fans?

AM – Thank you so much for your support and love, we will have new material for you guys ASAP and we promise it will be something you will be very happy about. Thanks, and see you on the road!