So first off and most importantly, Avenged Sevenfold have unleashed the first single from their new album “Hail to the King.” The song is the title track for the record, obviously also titled “Hail to the King.” The dudes said that this album was very influenced by classic rock. That influence is definitely there, as this song sounds like something that would be found in an 80s arena metal band’s setlist, like DIO or something.

Unfortunately, it feels a little low in the energy department, this song lacks the emotional substance and energetic vigour that older Avenged Sevenfold tracks had. The chorus is cool and the solo is pretty cool as well. But the verse is pretty boring honestly. I love slick production in metal, I am no fan of the rawer stylings of recorded music. I feel like you can have your metal be ‘raw’ without making it impossible to distinguish what’s being played. But this track’s production definitely took all the balls out of the music. Also, the new drummer is kinda boring here, which is weird considering the last track he played on was awesome, including the drums. Hoping the rest of the album is better.

Also, the band has unveiled a more modern, more detailed version of what was earlier revealed as the album cover for “Hail to the King.” But wait, that’s actually only the artwork for the single “Hail to the King” and there’s a different one for the actual album. This one is the “Waking the Fallen” album cover, except it’s a view of one half of it. And like it says “Hail to the King” on it instead of “Waking the Fallen”, like of course. Thrash band Lich King, who has a piece of album art that looks a little reminiscent of the first art revealed, has drawn up some publicity and given me a whole lot of laughs with their picture comparing the art and their ensuing responses to fans on the picture. So go read that, I linked it below. 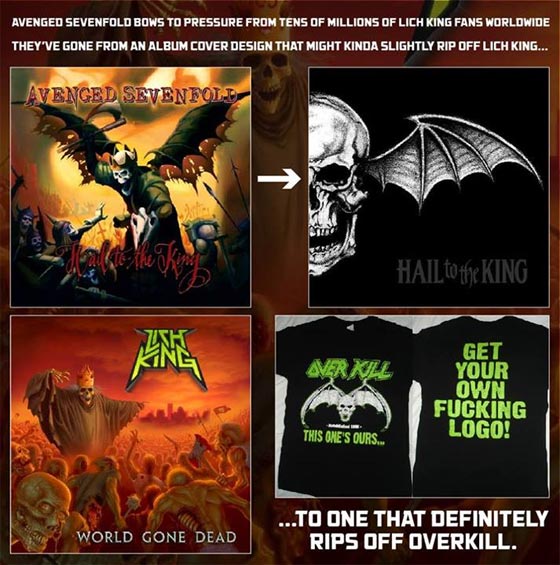