Yeah, we’re a bit late on this one but shit happens. FALLUJAH is the name. Get with it or get lost. This band is Atmospheric Death Metal greatness coming straight from San Francisco, CA. Expect next level skill, heaviness, extreme technicality, forward thinking creativity, and of course mind swallowing atmosphere.

We were proud to host them as Artist of the Week and of course we gotta celebrate. So here’s a chance to win some free stuff! Read the contest details below and you might just walk away with a Fallujah shot glass or a free download on the incredible EP “Nomadic”. By the way, I personally own a Fallujah shot glass and it has served me well \m/

Also be sure to check the interview we conducted with vocalist Alex Hofmann for all kinds of in-depth info on Fallujah. 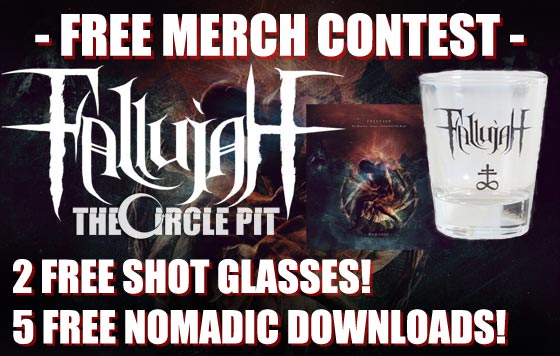 MT – Let’s start from the beginning. How did the band get started up?

AH – Scott and I (Alex) met in high school, we jammed once freshman year then chilled for a bit, then later on in sophomore year got back together and wanted to make music still. Our bassist, vocalist and drummer were all other guys at our schools; and things simply went form there.

MT – Moving forward, you dropped a monster of an EP called “Nomadic” this year. What went into creating that beast?

AH – Basically we wanted to release new tracks to hold people over until the full length comes out. Our label (like most metal labels) doesn’t exactly like to stray from the path on release formats, so the tracks had to be turned into an EP, so we wrote them both and realized the best way to savor both songs is to add an intermission or palette cleanser of sorts in the middle that harnessed the more atmospheric qualities. It got turned into an EP and we called it Nomadic for a number of reasons. Both tracks were a bit longer than the songs on the Harvest Wombs  as we wanted to achieve more with the songs and give people a more dynamic product.

AH – There really wasn’t much of a transition in the terms of our writing style and mentality. A lot has happened in our lives and experiences, so the new material is a reflection of natural transition as oppose to a demand to “sound different” as some bands are pressured to do.

MT – Does “Nomadic” hint at the direction of your future music?

AH – Yes and no, I can say now that nothing that Fallujah does will ever recycle from the old. In a certain way we want Nomadic to stand on its own. Id be greatly disappointed if our next album was just a longer Nomadic. What it does hint at is the more melodic, atmospheric and clean elements that the music will harness. The extremely brutal elements become a bit stale to us, even in the live environment. The music will still be death metal, but dont expect brutal slams or technical riff salad without direction or melodious structure.

MT – Who or what inspires you?

AH – This questions depends on who you ask, personally the most musically inspiring thing for me us music that isnt metal. I think the best way to make fresh sounding songs, progressions or melodies Is by looking where no one thinks to look or inspiration. Right now, I dont think metal bands can afford to be incestuous with their influence if they hope to have anyone caring 5 years from now. Looking to a fusion track, a shoegaze track, or a house track opens up way more doors than going back to what you know; no one ever reinvented the hamburger with meat, cheese and bread.

AH – Basically we are finishing the new album up, trying to get it done by winter time and have it out early next year, but who knows if that will happen. We are touring through the US and Canada through November with bands I cant really announce yet.

AH – Hard to say, The Dead Sea is really fun in my opinion. If not that then we would probably all agree Assemblage of Wolves we really enjoy, thats why we end with it. Were always eager to play new music though.

MT – What is the craziest thing that has ever happened to you at a show or on the road?

AH – I drunkenly danced in front of a crowd of gay dudes, drag queens and transexuals at a speakeasy in Lake Charles Louisiana when I was 19. Fallujah was on tour with Diskreet and we accidently stumbled upon the place after leaving this other bar/nightclub on a day off. Twas a liberating experience.

MT – Sounds like it. If you could tour with any bands in the world, who would you hit the road with?

MT – Now for a serious question… WHY IS THE RUM GONE?

AH – Because Beer is better.

MT – Have to agree with you there. Speaking of beer, it’s Friday and our work here is done.