We’re holding an bigass promotion with our friends in Auras. They were our Artist of the Week not too long ago, and for good reason. This Canadian four-piece pulls off some razor tight playing, showing off technical skill and musicianship on all fronts. Most definitely a band to watch out for.

Onto the bigass promotion… We have a contest live via our Facebook App, giving you a chance to win some very cool stuff. Check the picture just below and you’ll see what I’m talking about.

We also conducted an in-depth interview with the guys! Read up and learn. 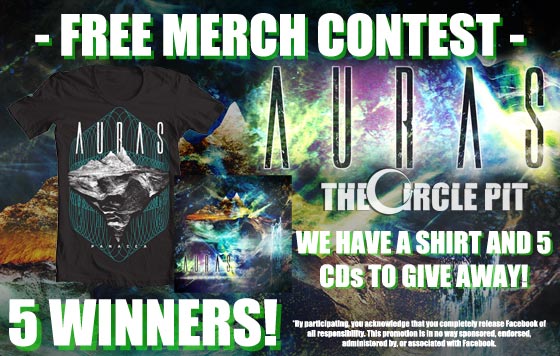 MT – How did the band get started up?

AH – Josh originally started the band back in 2008. It began as more of a basement project and then slowly grew into a more serious project as lineup changes occurred. Our current lineup was established in mid-2011.

MT – What went into making “Panacea”?

AH – Our EP Panacea took us a fairly long time to compile. We spent a lot of time writing and revising our ideas. We also had a fairly flexible producer in Chris Cosentino, which allowed us to experiment with ideas in the studio and spend time editing previously recorded sections. In general, our EP took a considerable amount of time and effort from every member of our band.

MT – How was the response?

AH – We didn’t really know what to expect leading up to the release, but we were really happy with how the EP was received. There was a fair amount of positive feedback and some very useful constructive criticism as well. We are always open to feedback and really appreciated when people shared their ideas with us.

MT – Is there a concept behind the Panacea artwork?

AH – When it came to the album art, we wanted to have something that symbolized the concept behind the album. The complex and colorful “floating piece of land” centered in the artwork is intended to symbolize the complexity and diversity associated with developing solutions for the major problems we face in this world. The artist, Daniel Wagner (D-Dub Designs) did an incredible job illustrating the general meaning behind our EP.

MT – You just dropped a single called “Adverse Condition”. Can you tell us a bit about that?

AH – Adverse Condition was our first attempt at song writing on 7 string guitars. We wanted to push the boundaries of our song writing and really focus on our strengths. With this track, we really put a lot of time into the pre-production process so that we were able to perform the song in the studio and capture a more natural sound overall.

MT – Any more new music in the works?

AH – We are currently working on compiling a full-length album; the release will take place sometime in mid-2014 if all goes as planned. There is also the possibility of a single or two being released in the mean time. We are always writing and working on new material.

MT – What inspires your music?

AH – Each member of the band listens to a fairly diverse collection of artists that we definitely draw some influence from. Ultimately, we care about making music that we are passionate about and that we love to play.

MT – How was that Ever Forthright tour?

AH – Our tour with Ever Forthright was honestly one of the most incredible experiences in each of our lives. It was an absolute honor sharing the stage with such a talented and inspirational group of musicians. It was also an essential experience for our band, as it was our first tour. At this point, we are all very excited to get out on the road again.

AH – We really enjoyed playing our newest track Adverse Condition this past tour, as it is fresh to us. However, we also love playing our song Cascade as it usually generates the most crowd reaction and is the first song we wrote as a band.

MT – If you could play with any bands in the world, what would the lineup be?

AH – Our ideal tour lineup would probably include: Disperse, The Contortionist, Tesseract and Meshuggah. These are bands that we have a massive amount of respect for and would love watching live day after day.

AH – At this point, we are mainly focused on developing material for our full-length album that we hope to have out in mid-2014. We also have initial plans to record another single fairly soon and potentially shoot a music video for that track. Once we have the full-length ready, we hope to tour in support of its release and travel as far as it can take us.

MT – If you were stuck eating one kind of food on tour, what would it be?

AH – We would have to make the relatively healthy choice and go with sandwiches/wraps.