Better late than never, right? Not too long ago we featured Periphery as our Artist of the Week. This time… it’s personal. For those who don’t know, Periphery is a cutting edge Progressive Metal band known as a major influence to many. They are largely responsible for popularizing the “djent” movement around the world. This traveling troupe of troubadours triumphantly trumps… okay I’m done.

To celebrate this occasion we have an awesome contest going on in association with Periphery and Sumerian Records. There will be a total of three winners. We’re giving away two shirts and the band’s full CD catalog (Periphery, Icarus EP, and Periphery II). Look down below for instructions on how to enter.

We also had the chance to interview the band’s incredible singer Spencer Sotelo. His voice goes up like an angel and down like a wounded ox. Read up on the interview to learn some more. 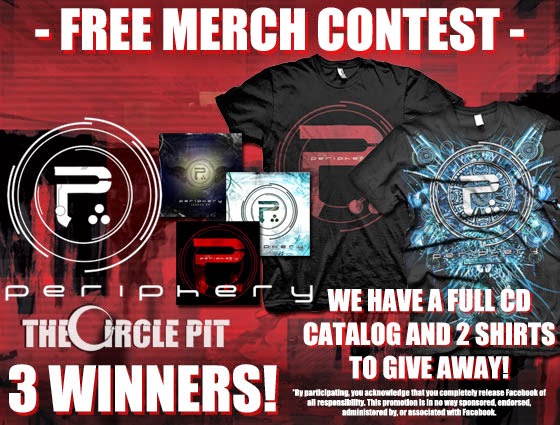 *By participating, you acknowledge that you completely release Facebook
of all responsibility. This promotion is in no way sponsored, endorsed,
administered by, or associated with Facebook.

MT – What did you have for breakfast this morning?

SS – A Panera breakfast sandwich and a protein shake.

MT – Is there any future for Peripheroth?

SS – I think once the band starts dying off, we can use that as a sweet gimmick to revitalize interest in our band…. Expect face paint and black metal voice on stage every night when we are fat, old and washed up.

MT – You came out with your sophomore album “Periphery II: This Time It’s Personal” last year. Can you tell us what went into making that record?

SS – That album was written and recorded on the opposite end of the spectrum in comparison to our self titled. We wrote it as a collective band instead of one person writing the majority of the music and then took it to an actual studio. It sounds completely different sonically and artistically…. I think for the better!

MT – How did it get the title “This Time It’s Personal”?

SS – We wanted it to have a shitty action sequel-esque title for laughs. I think it worked out pretty well!

MT – Any favorite songs from that album?

SS – Personally, I like Ragnarok, Facepalm Mute, The Gods Must Be Crazy, Erised and Froggin’ Bullfish the most.

MT – You’ve had your upcoming concept album “Juggernaut” in the works for quite some time. Can you tell us about it?

SS – You already know all I can tell you about it…. We just started putting together ideas for it and nothing is set in stone yet.

MT – Fair enough. If you could punch anyone in the face, who would it be?

SS – My grandma! Jk…. Probably the person who invented the word twerk. I fucking hate that word!

MT – Me too… Fuck that guy! If you could collab with any artists in the world, who would you work with?

MT – You have “This Tour Is Personal” coming up with one helluva line-up. How stoked are you for that?

SS – I’m mainly excited about getting to watch Twelve Foot Ninja crush it every night…. Oh and doing whip-its with BOO lol.

MT – What’s the craziest thing that has ever happened to you on tour?

SS – I smacked my face on a security guard’s head while head-banging on stage and received a nasty concussion. That was pretty fun… I had to wear sun glasses to night clubs for a straight week after it so I didn’t scare people. I didn’t think I’d ever have an eye swollen shut in my lifetime, but oh boy was I wrong.

MT – If you could tour with any bands in the world, what would the line-up be?

SS – Metallica and Megadeth. I’d just like to see how awkward things would get behind the scenes between Mustaine and Metallica hahaha. You need entertainment when you’re on the road! Either them or like John Mayer…. I love his music and you can’t beat the spread of women at his shows

MT – Any upcoming artists you would recommend?

SS – Definitely Twelve Foot Ninja. Check them out if you haven’t already done so.

SS – A good ol’ glass of Bourbon on the rocks or neat.

MT – Here’s the fun round… How about them juggies?

SS – I’m all about those juggies if in fact you are referring to the ones I think you are.

MT – Indeed I am. Anything you want to say to the fans out there?

SS – Yup…. They need to bring our Periphery ketchup and mustard shirts to the shows this fall and we’ll be holding the first ever condiment wall of death every night. Oh and also, thanks for the support you guys!