THE SAFETY FIRE – ARTIST OF THE WEEK CONTEST / INTERVIEW

We’re stoked to have some of the UK’s finest as our Artist of the Week. The Safety Fire are a force to be reckoned with. Their brand of Progressive Metal is both incredibly unique and consistent in itself (I mean that in the best way possible). The level of talent and forward thinking here is damn hard to match. If you haven’t listened yet, indulge your ears with the music at the bottom and you’ll hear what I mean.

We had to celebrate this occasion with regard to our followers so we’ve included a special opportunity. Look below and you’ll see the contest / instructions with your chance to win one of three CDs we’re giving away with the band. The album is The Safety Fire’s latest progsterpiece “Mouth of Swords”. Get with it or get lost.

We also had the opportunity to interview one of the band’s brilliant guitarists, Derya Nagle. Read up and learn as we get in-depth. Good info for longtime fans and newcomers alike. 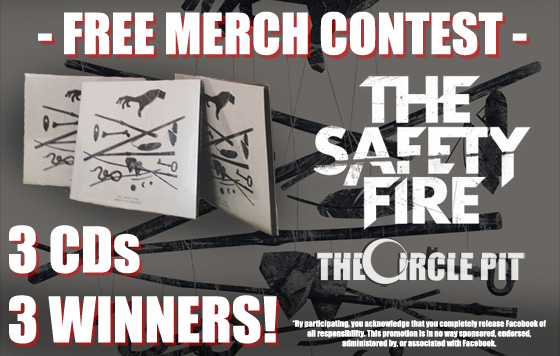 MT – You doing alright? Heard you had an accident.

DN – I was indeed in an accident, but fortunately, all is well. After a few operations my face and somewhat returned to normal.

MT – Good to hear man. FUCK THE SAFETY FIRE. How did that get started up?

DN – We were playing Download festival last year, and I said if we saw Chris Jericho to ask him to say it. So that was a running theme for that weekend, and we put out this video. Some people seemed to catch on to it, and it has become a standard thing for our fans.

MT – You just dropped a new album “Mouth Of Swords” merely a year after your debut “Grind The Ocean”. What was is like transitioning between those records?

DN – We had written and recorded Grind The Ocean about 6 months before we released it, so by the time we got round to writing Mouth of Swords we were all extremely excited to get back into a creative mindset. I think after touring for a year, we had learned more about ourselves as musicians, and I had personally definitely developed as a songwriter and a producer, so all in all I think that turned into a more focused output.

MT – How did the album get it’s name?

DN – It was a working title I had for the opening track, and we just felt it encapsulated the vibe of the album. I suppose the name has some representation of love and death and those themes run through the album.

MT – Any favorite songs from the new album?

DN – Really tough question, I’m extremely proud of every track on the album. I would probably say Old Souls, or Beware the Leopard (Jagwar). Getting Tommy to guest on the album was a huge deal for us, and it is still somewhat of a surprise to hear him on the album.

MT – How has the response been?

DN – The response has been amazing so far. I think the real test for us is going out and playing live and seeing the reaction from the crowd directly. Reviews from blogs, magazines and fans have all been really positive.

MT – How can I grow a mustache?

DN – Many months of patience, and self belief. There will be hard times, but the eventual glory will be worth it.

MT – How did The Safety Fire get started up?

DN – We started as a bunch of friends in school…and that was 10 years ago. Somewhere along the lines we decided we were going to be serious about the whole thing, and started to think about what we were doing musically and everything else that goes with that. It’s been a long road, but we have had a lot of fun.

DN – After 6 months of discussing band names, and many long nights at the pub, we eventually came to the name…not exactly sure why, but it was the first name we all agreed upon, so we stuck with it.

MT – How does the band typically go about writing music?

DN – I’m the main songwriter, and I usually start writing by just playing guitar until I start to form some kind of motif. I’ll record my ideas then start working on structures and arrangement with harmonies, rhythmic ideas and what not. Eventually I’ll have a pretty fully developed demo idea which I’ll bring to the band and we’ll fine tune things a little before myself and Sean get together to write and record the vocals together.

MT – What would you say are the band’s main musical influences?

DN – I think the main influences for us are bands like Deftones, Tool, Kaki King, Soundgarden, Prince, Peter Gabriel, Alice in Chains, Bjork, Between the Buried And Me, Karnivool..the list goes on and on. There are influences from hip hop, fusion, electronic music. It’s really hard to write a list which covers everything.

MT – I heard you’re going for a cruise soon. How stoked are you for that?

DN – Supremely hyped for that show! I actually met Mike Portnoy the other day and told him when I got the email from him offering the show I said I thought I had accidentally signed up to the Mike Portnoy forums. Suffice to say, it was rather surreal.

MT – That’s awesome. What’s the craziest thing that’s happened to you on tour?

DN – Calvin once ate five sandwiches. That is about as crazy as I can talk about.

MT – Understandable. If you could tour with any bands in the world. What would the line-up be?

DN – We tour the US with BTBAM, The Faceless and The Contortionist in September and October. We will be back in the US for the cruise and will be touring as much as is humanly possible.

MT – What is your favorite alcoholic beverage?

MT – Do you have any show rituals?

DN – Stretch out. Drink plenty of water. Practice some high kicks and eat a banana.

MT – Here’s the fun round… What does Yellowism mean to you?

MT – Anything you want to say to the fans out there?

DN – Thank you. Come say hi, give us a high five. Good time.