There is new a new doom hitting the scene this November with the return of Christian heavy metal artists Impending Doom through their 5th studio album “Death Will Reign.” This album was recorded, produced and mixed by musical genius of Will Putney (Fit For An Autopsy, Thy Art Is Murder, Upon A Burning Body, etc.) at the Machine Shop. If the thought of the penetrating brutality that this record encapsulates does not quite get you all hot and bothered, perhaps Impending Doom’s record label, eOne, can get your testosterone flowing and fuel your anticipation for this monster release by their declaration about the record which states, “Prepare yourselves for one of the heaviest records of 2013!”

“We wanted this album to sound very natural and unpolished,” explains longtime bassist David Sittig, a part of the lineup since before the first album’s release. “There’s no crazy digital stuff. There are no fake drums. We wanted it to have the feel of our first album with the songwriting from the last one. We’ve gotten better at song structures and so forth over the years, but we wanted to recapture that old-school vibe, too.”

Earlier today the band released the album title track song “Death Will Reign.” Check it out!

Once your neck gets a break from the spine breaking head banging that you just experienced, go HERE to pick up your pre-order bundle for Impending Doom’s new album which is available worldwide on November 5th! 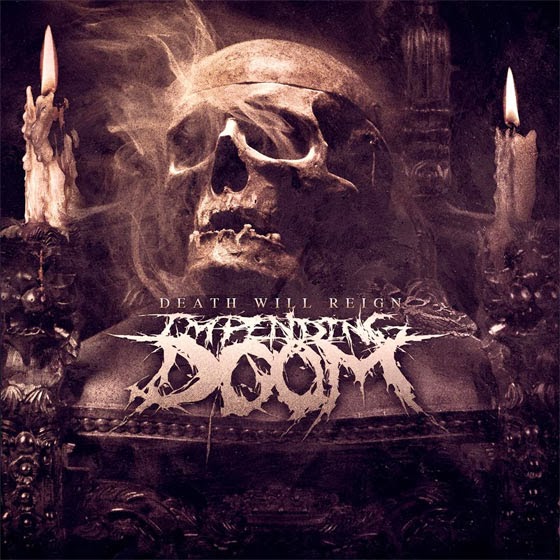