Welcome to Choice Cuts, you’ve stumbled upon the butcher shop themed segment where I pull out the entire hulking piece of meat that is a band’s entire discography, and slice you off the finest slab of choice cut, the best of the best. Sometimes I’ll be praising the standout piece of material in an otherwise passable career, other times I’ll be highlighting the best work found in a stellar band’s illustrious back catalog. Or maybe I’ll just be alerting you to some good beef you might’ve missed. Let me get to telling you what I’ve got for ya on the table today.

After a very extended hiatus, about half a year I believe, I’ve made my return and I’m back in business. To signal my return, I’ve found it only right to take on a legendary, genre leading, titan of a band. This week I’ve made satanic death metallers Deicide my target. After hacking up the band’s sizable and influential discography, I present to you all the choice cut ripped from the back catalogue of Deicide: “The Stench of Redemption.”

“The Stench of Redemption” came at a very uncertain time for Deicide. After pioneering the death metal genre and releasing the groundbreaking and successful records “Deicide,” “Legion,” and “Serpents of the Light” together, Deicide went through some tumultuous times in 2004. Internal disagreements led to a split between frontman Glen Benton and Deicide and both of the band’s guitarists, Eric and Brian Hoffman. Though not the band’s primary songwriters, the brotherly duo’s cohesiveness on guitar and deadly riffage played a big part in defining the signature Deicide sound. Without them, the future of the band was definitely uncertain.

Enter two guitarists, Jack Owen formerly of Cannibal Corpse and Ralph Santolla formerly of Iced Earth, and exit “The Stench of Redemption,” the best album that Deicide has ever released. The 2006 release simply outshines anything else the band has released. Not only does some dude on the internet, aka yours truly, deem “Stench” to be the best Deicide record, but so did the majority of critics. What though, caused such a positive change? Only indicators point to the new guitarists’ influence on the songwriting. While the Hoffman brothers added a volatile, violent touch to the guitar and soloing, it was the added melodic complexity and intricacy that pushed “The Stench of Redemption” over the top.”

On “Stench” found the perfect mix between brutal, pummeling riffs to cement the backbone of the song and melodic undertones and themes that were used to tie the compositions together and make the overall listen more cohesive and enjoyable. The pummelling riffs and pounding drums bring the brutality to insane levels, just check the first moments of the opening title track. The delivery and style of Benton’s growls make these tracks undeniably catchy to the point of ridiculousness: check the chorus of ‘Homage for Satan’ for this. And holy shit the shred. So melodic and technical and tasty. Once again the title track is the perfect example of this. And finally the compositional prowess and awareness adds the repeat listen value. All of this adds up to create the choice cut of the Deicide discography. Check it out on spotify below or buy it on amazon. 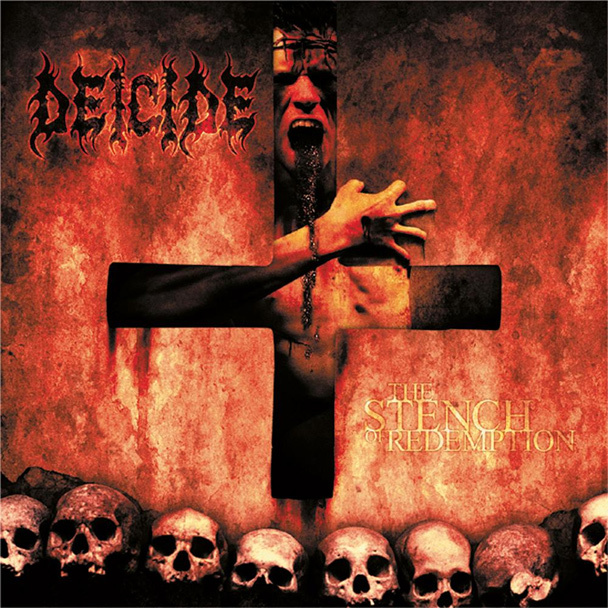