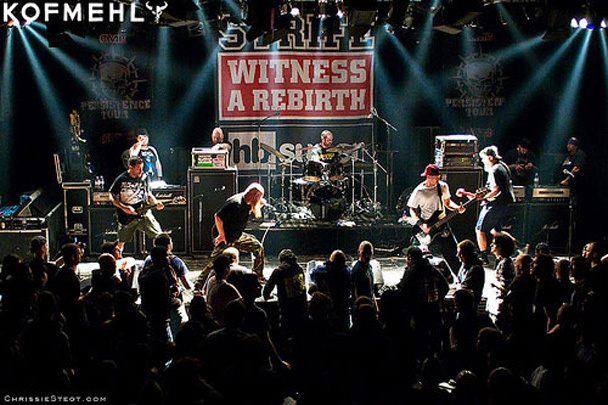 This story was initially brought forth by the Swiss media outlet Solothurner Zeitung and carried on by Lambgoat. We’re carrying it on for the sake of common sense and safety.

A 28-year-old man attending the 2014 Persistence Tour (featuring Suicidal Tendencies, Terror, Evergreen Terrace, and Strife) chose the wrong time to stage dive. Long story short, the crowd was not in a position to catch him – causing him to hit the ground. At first it seemed like he was alright until he suffered “unspecified complications” and “a possible seizure”. Ultimately, he died two days later.

Moral of the story – don’t attempt a stage dive (or crowd surfing) unless you know the crowd is going to catch you. In other words, make sure the crowd is packed together and going just as crazy as you are. It’s common sense. I’m not insinuating that this man was somehow lacking in this particular judgement. But obviously something went very wrong leading to these tragic circumstances.

“Unfortunately, the concert-goer was not properly caught after jumping from the stage and fell to the ground. A security guard immediately responded and immediately helped the man. Initially, the incident didn’t look serious. After falling, the man left the concert floor, washed his hands, and then immediately began to head home. According to Pipo Kofmehl, Head of the Cultural Kofmehl, ‘Our team decided, however, that he should immediately be taken to a hospital.’ Unspecified complications subsquently occurred, including a possible seizure.”

The heavy music community is a wonderful thing (when it’s not in civil war, elitist, hipster mode). It’s sad to hear about anyone involved meeting an end like this. I never knew this guy but it sucks to hear he’s dead, especially since it happened at an event hosted by our community, for our community. With a little common sense, this should be avoided moving into the future. Now carry on! Mosh, crowd surf, and stage dive! Just always be smart about it and stay safe.

Here are a few songs from the line-up we’ll play in this man’s honor: