A VISIT TO THE “FIGHT THE SILENCE TOUR” IN POMONA CALIFORNIA 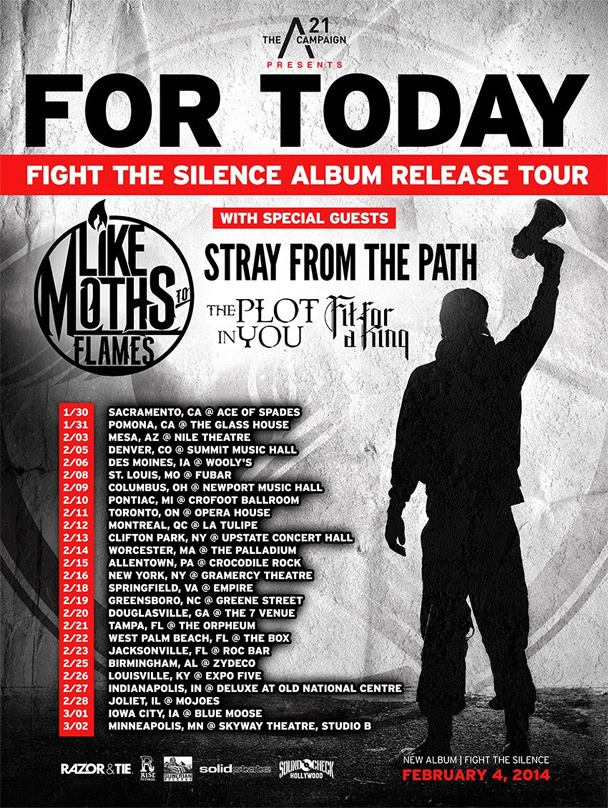 On 1/31, I had the opportunity to check out For Today’s “Fight The Silence Album Release Tour” at The Glasshouse in Pomona California. From the moment I arrived, I was struck with the notion that I was in for a fun night consisting of body-to-body comfort and high intensity performances. That is exactly what I got.

I had arrived just minutes before Fit For A King hit the stage and judging by the applause from the crowd at this sold out venue, it was clear to see that these metalcore manics from Dallas Texas were no doubt a crowd favorite. This happened to be the second time that I saw FFAK perform live and just like the first time I was very impressed with this bands ability to bring a sound that infiltrates the room on par with a mirror-like quality to their recorded album.

Next to perform was Findlay, Ohio’s The Plot In You. Personally I didn’t know what to expect from these guys since this marked my first opportunity to watch them in person. So with little-to-no expectations on the performance, I was most definitely swayed into a position from a listener to fan.

Similar to TPIY, Stray From The Path was an act that I was not familiar with at all. Their alternative/punk hardcore style was and is really not my forte, but if you are into that then by all measurable means they had the necessary ingredients to a great performance. SFTP had a hyped up stage presence that had great timing and a front man that uses the stage like it is his own personal bounce house.

Next up was another crowd favorite of the night, Like Moths To Flames. Overall, I felt that their performance was lacking just a little bit on the vocal ability due to the front man’s inability to match his voice to the pitch he hits on their recorded album. But, it was clear though that no matter how strong my opinion was, I was a loner in my feelings because the crowd did not waste any opportunity to go all out during LMTF’s set.

Finally, around 9:30ish, the headliners of the night hit the stage and that’s when everything changed. I thought Pomona was already on fire based off of the huge support that they were supplying to all the other bands, but For Today’s performance spiked the energy up in the room a few levels higher on the richter scale. From the opening song to the closing moment, For Today was impeccable. Every member of the band played as if it was the last show they were ever going to be in. Guitars were swaying, members were bouncing, and even drumsticks were flipping as the drummer, David Puckett, displayed his skillful ability. Not only was For Today’s performance off the hook, but it was very refreshing to observe a metalcore band using their pulpit to project a positive message. For several minutes Mattie Montgomery (For Today) opened up about his passion to rid the world of it’s modern day slavery: Human Trafficking. He called out for support from fans all across the metal community to raise their voices in unison to once-and-for-all rid the world of this vile situation and he pointed toward the A21 Campaign to anyone who desired to get involved in the movement. The band backed up their talk about this issue by informing all in attendance that a portion from the sales of their new album “Fight The Silence” would go to the A21 Campaign to raise funds for those trapped in a life of bondage. All-in-all this show ranks near the summit as one of the more memorable shows that I have been to and my advice to you is that if the “Fight The Silence Tour” has yet to come to a city near you, make sure your at that show when it does! \m/

See More: Badge & A Bullet, Fight The Silence, Fit For A King, For Today, Hardcore, I Solemnly Swear, Like Moths to Flames, Metalcore, Stray From The Path, The Plot In You
« NEW STRUCTURES 2014
INTERVALS “THE ESCAPE” SINGLE »