Legendary Death Metallers Aborted have let loose with the first single off their new album, “The Necrotic Manifesto”. The venture will be released April 29th in North America and the day before in Europe through Century Media Records. Take a listen just below! Also, give a listen to an additional teaser HERE!

Their frontman, Sven de Caluwé, had the following to say about the upcoming record.

“I can’t believe we did it to be honest. We had a little over 3 months from start to master on this record– everyone really gave 300% on this record, and it was an absolute pleasure to work with Jacob (Hansen) once again, who really pulled the best out of all our asses. I can say in all honesty that ‘The Necrotic Manifesto‘ is without a doubt the strongest record Aborted has done thus far and could not be more proud of everyone involved in the project.

It is the most brutal, extreme and technical record of the band without losing sight of groove and catchiness, which are all vital elements of this band. We cannot wait to get out there and start playing some new material in front of people and get some feedback on what we did in these intense months. Besides this I am very thrilled to have some of my favorite vocalists on this record as guests. Both Phlegethon (Wormed) and Vincent Bennett (The Acacia Strain) brought their own brand of burp to the table and really complemented the songs they are on! The artwork has been done by Par Olofsson (Pathology, Immolation, Immortal).” 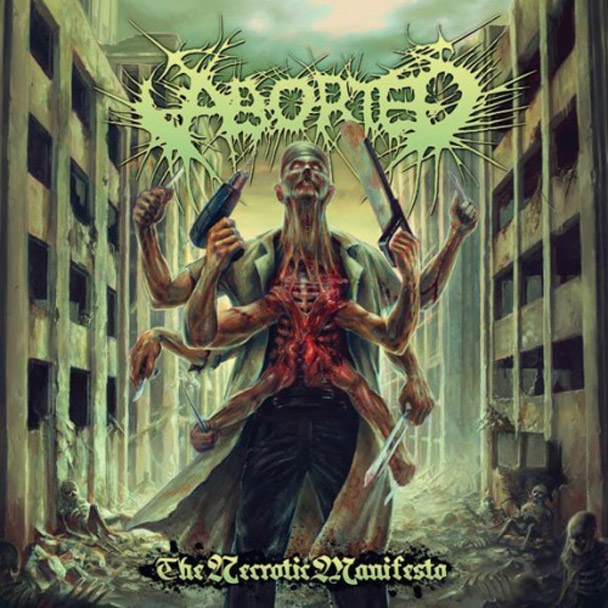