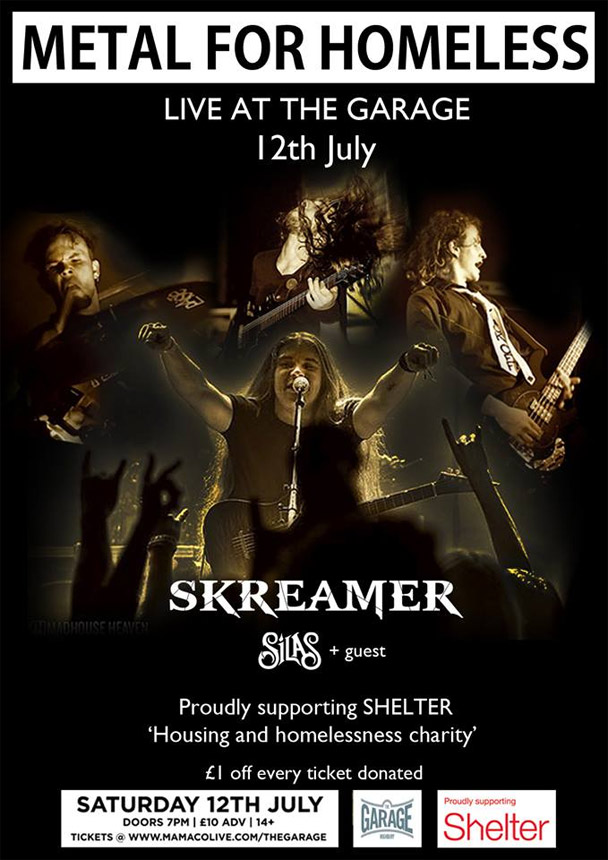 Every independent band has ambitions; build a loyal fan-base, play lots of shows, sell merch, become part of the underground music landscape and so on. But rarely does that ambition become a generosity of heart: Utilising the position their hard work and dedication has brought them to, for the benefit those less fortunate than themselves.

Well on July the 12th, UK metal Rising stars SKREAMER are planning to do just that. They are going to be donating all of the profits from their Show at the Highbury Garage to Shelter, the UK’s foremost homelessness charity.

“We decided we wanted to do something to help the homeless after gigging in a lot of towns and cities and being so surprised at the seriousness of the homeless situation.” Said Sam Mortar, lead guitarist and singer of SKREAMER.

“I even have friends from school who have found themselves on the streets. “ he continued. “We were in the van talking about how lucky we were and I suppose the desire to want to help started from there. And since we knew we would only be doing major London gig this year, we thought it would be the perfect opportunity”

“And Shelter being based just up the road from the Garage, we thought them am ideal partner. Obviously there are many charities that do a great job helping the Homeless, but when we approached them Shelter showed massive interest in what we were trying to achieve”

This will be the biggest venue that the band has headlined, information that makes their generosity all the more impressive.

“Playing the Garage is a real buzz, when you think of who has played there over the years it’s a bit surreal to think of us headlining it. We were so fortunate to have supported Anvil there last year.”

Supporting are hard-rock outfit SILAS and with more acts yet to be announced this promises to be an incendiary night of music.

Best experienced in the flesh, SKREAMER are a concoction of youth, energy and skill that given the chance will melt the ears of even the most hardened cynic. Their music is played very much with their hearts on their sleeves.

So, if you are at a loose end in London Town on July the 12th, Head along to the Highbury Garage and indulge both your passion for awesome Metal and your empathy for your fellow man.