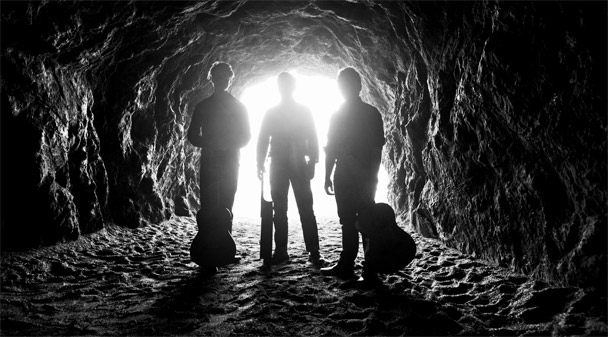 We’re incredibly honored to show you something entirely different today. Nick Vasallo, one of the leading masterminds behind Oblivion, wrote an experimental piece to be performed by a classical guitar trio. That trio is the Mobius Trio.

“Mobius Trio is an ensemble of three guitars that focuses entirely on the creation, performance, and promotion of contemporary art music. They seek collaboration with composers, performers, and artists of all stripes – nothing is out of bounds.”

Experience “Sometimes to Destroy, One Must First Create Part 1” below. We’ve also included comments from Nick Vasallo himself along with the program notes for the piece.

This amazing contemporary classical group – Mobius Trio, was on a Southern California tour and Cal Poly Pomona was their last stop. This is basically me forcing this classical guitar trio into the world of metal. The piece is more focused on texture than melody or harmony.

I wrote it very quickly before they hit the road so they could play it on their tour. They basically learned it as they played each show so when they got to my university they rocked it.

Program Notes
Composed from January 30th-February 2nd 2014. In this piece I wanted to dissect and destroy recent motifs that have appeared in my writing.