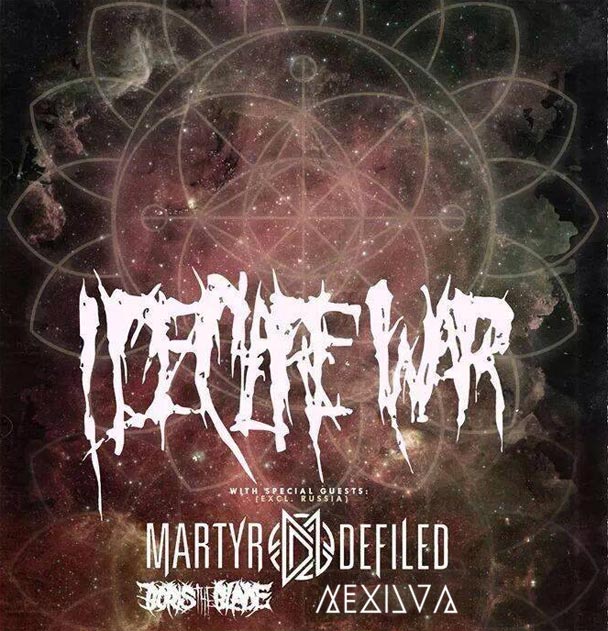 The East End of London; once the preserve of barrow boys, Pearly Kings and Jack the Ripper has become infected. Once an area of wholesome if rough handed honesty, it has become sick with the miasmic creep of trendiness that big cities have had to come to terms with. And as such, you are more likely to encounter pop-up street food outlets; novelty based graphic design companies and the musical fad de jour than any form of extreme Metal show.

Watches have obviously been wound and alarms have been set appropriately because as lights dim and the P.A trembles, a good 50 people sway away from the over-priced beers and pulled pork and towards the stage.

Opening up is London’s own Upholder, rolling out the barrel with their own blend of metallic deathcore. They effect is somewhat of enthusiasm over skill, like a pacemaker who sets out too fast. However they do have powerful, multi-phased vocals and employ engagingly different rhythms in their breakdowns. Even though their performance doesn’t quite hit the spot tonight, it was intriguing enough to make we want to catch them again.

Following swiftly on after them is Nexilva. Who quite frankly scare me. The brooding atmospherics of their music and the aggressive, sinewy precision of their playing is always a darkly delicious pleasure. They streak through 7 cuts from their just released album, Eschatologies with not a moments repose. Pushing their music to the limits of what their young frames will allow. Frontman Gary King’s posture is part praying mantis, part Gollum as he strains every nerve to match the powerful facility of the musicians. Though, as good as they are, I still think that Nexilva have room to grow and lessons to learn, so that they can craft the freshly mined diamond of their music into something truly exquisite.

Incitement to anger through anger is the only way its fit to describe Australia’s Boris The Blade’s live show. It took them 30 hours on a plane to get to the U.K and Vocalist Daniel Sharp patience seems to have been tested by every moment as he roars like a man possessed over the bullishly brutal, chest thumping ‘core his band purvey. But their performance is not a runaway train; it is a controlled engagement with rage. Will Haven style high end wall-of-sound harmonics compliment the pulsing wave of belligerent menace that is their stock in trade. Boosted by their unalloyed joy at being an international touring band, they induce a sense of perpetual momentum into the crowd. Wheeling slam pits and flailing arms, testing the utter indestructability of the warehouse venue for the first time tonight. Daniel Sharp is the size of a door and watching BTB is like being hit in the face by one. In the nicest possible way, of course.

Next up is Martyr Defiled with their utterly distinctive brand of techy, punkish, deathly groove-core. A little more prosaic in their delivery than Boris, however when they are playing they roll as a powerful cohesive unit. Motivating circle pits and mike grabbing enthusiasm from the denizens of deep-slam. That they tick all the boxes that the slam kids require as well as being tantalisingly experimental in their approach made watching them a real pleasure. Undulating grooves partnered by garish and florid breakdowns in a way that is somehow uniquely British.

Finally this leaves us with the Main Event and I Declare War is very much a band for high occasion. Once seen never forgotten. Jaime Hanks is as prepossessing a front-man as you could imagine. A shock of black hair, unfettered beard and strong tattooed arms make him appear like Poseidon. Stalking the stage like a titan, bellowing his anger at corruption and greed.

Precision blasts and searing guitars pummel the last traces of resistance out of the crowd. Experiencing I Declare war is very much like being caught in a machine. There is no will strong enough to resist your inevitable capitulation. Even attempting so is an exercise in the most abject futility.

They are experienced hands and with deft and powerful prescience lift and drop riffs and pacing down on the heads of the crowd. Their no holds barred set is the crowning glory in what has been an indelible nights music.