RECAP – MESHUGGAH 25TH ANNIVERSARY SHOW WITH BETWEEN THE BURIED AND ME 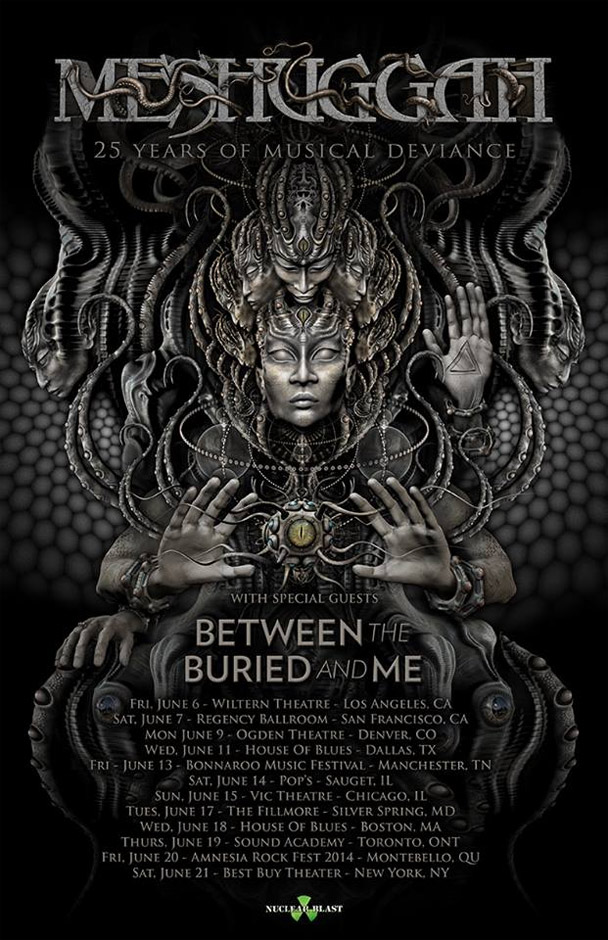 On June 6th in Los Angeles, California, the legendary Swedish extreme metal band Meshuggah kicked off their 25th anniversary tour celebrating “25 years of musical deviance.” Meshuggah decided to take North Carolina’s progressive hardcore unit Between the Buried and Me on the road with them, treating fans to two of the most musically masterful acts in metal.

Between the Buried and Me warmed up the crowd nicely. They’ve been described as the “thinking mans hardcore band” and that is exactly how they sound like. BTBAM was right on point with all of their music which goes all over the place, but it still works and it’s brutal. They got the crowd going just enough before Meshuggah, almost like foreplay before sex starts.

There's a lot to be said about how fucking well Meshuggah performs live. Time seems to slow down when you just sit back and watch them (if you decide not to mosh during). They are literally fucking perfect performing all of the crazy polyrhythms, time changes, and syncopated picking/drumming that they have become so famous for. What’s cool is Meshuggah crafted their setlist by doing a voting poll on facebook, which involved fans picking their two favorite songs off of each Meshuggah release. The songs with the most votes for each album would be added onto the setlist, amongst other favorites that couldn’t be left out. Meshuggah shocked everyone in the crowd by opening up with “Future Breed Machine” which blew the goddamn roof off of the Wiltern. The pit was absolute madness the entire set. Frontman Jens Kidman has this sort of evil aura surrounding him as he commands the stage. Drummer Tomas Haake is literally a machine, I’m not convinced a human can maintain those crazy rhythms. The setlist was everything you could have asked for. The entire night was an amazing celebration of Meshuggah and the music they have made over the years. Heres to another 25 years of musical deviance \m/

See More: 25th Anniversary Show, Between The Buried And Me, Math Metal, Meshuggah, Progressive Metal, Tour
« PROTEST THE HERO TO TOUR EUROPE WITH THE FACELESS AND THE CONTORTIONIST
SUICIDE SILENCE STREAMING NEW ALBUM “YOU CAN’T STOP ME” IN IT’S ENTIRETY »