For the Groove Metal enthusiasts out there, living in any corner of the motherflippin’ galaxy, Chimaira has been the Slayer of Groove Metal, hands down. The longstanding anomaly about this juggernaut brutal act was that vocalist Mark Hunter was by a long stretch the only surviving member of the band. Chimaira nearly produced a gem of a New Wave of American Heavy Metal record every time since their still- hard- to- digest- debut. Hard to digest why? Only because it pales in comparison next to the heaviness of its future counterparts.

Chimaira have evolved with every album progressively with members surviving not more than 2-3 albums at the max, save for Hunter. After the bands existing members for the last time announced their departure last week, most of us where almost ready for a big announcement in the next few months when the band would resurface again in a new avatar with a new single to promote the new line up and album. But sadly, not this time. Vocalist Mark Hunter posted the following picture on the band’s social media shortly back to draw the curtain on one of American Heavy Metal’s most underrated acts of all times.

Even though recognized by their tendency to lean towards butt ripping riffs and Hunters blood boiling growls that can infuse adrenaline even in the weakest of souls, Chimaira somehow always flew the radar compared to its contemporaries such as God Forbid and Shadows Fall who also announced their break up earlier this year.

Mark Hunter had the following to say: 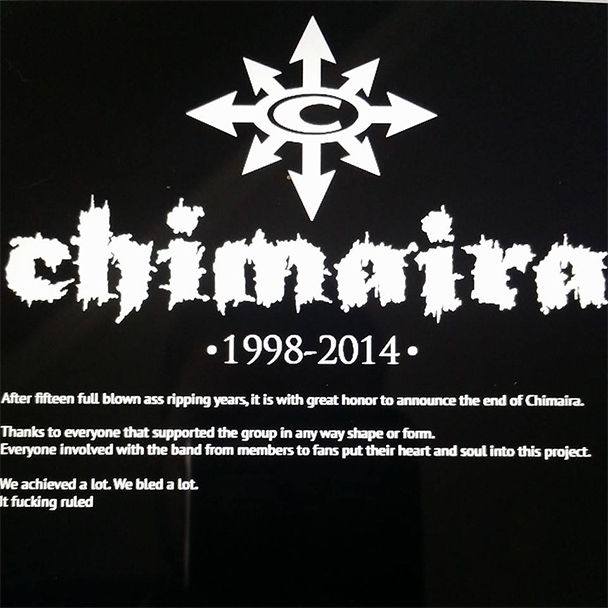 With the breakup of one the most influential acts for those middle children of Heavy Metal like myself who grew up on acts like Chimaira, Slipknot, Lamb of God and Machine Head it calls for almost a worldwide moment of silence to honour the band. Known better for their singles like “Year of the Snake” and “Pure Hatred”, Chimaira’s “The Infection” will for remain my favourite album by the outfit, probably because it comprises my favourite Chimaira track, “Frozen in Time”.

Scroll down for the Chimaira special playlist we have prepared to relive the bands brutal ways: