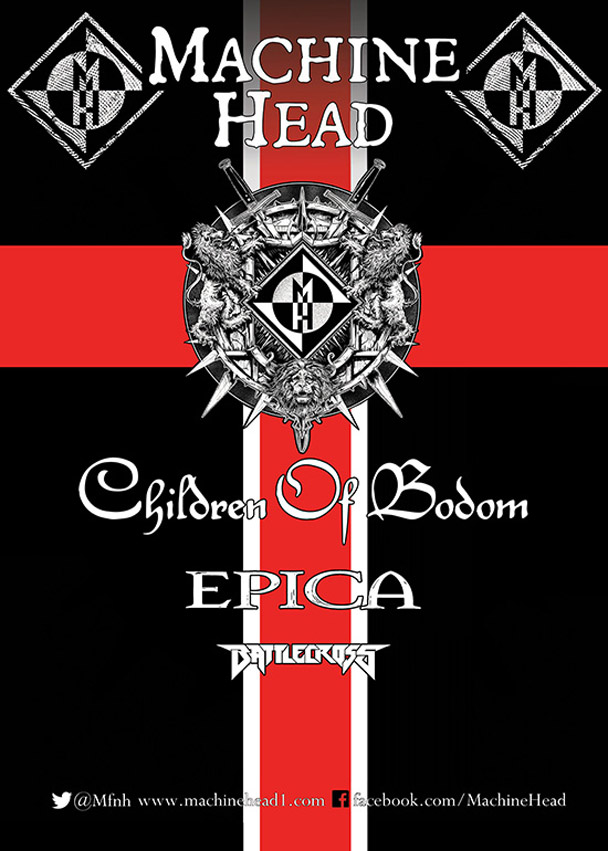 A Recent update posted from Machine Heads Facebook has told fans of the American Heavy Metal band that they have had to cancel all of their North American tour dates along side Children of Bodom, Epica and Battlecross, reason stated due to the band needing more time to work on their new album “Bloodstone and Diamonds”.

This is quite a rare occurrence that a band as big as Machine Head have had to cancel a full tour to finish a record and it will surely annoy a hell of a lot of people that already had their tickets bought and paid for, especially considering the announcement comes just 2 weeks before the tour was supposed to begin!

The tour was set to begin on the 1st of October in Denver and end in Los Angeles on the 4th of November playing a total of 22 dates across North America. Read Machine Heads full statement below:

“It is with great disappointment that Machine Head must announce the postponement of our North American tour this fall. Our new album “Bloodstone & Diamonds” has taken longer to complete than expected and we had to make the difficult choice to either delay the album, let it go out as incomplete, or cancel the tour in order to properly finish and promote the album in the caliber it needs to be done. We decided postponing the tour was the best decision for the record.

We feel this record is a milestone, we feel we have something truly special here, but getting there has been a challenge. Our vocalist / guitarist Robb Flynn just returned from a press tour where he was playing rough mixes and incomplete versions of songs for the press just to try and keep everything on time for our November release date.

Refunds will be available for tickets at point of purchase.

Look out for rescheduled American tour dates for the beginning of the year.

All scheduled European tour dates will remain as scheduled.”

“Bloodstone and Diamonds” is due for release November 7th, 2014.