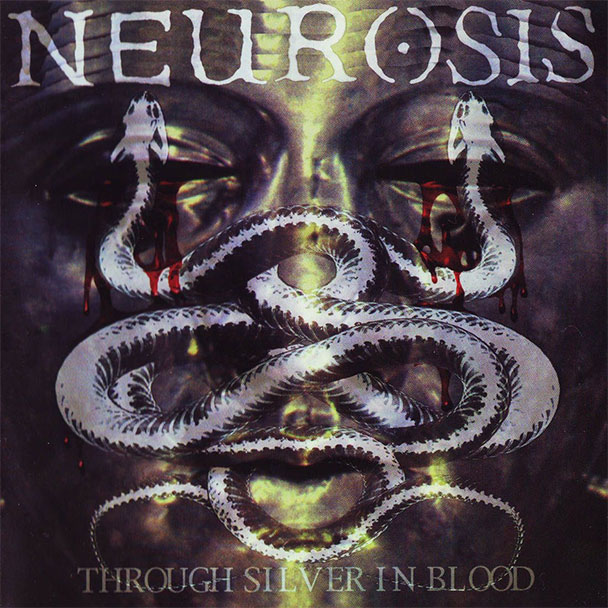 My first ever job was as an office cleaner. I’d just started post-high school education and my Mother insisted that to continue living within the confines of her house and the embrace of her good graces I would have to start earning my keep. So from 6 to 8am every morning I would go and hoover carpets and empty bins in the local council building.

This princely occupation would realise me just over £200 a month; 90% of which I would duly spend at now sadly dead 2nd hand record shop. I can still recall my first visit and more importantly, my first purchase: Through Silver in Blood.

It called my name from across the shop, the cover seductive in its reptilian subversion; snakes layered over faces, imposed on a torturous twist of colours. I had no idea what to expect from the band but their name spoke volumes to my angst driven teenage soul. Neurosis.

I must admit that up to this point I had become accustomed to being somewhat pandered to by bands. The music I listened to was made by people who wanted to entertain and wrote songs to get to that end. But here was a horse very much of a different colour.

From first listen its miasmic enchantment of apocalyptic soundscapes and tortured evisceration captivated me. Initially through a glass of darkened curiosity and then as the layers began to peel away and understanding took hold, its febrile genius and artistic resonance burrowed deep into my psyche.

Ostensibly about the slow moving, unyielding persistence of evil; T.S.I.B is for me Neurosis’ finest moment. Never shy of experiment, they seem to have on this release contained their trials to the rehearsal space and scratched into plastic the concentrated essence of their most insidious machinations.

What they produced is a powerfully heady cocktail of industrial, doom laden, hardcore sludge. But such is the precision of vision that the album widens the eyes like a Gothic horror set to music; sounds and smells of work and bondage simultaneously ringing both true and feint; what is apparition, what is reality?

Heavy as Hades hardcore riffing, provided by Scott Kelly and Steve von Till, interpolated with squalls of white noise propel the songs with a momentum that slides wraith-like like from shoulders to hips. Making it both compulsive and compelling to headbang to. The bass, separate and stealthy entwines with the Industrial -tom focused- drumming like the claw of a bear encircling around your leg, to pull you inexorably downwards out of the tree of ignorance, towards darkness, death and understanding.

In many ways this record is an paragon of efficiency and motion. As Neurosis seem to be able to say more with a single note than a lot of groups say in their whole careers. All the while engaging the listeners with a continuous and unending flow of venom; albeit venom moulded into a series of trance-like frequencies and death defying metal tone poems.

Prior to this album I had been a schoolboy; uniformed and bespectacled; free of responsibility except when it came to the exam hall. But by that fateful September day, I was becoming a different being; one no-longer wrapped in the cosy half-truth of childhood but a man facing the demonic false-promise of adulthood straight in the eyes, Vacuum Cleaner in my hand and Neurosis in my ears. I wouldn’t have had it any other way.