Hell descended upon the city of San Bernadino this October. Knotfest 2014 was one of the biggest metal festivals that California has ever seen. Those who attended experienced 2 days of utter madness (3 if you had VIP tickets or a car camping pass) which included 2 headlining performances by Slipknot each night. With 5 stages, carnival rides & games, a Slipknot museum, tattoo artists on site, motorcycle jumps, and a caged ring for fights; I knew this festival was going to be one for the books.

Unfortunately I was not able to attend Friday night’s festivities, which is really disappointing because I would have loved to have seen The Black Dahlia Murder or Suicide Silence. I would imagine both of those bands would have put on great shows, but oh well, life goes on. The Knotfest Facebook page had courteously posted pictures of what the set times would be a couple days prior to the festival. 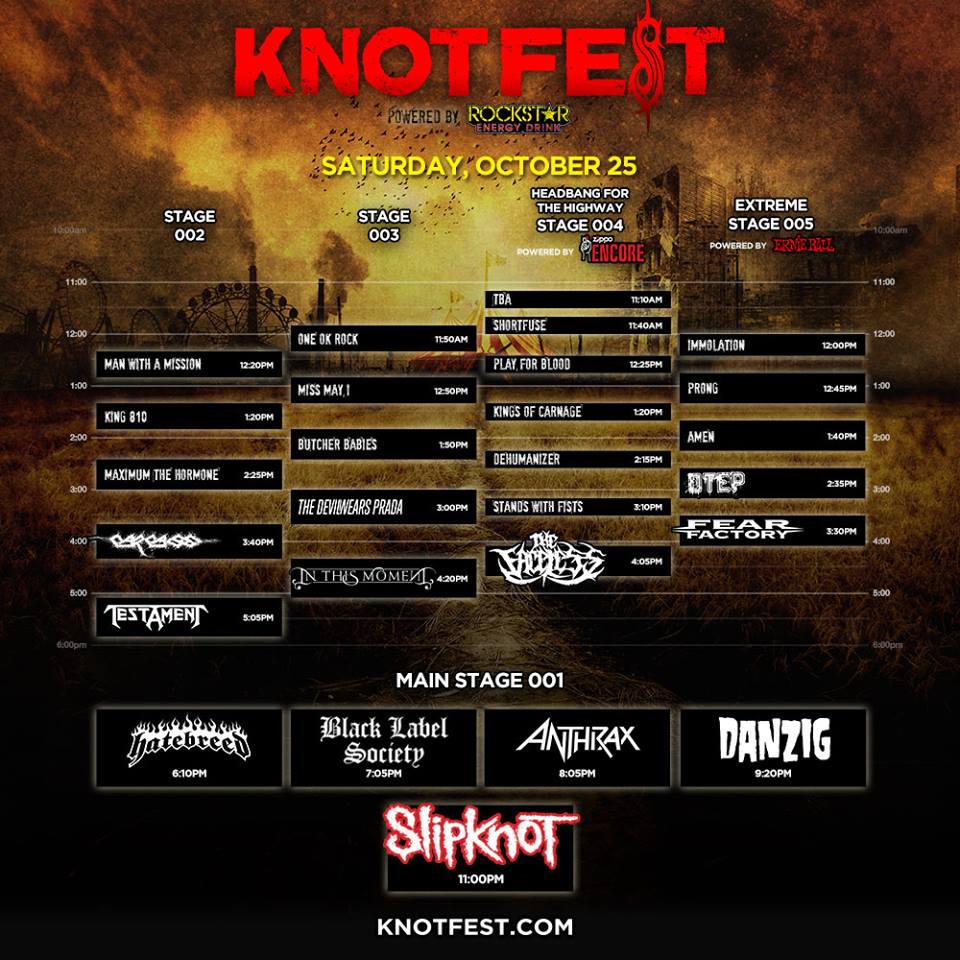 I arrived on Saturday just in time to catch King 810’s set. For those who don’t know King 810, they sound like what Korn SHOULD sound like in 2014. They combine elements of nu metal and straight up hardcore to make a stripped-down heavy sound. These guys hail from Flint, Michigan; the most dangerous city in the United States. With song titles like “Killem All”, “Murder Murder Murder”, and “War Outside”, its not hard to see why King 810 is known for having a violent following of fans. All of that set aside, these guys played a good fucking live show. The word I would use to describe their stage presence would be “ferocious”. They brought out stools and fences on stage just for the purpose of smashing the shit out of them during their performance. Frontman David Gunn actually climbed up the railing of the stage while performing the song “Treading and Trodden”. In a musical climate where everyone is trying to be increasingly technical in an attempt to be brutal, it’s refreshing to see this simple, bare approach to heavy music. They show that all you need is 1 guitar, a bass, drums, and a guttural voice to make something brutal.

I heard a little bit of Butcher Babies set while checking out the Rockstar Energy tent (they were giving out free energy drinks all day), and wasn’t too impressed. Whoever was doing their sound was way off and their music sounded jumbled and just not good. Next up for me was Maximum The Hormone out of Tokyo, Japan. I have never enjoyed a band, that I didn’t know prior to seeing them, more than these crazy motherfuckers. I couldn’t even tell you what songs were played but I loved every minute of it. They sound like a cracked out System of a Down that incorporates breakdowns and poppy anime music. I later found out that their song “What’s Up” is the opening track for the television series “Death Note” , which is a really good show for those who are into anime. They were high energy and kept the crowd going absolutely insane the entire set. People were even going nuts when they would speak to the crowd in Japanese (they apparently don’t speak a lot of English). They made a fan out of me real fast, so you guys should take a listen to the chaos that is Maximum The Hormone.

I’m not a Devil Wears Prada fan at all. I had seen them at Warped Tour and was incredibly bored. So I decided to skip their set, get some food, look at some motorcycle jumps, and get myself ready for Carcass. Anyone who isn’t into Carcass needs to reexamine what they are doing with their life. Out of Liverpool, England; Carcass are regarded as pioneers of grindcore and melodic death metal. Their set comprised of songs mostly from the “Surgical Steel” and “Heartwork” albums. They were so on point the entire time. It was very captivating to watch Bill Steer and Ben Ash trade off solos so seamlessly with almost surgical precision (heheheh). Jeff Walker was hilarious in between songs. I especially loved it when he said something along the lines of “breakdowns in the 90’s, look at that!”. All in all Carcass made it look easy and put on a hell of a show.

Then came the almighty Testament. I had never seen them live before, and heard that they were great live, so I was pretty excited. They used the Star Spangled Banner as an introduction, then kicked off the show with some of their newer material. The trash legends  then went into some of their classics. The highlights of the show for me were definitely “Into The Pit” and “Disciples of the Watch”, just because those are some of my favorite Testament songs. Some asshole decided to get up on stage and start climbing the railing, which prompted the band to stop “The Formation of Damnation” early, just so Chuck BIlly could tell the guy to get the fuck down. For some reason their music has so much more of a huge dominating sound live as opposed to listening to the records. Their set had just the right amount of songs showing off the different points in their career. My only complaint is I wanted “Alone in the Dark” so badly, but oh well.

Everyone then migrated to begin the madness at the main stage. What better way to start off the night then with one of my favorite hardcore acts: Hatebreed \m/. These guys have been kicking ass since 1994 and they showed that they still fucking got it. They kicked off their set with “Everyone Bleeds Now”, a classic, which got the crowd all nice and violent. They then went into one of their newer tracks “Honor Never Dies” which I’m a fan of, but the crowd wasn’t as into the song as some of the others in the set. Sporting a Death shirt, Jamey Jasta was able to get the audience all energized and warm up the night nicely. Every song that was played had high intensity, and sent the crowd into an animalistic frenzy. I believe that everyone should see Hatebreed at some point in their life, if they want to see a real fucked up mosh pit. Highlight song for me had to have been “Perseverance” just because I didn’t particularly expect it. What would have made the show perfect is if Eddie Hermida came out and do “Last Breath” with the band, but Suicide Silence had already continued on their tour and that wasn’t possible.

Theres not much for me to say about Black Label Society’s performance. I’m not super into their music and watching them live wasn’t doing that much for me. It was kind of cool to see Zakk Wylde and all of the gravitas that surrounds him when he plays solos (with so much wah that it would make Kirk Hammett jizz in his pants). But other than that I was pretty bored during their set. After them were the thrash gods out of New York: Anthrax. They started off the show with “Indians” then “Caught in a Mosh”, which was fantastic. Anything off of “Among the Living” is definitely appreciated. This was the 4th time that I’ve seen Anthrax, and each time they’re so damn entertaining. They revealed a snippet of a new song before going into “I Am The Law” then closing out the show with their Trust cover of “Antisocial”. These guys are in my opinion the best, and most underrated of the big 4. Seeing Anthrax is always a fucking party and they in my opinion should have gone on after Danzig.

Danzig was so goddamn disappointing. I’m not very knowledgeable of their music besides the song “Mother” or some Misfits stuff, but I at least expected some sort of good performance from the band that was going on right before Slipknot. Glenn Danzig literally sounded like Kermit the Frog when he would try to sing. He also kept moving the microphone away from himself before he would finish lines which sounded awkward. The guitarist could not stop fucking around with pinch harmonics the entire performance, which got incredibly redundant very quick. I was trying to give them the benefit of the doubt because they are getting up there in years, but I just couldn’t help being thoroughly unhappy for the duration of their set. At this point I was just waiting for Slipknot to take the stage for their first performance of the weekend.

The air was filled with anticipation (and luckily not the scent of burning camel shit) when the curtain dropped and the wait began for Slipknot to take the stage. No one knew what to expect when it came time for them to play. There was wonder if they were going to play anything special for their own festival. They took the stage and opened up with “515/People = Shit” which set the night off with a fucking bang. It was one of the most intense crowds I have ever seen. They then played “Eeyore” which shocked the crowd, considering it hasn’t been performed since 2008. Watching Slipknot live is like watching the end of the world on stage. They had an elaborate stage set up and brought so much fucking energy. This was the first performance with new bassist Alessandro Venturella and their new unconfirmed drummer (COUGH COUGH JAY WEINBERG) and they didn’t miss a beat. This was also the first time they played anything off of their newest release “.5 The Gray Chapter” which included the songs “The Negative One”, and “Custer”. For the most part the rest of their set consisted of the hits. Although the songs  “Three Nil” and “Purity” made their way in there, which was a nice surprise. They closed out the night with “Spit It Out” with the infamous “jump the fuck up” ending; and the maggot national anthem “Surfacing” which of course ensued with crazy moshing. The performance was evil and magical. The first day had left me completely drained of energy, and 100% satisfied. I couldn’t wait for what was going to come next on day 2.

Mini-rant time: San Manuel Amphitheater, you NEED to redesign your parking lots. It’s ridiculous that all of the lots need to funnel out in a single file with only two exit points. Not to mention there wasn’t anyone directing the flow of traffic in the lots which caused a huge clusterfuck and kept everyone in gridlock for hours. Get your shit together.