If you read my series of articles counting down to this years TechFest you may well remember Valis Ablaze. At the time I described them as "sounding like Meshuggah, if Meshuggah came from Bristol and had a sense of humour", while this glib assessment may be all well and good for a festival build up, its no way to treat such a hard working and dedicated band. So when the opportunity arose to catch up with this bunch of Bristolians earlier this week, I gladly took it. Not simply to right my wrongs but to find out just what makes them tick.

CP: How has the last year been for you guys? What were your highlights?

This time last year we were opening for French prog monsters Hacride in Bristol and Cardiff (our 4th and 5th ever shows) with Ten Cent Toy and finishing up our Abiogenesis EP recordings. Since its release last December, we’ve promoted it hard and have seen the benefits from that. Opening for much bigger bands coming through Bristol and being offered shows as far as Manchester and Brighton. Also making good friends not only in those cities but with bands and people that support what we do or at least appreciate our attitude.

Playing Bristol Tech-fest with some big names such as Xerath did us big favours as we were invited on half of the Tour with No Consequence, Friend For a Foe and Drewsif Stalin’s Musical Endeavours which finished at UK Tech-fest. And they treated us like we were on the whole tour which made the tired drives that little bit better.
That was a fun experience and that has now set us up for more great shows around the UK as far ahead as March next year.

Our latest addition to our line up (Hugo) has also been a highlight for the rest of us as musically, we now feel tighter and more confident as a band. We miss our previous guitarist, Joel, but health comes first to him and availability is a must for us.
Pretty much everything we’ve done these last 12 months has really meant a lot to us and it has been ever so meaningful to get the support that we have. 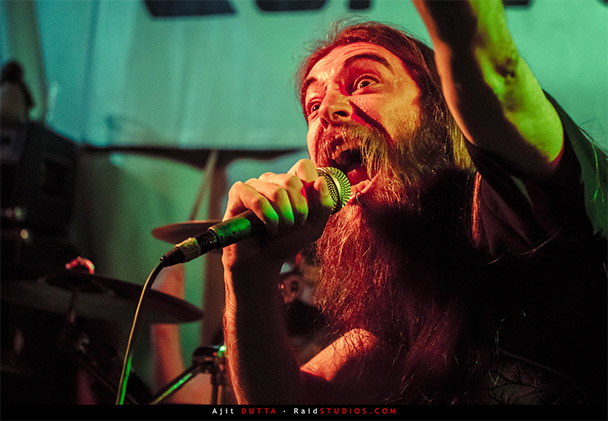 CP: What is your creative process, how do you write new material?

Previous writing methods included Ash and Tom writing the majority of songs and telling everyone how to play it haha!

Writing new material now usually stems with rhythms or riffs from Ash, Hugo or Tom (Guitars and Bass) and matching up each or modifying our ideas to then match up with what the others have brought to the table. We’re trying to be as equal as possible in that respect. And we’ll tweak the ideas and possibly write multiple versions with each members’ desired changes in each one.

We also write demo drums to help us get the feel of riffs we’re writing/having a hard time convincing the others over which then get modified by Rich as we tweak and work on the structure/dynamic/teching things up if needed. The lyrical side of things being handled separately by Adam and usually when the track is 90-100% complete instrumentally.

Guitar pro now plays a huge part in our writing process as it’s something that isn’t particular CPU intensive and means songs can be modified by all members of the band.

Jamming as a full band is often counterproductive. If we know something but can’t quite describe it through say limited theory knowledge or, even play it just yet, it can be a waste of everyone’s time trying to figure something out on the spot.

But we do have occasional jams which help us iron out kinks or misunderstandings. 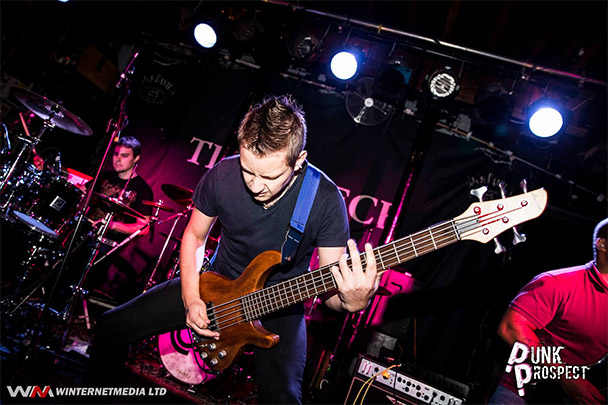 CP: When writing, do you focus on how it will come across live or how it can be controlled and tamed in the studio?

When writing both previously and now we just think about how good and fun it is going to sound and be able to play live and listen back to. In fact, we’d go as far as saying we write with the sole purpose of enjoying what we play. So much so that we don’t play songs that we don’t find fun anymore.

Our focus is staying challenged while making sure the listener can enjoy heavy groove with intricacies. Vocal wise, we know that not everyone may appreciate our live aspects put into the recordings but we believe if you record it for release to the world, you should be able to play it live. And vice versa. It’s another dynamic to our mix.

We take No Consequence as the prime example of this. Live, they are record perfect every time we’ve seen them.

CP: When I listen to your music I hear a lot of late 90's influence, bands like 1 Minutes Silence, The Pulkas etc. Who do you think are the main influences on your sound?

Haha, we know of 1 Minute Silence. The Pulkas are a band we’re not too familiar with but after a quick YouTubing of them, we know melancholic Nu-Metal has come to mind before. And it’s in the delivery, we think.

But our live sound and show often gets compared to System of a Down, Korn, Sikth, Meshuggah and Lamb of God.

On record, we’re honestly not too sure.

We all have so many influences but we’re really not sure if they shine through in the music.
Adam is a big Gojira fan, Rich a big Dream Theater fan and Tom a big Fellsilent fan and as much as we’d love to do what they’re good at or think we’ve pinched bits of those bands, we’re honestly don’t know.

But we’re sure these and other influences well seep through in the new material as we have made the writing process more equal to help hone our own sound. 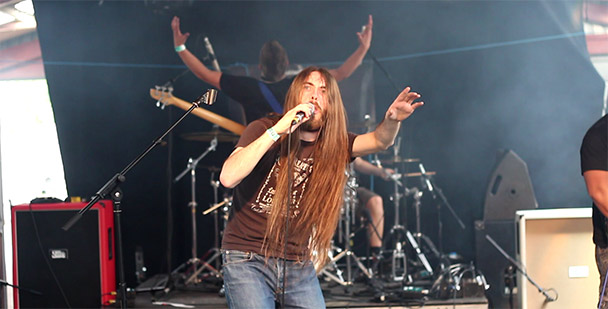 CP: You recently released a single that featured Phil from Orion, how did that collaboration come about?

We met the Orion guys in Manchester last Christmas at a show we played with them and then again at Bristol tech-fest in April. We’re great fans of their music and their show and they ended up also being lovely guys. Including Nathan.

So we camped with them at Tech-Fest and amidst the exchange of poo stories and northern vs southern banter, we realised we wanted Phil’s great voice on a track that felt like it was missing something. We were very humbled that he was willing to appear on Marionette and help us complete that version of it. And some of his ideas for the full version of Marionette were outstanding.

CP: Has becoming part of the wider Tech scene influenced your music?

Without a doubt! We’re now friends with bands that we love. That pushes us to better ourselves on our instruments, as musicians, to save-up and make use of the best gear and our show and showmanship. It’s like a friendly competition where we support and push each other. And we’ve had great advice from some of the bigger players who are just as open and friendly regardless of status.

We’ve still got some people win over as we know we’re not everyone’s cup of tea but, we won’t be adjusting our creative preferences for anyone. We wouldn’t release or play something if it wasn’t intended to be that way.

But skill wise, in the last year, we’ve met some incredible minds who have taught us so much musically and personally. The scene has helped us up our game. If we have game. What is game? 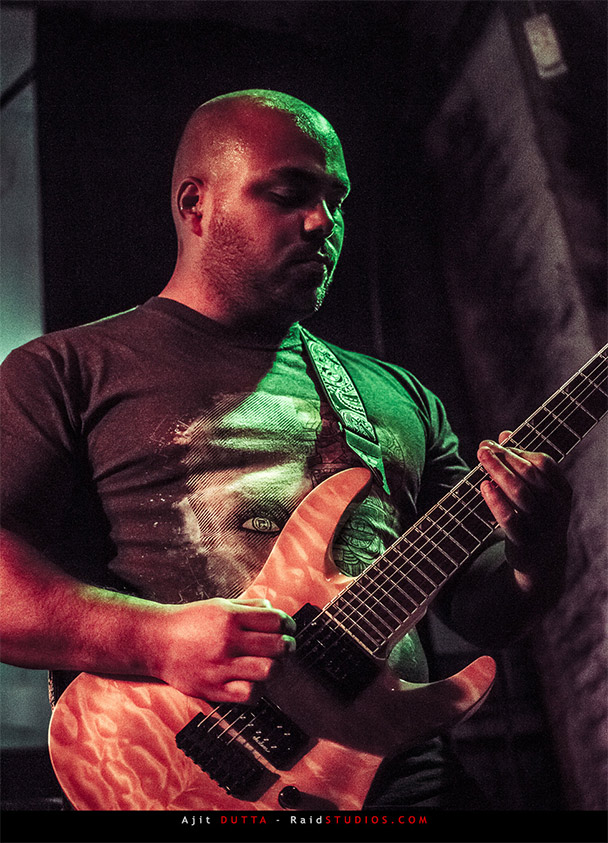 CP: What does being part of this scene mean to you as people?

It’s such a unique scene compared to others out there. The amount of different styles within the Metal scene alone is outstanding but the tech-metal clan are more accepting than most, we feel.

In Bristol, we’re dubbed as ‘a little extravagant’, the ‘drop-silly chug band’ or ‘not brutal enough’ depending on the scene. Which is a shame as we’ll play with almost anyone – as long as they don’t encourage crowd killing or racism/sexism/homophobia etc.

But this scene means we’re accepted. And metal heads should be uniting with each other, not splitting hairs over sub-genres and tones. We as a band all like a vast range of music from extreme death metal to pop and we’ve all been in bands that we perhaps didn’t have as much fun in musically previously. This band is about having fun and the music. The tech-metal scene seems most accepting of all of this.

It’s a shame that metal as a whole it is still misunderstood or even misrepresented in the mainstream media even in this day and age but there are many bands that are starting to change the opinion of people who generally didn’t listen to Metal before. And many of the tech and prog metal bands are pushing boundaries in terms of song writing, genres and their live show thanks to technology and the desire to reach more people with their music. It’s exciting to be in this scene right now. Things are looking up for underground music! Ultimately, it means a future.

CP: What is next on the agenda, are you writing an album?

Well, we recorded 3 singles a few months back and only 2 have been released. We plan to release the last of those 3 as soon as the music video is ready – hopefully before the end of the year.

We say roughly because you don’t know where the song will go. And not everyone may be happy with the amount of content or the concept of the song. We can only meet once or twice a week so the next time we revisit a song in progress, it can change dramatically. And that’s fun and stops ideas going stale. It’s fun to tweak ideas right up until the last minute and ensures we then stay happy with what’s recorded for release.

After that, we shall see what’s in store for us and try to play as many shows as possible while constantly refining our live sound and show. And trying to reach as many people as possible. There are people out there that like us and our music and there are some people out there that don’t. But there are still millions of people that haven’t heard our music yet and they’re the people we need to reach. Whilst keeping current fans entertained, of course.

We’re chomping at the bit for another big opportunity and we’re not afraid to put in the work for more too.

We’ve got high goals and plans to achieve them but having fun is pretty much top of our to-do list. 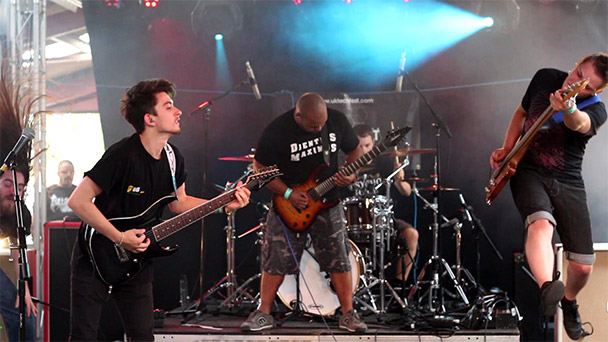 CP: Robert Percy is a big fan of yours, any plans to have him guest on a track?

As most of the tech scene know, Robert is a big flake! #shotsfired

We’d invite him to do something but we know he’d bail on us. And that’s not us being harsh either – we know Orion may vouch for us… ask them ;-)

But in all seriousness, we have selected but not necessarily asked all the guests that we would love to have appear on our debut album. Most of these were picked before we’d even started writing the album with some song writing considerations for them being made as we speak. But we are very thankful of all the promotion and kind words Robert gives us. He saw us as a four piece in Manchester back in July and seemed to enjoy every minute of it.