After a full day of debauchery and chaos, it was time to get up and do it all over again. The sun was shining and the birds were doing guttural pig squeals. With almost no energy and beginning to feel sick, I was still psyched to see what kind of nonsense was going to go on during day 2 of Knotfest. 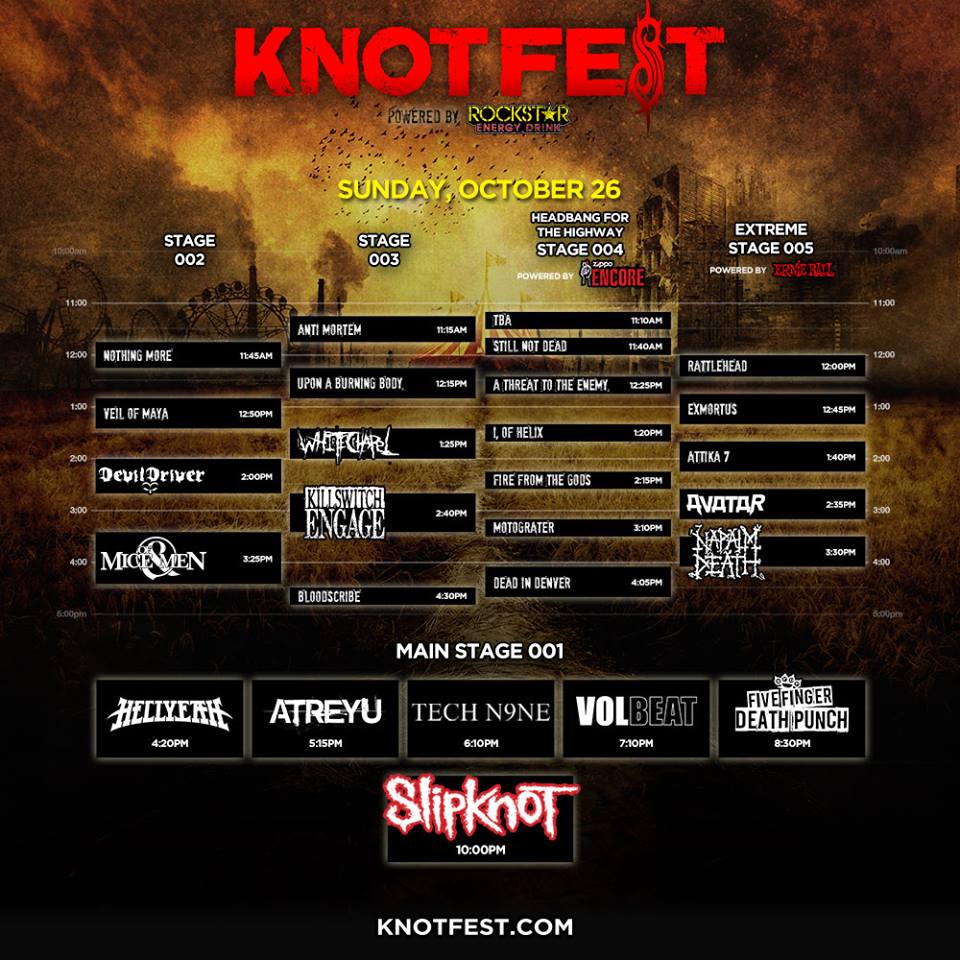 On sunday I had just arrived in time to catch most of Veil of Maya’s set. They were accompanied by Lukas Magyar from the band Arms of Empire on vocals. Whether this means he’s the new vocalist or not has yet to be confirmed, but he did a great fucking job. They opened up the show with their newest track (even though it was released over a year ago) “Subject Zero” then proceeded onto my personal favorite “Punisher”. I kind of wished that they would add a 2nd live guitarist as opposed to using back tracks for the weird guitar parts while Marc Okubo just chugs away, but it was still mesmerizing to watch him play. They were definitely a good choice to start off the day. They closed the set with the song “It’s Not Safe To Swim Today” which got everyone nice and lubed up for the all out assault that is Whitechapel.

Then came the deathcore juggernauts out of Tennessee. Whitechapel puts on one hell of a live show. Vocalist Phil Bozeman is so brutal it’s inspiring. My major concern with their set is that they played absolutely nothing from their first 3 releases. I understand that you want to show off your new material, and it is some good stuff, but you should acknowledge the fans that have stuck with you for years. Not even “Possession” was played and that used to be one of their biggest songs. They had a decent mix of their latest release “Our Endless War” and their self titled album. The best part of their show would have to be the wall of death that was organized before the song “I, Dementia”. The mixing was a pretty off, you couldn’t hear the drums that well and it made them seem off time. Overall it was a pretty good performance, a little less than what I expected but still good. Whitechapel are currently out on tour with Upon a Burning Body (who I wish I could’ve seen) and Glass Cloud (WHO SHOULD HAVE BEEN PLAYING AT THE FESTIVAL MY FUCKING GOD).

I’m not really into Devildriver that much. The only standout moment I can recall from their set was the song “Clouds Over California”, and thats because thats the only song I know by them. The rest of their set was okay. It does have to be noted though that this was the last time that the band performed with guitarist Jeff Kendrick and drummer John Boecklin before they left the band. I used the last part of their set to get some food and sights in before Killswitch Engage went on. I heard a lot about how Killswitch puts on a great live performance, so I was reasonably psyched. I personally prefer Howard Johnson’s voice over Jesse Leach, but Leach did a great job in a live setting. The set mostly consisted of their more popular songs like “This is Absolution”, “Rose of Sharyn”, and “My Curse”. They played some of their newer material, but it doesn’t do it for me that much. I particularly enjoyed guitarist Adam Dutkiewicz’ onstage banter in between songs. I was way more into these guys like 4-5 years ago, but they were incredibly fun to watch and lived up to their reputation for performing well live.

Up next were the masters of grindcore: Napalm Death. It was a real treat to see these guys live. Although I was a little upset that there wasn’t that big of a crowd for them. More people were gathering up for Of Mice & Men which is bullshit. Napalm Death completely shits on that band. I was more in the mood for crushing blast beats, fast tempo, and brutal, yet short songs; as opposed to generic lame metalcore. I made it over to their performance as they started “Silence is Deafening”. The highlight moment for me would definitely have to be “Suffer The Children”, although Napalm fucking killed it the entire time. They even played their 2 second long track “You Suffer”, which was hilarious. They play so goddamn fast it was sometimes hard to keep up, but it was beyond captivating to watch. They closed out with a Dead Kennedy’s cover of “Nazi Punks Fuck Off”, which was a fun note to end on. Then everyone made their way to the main stage for the final performances of the weekend.

I’m can’t talk a whole lot about Hellyeah’s performance without being too insulting. I’m not a fan of their music at all, regardless of who is in the band. Their set was borderline putting me to sleep. I took the time to get some more (expensive as fuck) food and check out some merch tables in depth. After that it was time for Atreyu to take the stage. I was a pretty big fan of their music during my awkward middle school years. There was a definite nostalgia factor while watching them together again. At this point I was ridiculously tired and wanted to save the remaining energy I had for Slipknot. So I decided to watch everyone else from the lawn and get a little rest. They kicked things off with “Bleeding Mascara” which was alright. To be honest whoever was doing their sound mixing was just not good. You could only hear one guitar and absolutely no bass. They showed off their new song “So Others May Live” which sounded reminiscent to their “Lead Sails Paper Anchor” sound. For a moment everyone got up on their feet for the Bon Jovi Cover of “You Give Love A Bad Name”. Other than that their performance was just solid. It’s a shame, it could have been such a better set if the sound guy was on top of his shit. Live and learn though.

Now it was time for the odd man out at Knotfest. The black sheep of the festival if you will (based on the genre of music he plays, not the color of his skin you racist fucks): Tech N9ne. For most of the festival I would overhear people complaining about why he was even performing. If anyone actually knows Tech N9nes music, you would know that he 100% deserved to be there. More so than some of the other bands that were there (I’m looking at you Five Finger Death Punch). He’s one of the most demonic performers in the game and fit the Knotfest theme nicely. I was honestly afraid he might have been booed off or something, but he actually managed to keep the predominantly metalhead crowd happy during his set. It was pretty relieving to see how well Tech was being received. My only complaint is that he only would play like half of each of his songs before just transitioning to the next thing. It kind of made the show seem rushed, like he just wanted to play and get off the stage as soon as possible. Other than that he was fierce. He was joined by a live band behind him which apparently he hasn’t done before. He was also accompanied by fellow labelmates Krizz Kaliko and Stevie Stone for most of the performance. My head would have exploded if Serj Tankian came out during the opening song “Straight Out The Gate” but the stars hadn’t aligned; and it wasn’t meant to be. I”ll get a lot of shit for this, but I found this performance way more enjoyable than the next two upcoming acts. I hope this is a turning point where we can start having more diverse shows in the future. Imagine a festival where Meshuggah and Flatbush Zombies were both playing. That would be fucking sick, but I digress.

I’m not a fan of Volbeat’s brand of “Johnny Cash metal” as I would call it. Not to mention whoever was doing their sound was royally fucking up. The only thing that would have made their set bearable would be if King Diamond came out to perform the song “Room 24”, but alas, it didn’t happen. Although they weren’t even as close to as bad as Five Finger Death Punch. Fuck that band. They kept complaining about the stage setup they were given and the amount of time they were given, which prompted them to play far past their allotted time. They also were the only band to NOT thank Slipknot for having them on the festival. It all came off as extremely disrespectful. They don’t make good enough music to act like they’re the shit. I don’t understand why so many people like their oversimplified poppy southern hard rock music. It’s basically just louder, more metallic country with some screaming. All I wanted them to do was to get the fuck off the stage so Slipknot would start their set faster.

Slipknot decided to open up their 2nd performance of the weekend with live debuts of the first 2 tracks off their newest release; “XIX” into “Sarcastrophe”, which was eerie, evil, heavy, and glorious all at the same time. All hell then proceeded to break loose when Corey started the chant “If you’re 555, then I’m 666” as the band began “The Heretic Anthem”. The band played a few songs that hadn’t been played in quite some time including “My Plague” and “Opium of the People”, (which was only the second time that song had been played ever). The only other new song they debuted was “The Devil In I”. Most of their popular songs were covered within the 2 nights. They even managed to play “Duality”, “Before I Forget”, and “Surfacing” for a second time. The only song that I was disappointed that they didn’t play “Everything Ends”. Despite that, their performance was diabolical and amazing; just like the night before.  Slipknot has arguably the best stage presence of any metal band. They almost make you want to start a riot. Not a whole lot of other bands are able to captivate and rile up an audience quite like them. This was the 4th Slipknot show that I’ve been to, and each time is as terrifying and exciting as the last. You should definitely check them out on their current “Prepare For Hell” tour if they want to see a real fucking show.


Knotfest 2014 was a fucking blast. The diverse lineup offered a little something for everyone; whether it was death metal, nu metal, hardcore, deathcore, hard rock, or even a little rap. The whole experience felt like a metal Coachella. After 2 days of nonstop madness, I was dead. But it was beyond worth it. It was easily the most insane festival I have ever been to. I had seen so many arrests and fights that I thought an actual riot would break out. There was a moment where I stared around at my surroundings and felt this incredible sense of belonging that only metal music can bring. I sincerely hope that Slipknot decides to take Knotfest back to California next year, and many years to come.