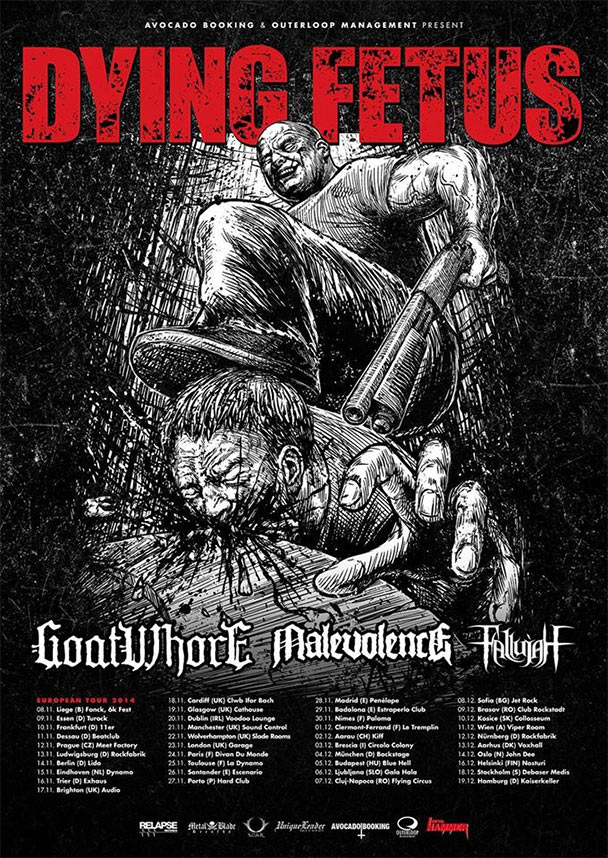 The sky boiled over and fires split, soaking the whole of Southern England with a deluge, the weight of which bordered on Biblical propensity. So, sodden and bedraggled I walked the curved path around the Highbury Garage, shoes squeaking, hoodie soaked and my visage as downcast as the weather.

However, all was not lost. I had boxed clever. Not only did I have a spare pair of socks in my bag but beneath the soggy exterior my insides were a seething caldera of restless excitement. Because tonight, Ladies and Gentlemen, I was to witness one of the finest Death metal shows to grace these sceptred isles in many a Solar Sojourn: Fallujah, Malevolence, Goatwhore and the mighty postulate that is (why not) Dying Fetus.

It was to a crowd of about one third capacity that Fallujah took the stage. A year has past since I was last lucky enough to see them play live and this time has obviously filled them with both confidence and performance knowledge as they flawlessly flowed through an annoyingly short (25mins) set. Their fashion forward brand of progressive Death metal, although slightly at odds with the rest of the bands on the bill, is warmly received by those present. Indeed many have turned up especially early to catch this band who appeal to the lucid dreams as much as the nightmares within the beast.

Their sound is clear and bright, the solos and samples ringing gorgeously clear through the chill of the inappropriately powerful air-conditioning. Each of Alex Hofmanns exhortations to action being warmly reciprocated and enthusiastic engaged in, with fist pumps and wirling hair prevelent throughout the crowd. Personally I could watch this band play all night every day of any week you care to mention, sadly though being first on any bill means your set must be curtailed artificially short in favour of the acts to come. So leaving us with a beautiful rendition of the first single taken from The Flesh Prevails, Sapphire, Fallujah take their leave, yielding to the night, but opening many a new heart in their wake.

Up next are Sheffield natives Malevolence, whose mere entrance is enough to motivate a sphincter puckering clearing to manifest in the centre of the room. This space being instantly occupied by a dozen or so checked shirted denizens of deep slam, who readied themselves with swirling arms and limbs flailed at obtuse angles as though desperate to prove that they were unflinchingly Up for beat Down.

The band themselves, all Baseball caps and braggadocio, launch themselves into their set. Initially surprising me with the up-tempo pace of their assault. Perhaps this was pandering a little to the Death Metal focus of the evening. This accelerated acclimation does not prevent a huge Circle Pit from twisting into existence, cyphering 30 or more people into its tumultuous form.

Eventually though the thunder turns to sludge and the band drop into several down tempo sections, which are greeted with the kind of aphasic arm flailing which belongs to the darker percussions of medieval torture. And despite several donkey kicks and other acts of associated stupidity, no one was hurt.

This good fortune is remarkable considering the brutal manipulation of tempo that Malevolence are capable of doling out. The viable connection they create between megalithic pacing and a simplicity of melody works hilariously well in a live setting. The corollary being that their music acts like an insanely devious form of brutal pop music; demanding that the audience mosh to the rhythm and slam to the pace.

Once again, minutes slip away, this time measured in spilt beer and bruised extremities and it is time for a splendidly silly dose of sigilic sacrifice. The hour for Goatwhore has drawn nigh.

As their name may suggest Goatwhores stock in trade is a sultry blend of of Black and Death metal, all fused together with pervasive theatrical atmospherics. They use every ounce of this dramatic flair to malform the crowd, from unique individuals to one giant multi-brained Black metal Claw.

Their Singer Ben Falgoust, 6'6” of molten madness, veers between beating his chest with sleeved avarice and delivering some of the greatest air guitar solos I have seen outside of a Finnish disco. All the while the rest of the band hammer home their unique Deathened Black metal vibe.

Goatwhore are one of my favourite live bands, managing to be both scintillating and diabolical simultaneously and tonight their power driven synthesis of excitement and brutality goes down a storm, in the midst of storm.

What was truly wonderful about this bill is how it managed to cover so many facets of the cultural miasma that is Death Metal with just 4 bands. Episodically the atmospheric, hardcore and delightfully ludicrous aspects of the genre had been celebrated and now to complete the quadrant of rapacious hate, brutality would have its hour and be borne aloft on a tide of pulchritude; It was time for Dying Fetus.

Boy, the crowd was ready for this, from the moment they launched into Homicidal Retribution the Garage exploded like a nitroglycerine fuelled frenzy of glorious catharsis. John Gallagher's tireless enthusiasm for riffs and growling imbuing the flagging crowd with a renewed sense of wanton spirit and destructive purpose. Previously recumbent security now pressed into earning their money as crowd surfers sprang fully formed from holes in the earth. Motivated by the fist pumping tightness that DF have made their stock in trade.

Crunchy and riff heavy, DF flayed the assembled masses for a serrated and visceral 70 minutes. Honing the evenings fun to a sharp and incisive point, which all the other bands had done their part in creating. But sadly, all good things must come to an end and sadly this is also true for metals favourite question, Indeed, this question is also, perversely its own response.

That if you were assembling a Death Metal line up, one designed to highlight the best and brightest corners of the whole genre and were searching for a band to crown that bill and after hours of pained discussion, when all other avenues had been exhausted, a quiet yet profound part of your mind would say: Why not Dying Fetus? And you'd never think of a reason.