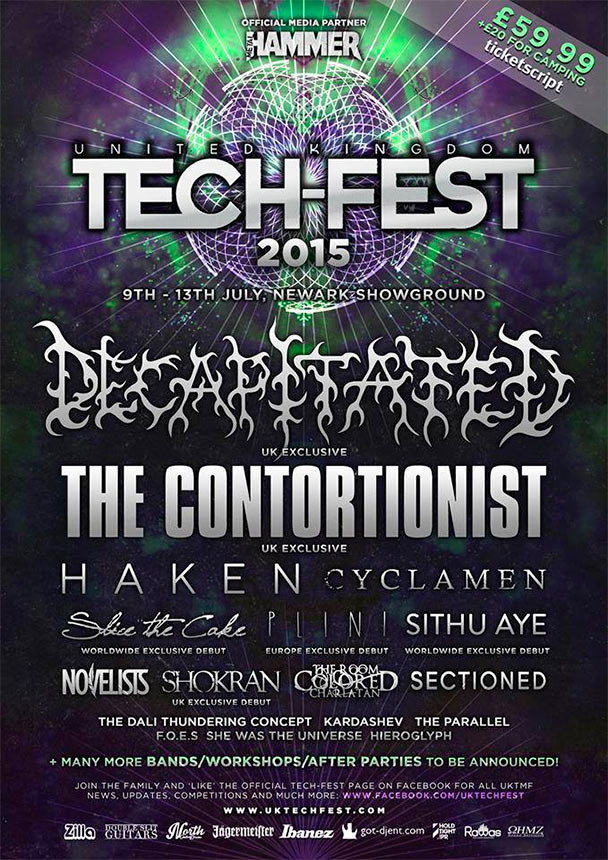 Its that time already folks. The first TechFest announcement has arrived. Without including any of previous years stalwarts, it shows the breadth of the progressive Tech Scene and showcases some of the most exciting heavy, melodic music in the whole world. Drink in the positive vibes and start dreaming, Newark gets closer with every day that passes.

Decapitated (UK Exclusive) – An exciting Headlining return to the UK for the Polish masters of pulsating Technical Death Metal.

The Contortionist (UK Exclusive) – Their 2014 album 'Language' redefined their sound and brought a whole new realm of fans for this Indiana quintet. Emotive and progressive, catch them at TechFest for their only UK festival performance.

Haken – Arguably the Kings of UK Prog-Rock, specialising in the most delightful extended flights of musical fantasy. Captivating and purposeful, their fluidly eclectic style is a perfect match for the symphonically positive vibe that is uniquely TechFest.

Cyclamen – This Japanese/American/Thailand/Welsh 5 piece have come a long way from their humble beginnings as Hayato Imanishi's University bedroom project to supporting Sikth on the Japanese leg of their reunion tour. Their storming set at the Leeds TF all dayer proved their power to command a crowds attention. A beguiling mixture of emotional death and sinuous Tech metal, The Cyclamen live show needs to be experienced to be believed.

Slice The Cake (Worldwide Exclusive Debut) – Another multi-national Progressive extravaganza of a band. This time making their World Wide Live debut are Slice The Cake. To make this show come together, The Circle Pit has Exclusive News that Conor Jobes (Nexilva) and Ollie Rooney (ex-Haarp Machine) will be filling in on guitar and bass respectively.

Plini (Europe Exclusive Début) and Sithu Aye (Worldwide Exclusive Début) – Are probably best mentioned together as they not only share equal levels of brilliance as solo composers but also shared a split EP last year. Their respective live Europe and world-wide débuts will be a minor dream come true for the rhapsodising TechFestians.

Novelists – More Power Prog, this time from France. Novelists music is as exciting as it is mysterious. Having seen them myself at this years Euroblast, I can honestly testify that this is a band not to miss.

Shokran (UK Exclusive Début) – From Parisian Prog to savagely acerbic Russian Tech. Their début album, Supreme Truth, was a big favourite around the TCP office and I for one will be very excited to experience them live.

The Room Colored Charlatan – Another Indianapolis based band, this Subliminal Groove alumni have a real epic metallic edge to their salacious Djenticular grooves. So forward thinking that they make me feel dumb and reactionary. Totes Excites!!

Sectioned – Edinburgh based hardcore sludge tech bastards. Shit loads of fun, if you like your fun bleak and soul destroying. One of my favourite UK bands.

The Dali Thundering Concept – Intelligent aggression seeps from every note of their 'Eyes Wide Opium' album. Our own Mattia had oceans of positive vibes for it when he reviewed it on its release. Another Parisian band, there must be something in the Seine, making all this progressive intent bubble to the surface.

Kardashev – Ok, for a Kardashev cocktail, mix equal parts Inferi and Fallujah add a dash of Abath, serve over the bleakest (yet altruisticly optimistic) ice cut from the permafrost in the Arctic tundra. Drink in Newark in July.

The Parallel – A Jacquard Loom of glorious hate, cursed by a nomadic Gypsy to only weave cloth depicting fractals. This quintet fuse brutality and technicality with a level of musicianship that can only be Canadian.

FOES – Eerie spectral grooves combined with a pulsating knack for luxurious bluesy choruses are what give Fall Of Every Sparrow their genre defying mystique. Defined by themselves not by trends a band to watch out for.

She Was The Universe – Self-proclaimed “8 string beard metal from Russia” S.W.T.U are a truly varied and exciting band, still in the adolescent stage of their development. Their debut album dropped in October and a mighty fine slice of progressive intent it is too.

Hieroglyph – They're from Leeds and London. They're lovely and make Riff heavy Tech metal that makes the most of a dual male/female vocal package. In fact, the female side of this partnership, Valentina Reptile contributed backing vocals and breathy atmosphere to the Skyharbor album, Guiding Lights.

Christmas is not yet with us, so plenty of time for Santa to lovingly thrust a ticket to Newark into your stocking.