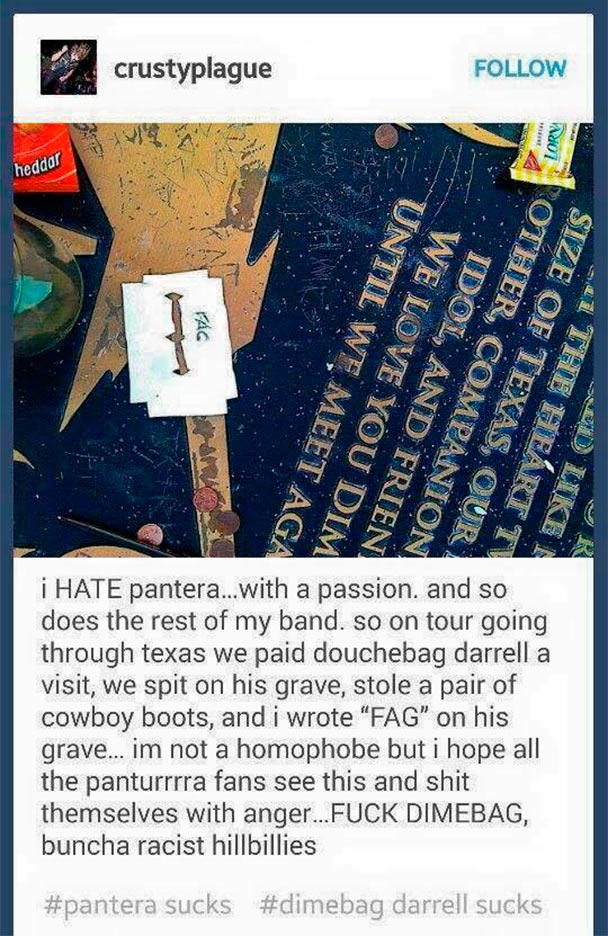 Some dipshits in a band called “Nuclear Hellfrost” (such a creative name) apparently aren’t huge Pantera fans. The members of this death/thrash/black metal band from Indiana thought that it would be funny if they disrespected the grave of one of the all time greats in metal; THEN post it onto social media. The since-deleted post (the Tumblr account has been deleted as well) showed a photo of what they did. You can view their photo/post above.

All it takes is a simple Google search of “crustyplague” to see that the account belongs to the vocalist of the band. I don’t care who you are, where you come from, or what music you do or don’t like, there are certain things you don’t do. What these fuckboys fail to understand is that their band probably wouldn’t even exist if it weren’t for Dimebag. Also, they have no moral high ground calling Pantera a “buncha racist hillbillies” considering they think using the word “fag” as an insult is acceptable. Dumbass, intolerant pricks.

Pantera’s Facebook page responded to this atrocious act with the following:

“We are absolutely disgusted by this! We ask that all of you please show Dime & his grave the respect he deserves. This conduct will not be tolerated and the authorities have been notified.”

Needless to say, a shitstorm has been ignited amongst Pantera fans (which is pretty much almost every metalhead). They have been posting to Nuclear Hellfrost’s Facebook page with a multitude of different threats. Personally, I hope someone beats the shit out of each one of them. Good luck trying to be a metal band now, fucking assholes.

They are currently trying to save face by saying it was a former member. I call bullshit.

The posts about us and to us are a complete surprise to us. Anything having to do with grave desecration was entirely a hoax put on by our former lead singer completely disconnected from the other members of the band. If you see Dimebag's grave you can see there is nothing carved into his grave, the only thing that exists is a photo of a piece of paper posted by the former member. We are strongly against any sort of homophobia, racism, or outright disrespect for a human being. We have nothing but the utmost respect for Dimebag and this is a misguided political publicity stunt that we were dragged into by a former member with an awful sense of humor. Nuclear Hellfrost as a band would like to apologize on this former member's behalf to not only Dimebag's fans, but most importantly his family. Again, the members of Nuclear Hellfrost had absolutely ZERO actual involvement in any of the alleged actions described by our former singer. Again, nothing but respect to Dimebag as a human being and condolences to his family. These are fabricated and contrived allegations on the internet that never happened in real life.