Lee McKinney (Born Of Osiris) – Artist Of The Week Interview

Fresh off the release of two signature guitars and his debut solo track, "Skylasher", Lee McKinney (Born Of Osiris) has been named our Artist of the Week!

In honor of this, I went to catch up with the shredder to talk about his multiple musical projects and, of course, Born of Osiris. Check out the interview down below along with "Skylasher" and his signature models.

MS – First and foremost, how the hell are you?

LM – I’m doing great! I’m actually in between studio sessions tracking guitar for the new Born of Osiris record. Currently 8 songs in. Who knows, I could be done by time this interview sees the public eye.

MS – That's awesome, dude. Anything more you want to say about the upcoming Born of Osiris album?

LM – Well it’s my favorite material to date! I think every record we find out who and what we are as a band more and more. Also it was a pleasure working with Nick Sampson more in depth this time. Last time we worked together we saw how talented he is and how hard of a worker he is. This time around I got to actually create ideas with him and hear his ideas for our music. He’s definitely on the same page. It felt as though we had a 6th member in our band for this one. I know we’ve done records with 6 members, but the general public doesn’t know how our writing process works. They are quick to point at coming and going 2nd guitar players as why albums sound a certain way, they are sorely mistaken.

MS – Looking forward to hearing more! You just released your first solo track “Skylasher” the other week. How are you feeling about that?

LM – I’m feeling great! The response is overwhelmingly positive. Releasing solo music is something I’ve wanted to do since I picked up the guitar at age 10. Some solo guitar records like “Ah Via Musicom” by Eric Johnson, “Perpetual Burn” by Jason Becker, “Surfing with the Alien” by Joe Satriani, “Passion and Warfare” by Steve Vai, all instilled in me at an early age that I wanted to do something along the same lines. I’d say the only negative comments people are saying is that it’s midi guitar… I don’t know how that would be the case, so in a way I’m flattered! I guess if I reamped Guitar Pro (which I am just now learning how to use) through my Axe-FX somehow that could be possible. Uh oh, now you got me thinking ;) I’m only kidding.

MS – Was there any particular motivation to branch out and start writing some one man band material at this point in your career?

LM – As I said, it’s something I’ve always wanted to do. I wrote Skylasher very naturally alongside and while writing the new Born of Osiris album. Right from the first riffs of the song I knew it wasn’t going to be Born of Osiris. I’m not sure I set out to write a solo song, but the second it started coming out I knew what it was to be.

MS – How’d it go writing music as a lone wolf as opposed to with the full band? Any ups or downs?

LM – Well to me it felt the same. Whenever I am off tour I am writing music in my studio every single day. I prepared this song the same way I would prepare and deliver a song for Born of Osiris. In Born of Osiris we agree that there can be “too many cooks in the kitchen,” and so for that reason we do the bulk skeleton work for things individually. We’ll come together in the end and make it a group effort, but all songs start off from somebody creating the big picture.

MS – Do you have any future plans for this solo project? Maybe an EP or an album?

LM – After I finish tracking this Born of Osiris record I’m going to dive right into the solo record. I couldn’t be more excited. As I go through my days wherever I am, I am always writing in my iPhone notepad whenever a random idea pops into my head. I can’t wait to dive in and make all of these wild and crazy ideas a reality. Skylasher has a metal approach, but that doesn’t mean the full length will be all metal songs. I can’t say since I haven’t created it quite yet, but at the moment I want the record to have a little of everything.

MS – You have an electronic project too, right?

LM – Yes! I make crazy party music as DIMIR. It’s a blast. I do it when I’m traveling and even off tour now sometimes in my studio. It started as a traveling/tour project as a way to write fun stuff when a guitar wasn’t around, as I said I don’t use Guitar Pro. The cool thing is that now that I get deeper and deeper into the production that goes into it, I’m fascinated. People write off electronic artists so fast, but it’s a very foolish decision. Everyone in the recording industry could learn from the talent it takes to get the most out of a proper electronic mix and master. That being said, there are a ton of DJ’s that have ghost writers/producers making music for them to play live, and of course I have no respect for that. I respect the talented producers that know how to write, mix, master, and most importantly create something that is FUN to listen to. I am no elitist metalhead. I think that's shallow.

MS – Right on. That's very true. And that’s all we have. Thanks for your time, man!

Check out Lee's debut single, "Skylasher", above and his signature Carvin Guitars down below. Happy shredding! 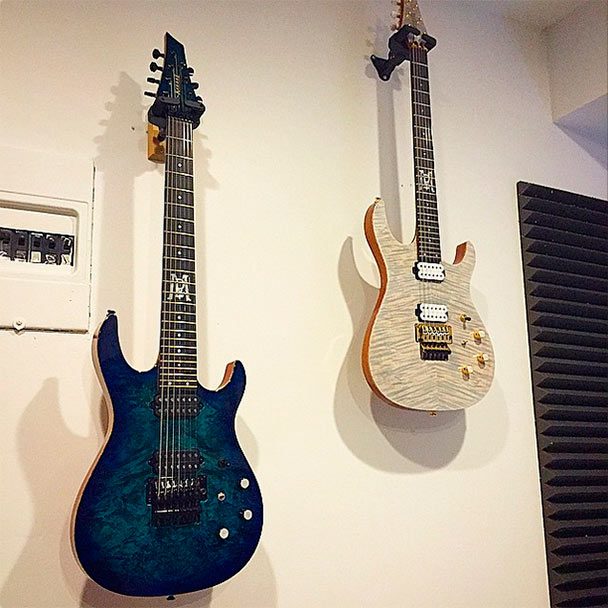