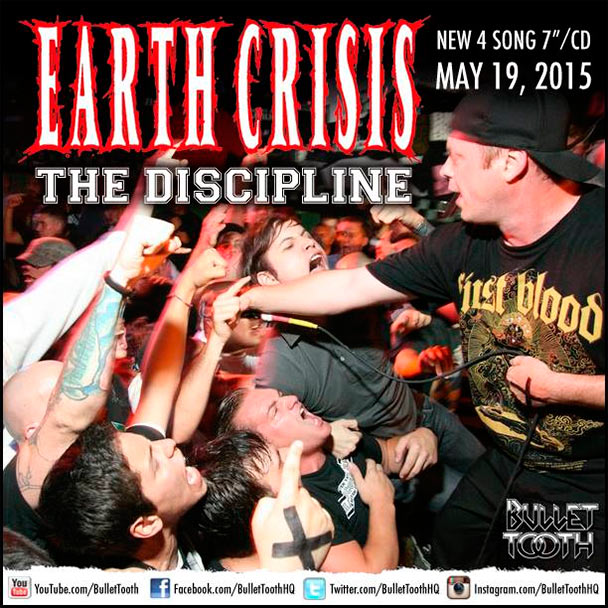 Earth Crisis have just announced a brand new, 4 song EP called "The Discipline". Read the official press release just below for all the gory details. There's plenty more where that came from.

Earth Crisis' chugging riffs and barked declarations served as the mouthpiece of America's vegan straight-edge movement throughout the '90s, detailing the ideas of animal and human liberation, drug-free living, and personal empowerment through hardcore music. The band is proud to announce a new 4 song 7" vinyl and CD release "The Discipline" coming May 19, 2015 on Bullet Tooth. The EP will have two newly recorded songs from the band's pioneering debut album "Destroy The Machines", and two unreleased songs die-hard fans may recognize from unreleased demos from the 90s.

Founding member, guitarist and song writer Scott Crouse, commented, "We think the songs on Destroy The Machines are still strong, and relevant, two decades later. We have always wanted to re-record them, and figured the 20 year anniversary of the album was a fitting occasion. Our intention isn't to erase the original versions, just offer another version we feel will offer the power and clarity the songs deserve. We also decided to record two songs we demo'd years ago because they're great and people need to hear them! "Behind The Mask" and "Time Of Strife" are timeless and we think ExC fans will love them."

There is some long history between Earth Crisis and Bullet Tooth founder Josh Grabelle. He met the band in 1992 when he moved to their hometown of Syracuse, NY to start college just as their very first 7" "All Out War" was released and the vegan straight edge hardcore movement had just begun. In the mid to late 1990s the band would play a few shows in his basement in Tinton Falls, New Jersey, were guests at each other's weddings, and have all remained friends for over twenty years.