Live Review – Mask of Judas, Valis Ablaze, Taken by the Tide and Fraktions 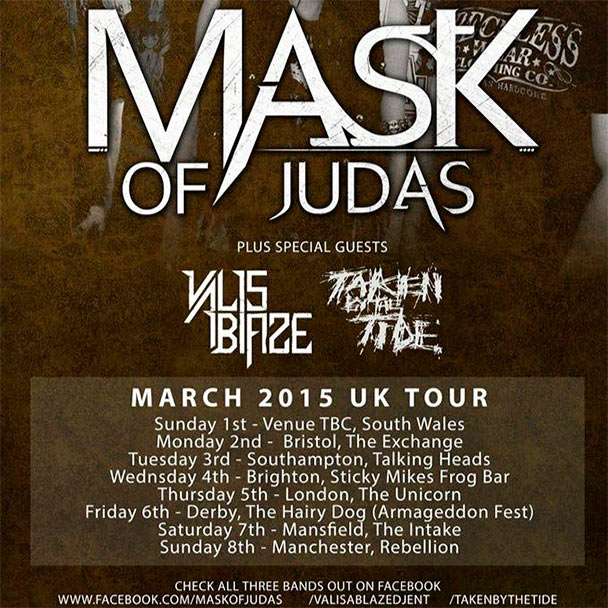 First band of the night is south London 5 piece Fraktions, who by their own admission are playing their first gig in a long time. This is somewhat evident from the slightly loose presentation of their songs. But there is a surreptitious bravery in the geeky charm that they let loose this evening which overwhelms any errors of timing or togetherness by virtue of this palpable honesty.

Frontman Joel Pinder lurches between microphone and keyboard with the enthusiasm of a man truly excited to be on stage. His vocal stylings are a slightly naïve blend of Michael Lessard and Nick Cave. An unusual combination for certain, and though he has neither the sweetness of the former nor the Crooned debasement of the latter, his untutored method is unique and cuts with clarion simplicity through the music.

As for the music, it takes qualities from a broad range of modern prog and tech metal which they manage to make work through their willingness to stray from rigidity and precision. As sometimes its by adhering to strict metres and decimal timings bands forget to be heavy.

At times they seem a little too reminiscent of Old Contortionist meets New Contortionist but if you are going to cook some tasty grooves there are much worse bases you could use as stock.
Youthful and exuberant, Fraktions are well worth checking out if you are a fan of progressive metal that can also kick you in the balls with its rhythmic power.

There is a delicious bleakness to the doom laden Mathcore that Taken By The Tide purvey. A gut wrenching low end provided by Andy Workman's 7 string bass, holds the attention of the body while the mind is assaulted by a jagged guitar driven melodic aggression.

Taking queues from Vildjharta's angular apathy and Neurosis' punkier moments, the show they put on is part entertainment part endurance test. A test that rewards anyone foolhardy enough to complete it with a bruised imagination and dented eardrums.

There is a slight looseness to their cohesion as a band, but not so significant that it distracts from the power of the overall effect. They have apparently been laying crowds to waste so far on this short tour and maybe have overdone the partying in the few days prior to this gig. So perhaps a couple of unfinished seams are understandable.

Their songs, deep and morose in the best way, are perhaps a little undercooked but there is a kernel of brilliance about TBTT, making them if not a band to adore at the moment then certainly one to put on your watch list.

There is a dichotomy at the heart of what makes Valis Ablaze such an effective live band. The mirror is set thus: Adam Leonard on vocals has a playful, almost clown-like exuberance. His dexterous and theatrical approach fulfils nearly all the clauses in the showmanship contract. And when this kind of pantomimic inclusiveness is coupled with their Nu-Metal drenched Tech muscularity, they become an irresistible proposal.

But far be it from me to suggest they are in any way a comedy band.

Valis play with a sinuous power which showcases their songs with a clarity and persuasive charm that many bigger bands would be covetous of.

Unlike the previous bands on tonight's bill, the 5 members of VA are not rooted to the spot and physically engage with their own riffs and rhythms. The substantial form of Ash Cook, nimbly shifts from rhythm to lead and back again all the while swaying in synch with the syncopated shapes of his strumming. Bassist Tom Moore – whose grooves are fluid and forcing, is on especially good form tonight. His corkscrew like technique underpinning some of the most easily appreciated songs in the whole Tech scene.

My last experience of Valis was at Techfest, where they only played with a single guitar. Tonight with a full compliment their sound has a raunchy rumble to it.
I have been pondering of late what VA need to do to project them to the next level of achievement. Tonight it struck me, to win more fans all they need do is convince people to see them play live. For their recorded material just doesn't capture the joyful simplicity and booty shaking momentum that they project from the lighted stage.

When I watch Mask of Judas I always seem to fall into a state of rhapsodic euphoria, so you will have to forgive me if I throw journalistic impartiality aside and just wax lyrical for a paragraph or two.
Tonight they are on sparkling form, treating the crowd to a mixture of old favourites and new songs.

As tight as the clenched fist of a vengeful assassin, they weld acres of progressive dexterity to a song-writing prescience so developed that it melts thoughts into feelings and cognitive ability into physical illiteracy.

Jo Challum's in ear monitors have failed and she informs the crowd that she will be guessing the notes but I can't recall a single moment when she is anything but precise. Her duo-stylistic voice fuses consolation and abrasion into a presence which shimmers with coruscation over a sinuous and detail oriented backdrop.

They generate a sound which pulses with energy, displaying both malevolence and a sense of haematic danger that I have not witnessed from them before. The drums fizz with a muscular determinism as the bass tone sways; lucid and facile through a haze of tessellated shred. Highly embellished yet straight to the point; the whole effect is redolent of a controlled explosion.

As I previously mentioned their new material seems much more focused and wilfully dynamic than their previous output. Moreover they play it with a gusto that suggests a justifiable pride. It certainly sparked flurries of synaptic expectation within me at the prospect of getting to hear the recorded versions.

Some shows feel like a nail being hit squarely on the head. This normally happens when a band wears their intentions in a relaxed and concentrated manner. When all connections are clean and they cease being passive avatars in the thrall of destiny, and become guardians of their own future. Tonight Mask of Judas wield the hammer.