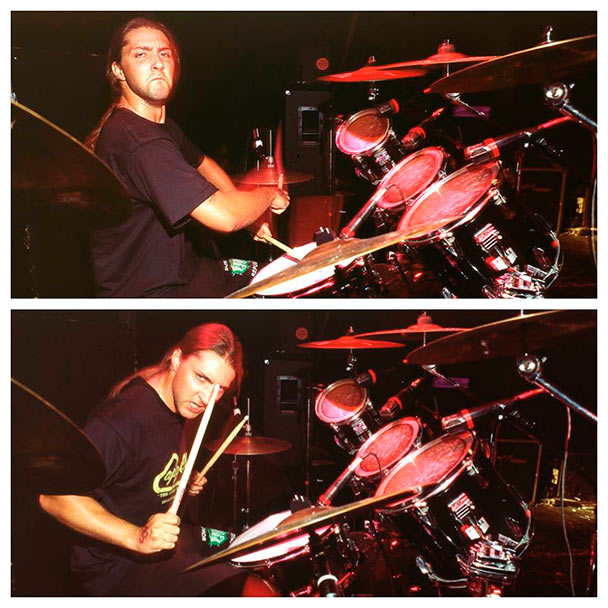 It's with great sadness that we bring this news. Broken Hope's co-founder and original drummer Ryan Stanek has passed away. He was only 42 years old.

Guitarist Jeremy Wagner weighed in with the following statement:

"I was stunned to hear of Ryan's passing and I'm still not believing it. Though Ryan and I didn't talk that often since he split from BH many years ago, we did correspond once in awhile, and we always wished each other well in whatever endeavors we were pursuing. Ryan was always an EXTREMELY talented man. When we first met, he was the BEST metal drummer within a 100-mile radius, and Joe Ptacek and I were fortunate to have this amazing drum-kid in our own backyard!

Ryan co-founded Broken Hope with Joe and me. We were the core…just the 3 of us, in the beginning, all in high school. Ryan also designed the very first Broken Hope logo, which was a "circular logo" we used on our first flyers and backdrop.

With all that, Ryan's artistic talents went BEYOND drums and drawing, he also played acoustic guitar incredibly well, wrote some of the segues on the earlier BH albums, contributed his own lyrical-parts on the "Swamped In Gore" album, and also, Ryan became a singer-songwriter post Broken Hope, in other bands he formed where he expressed his art his own way, and very well-done.

Ryan set the bar for death-metal drumming when we recorded, "Loathing." Specifically, the track, "Siamese Screams" is a song that measures any drummer's worth if he or she can play it to Ryan's original level.

If I have any regrets, it's that I didn't stay more connected with Ryan—especially after Joe's passing—but I'm HOPING he'd understand as many of us (like me) live in the illusion that we'll live forever and reconnect down the road later. Unfortuantely, Ryan left too early for me to hug him and hang with him again and catch up.

So, Ryan Stanek, I'm so very sorry to see you go—and Brian Griffin (ex-BH) also tells me personally that he wishes he could see you off, but he's in Australia right now. If you can hear my words here, please know that I'll NEVER forget YOU…you enriched and changed my life for the better, Broken Hope would never have existed without you, and most important: I'm extremely grateful to have known you, and to have known you as my "friend" when we were young men—and also, the last time we ever spoke.

If there's a heaven, I wish you travel well, Ryan…and I imagine you and Joe have met up and are having a blast. Much love."