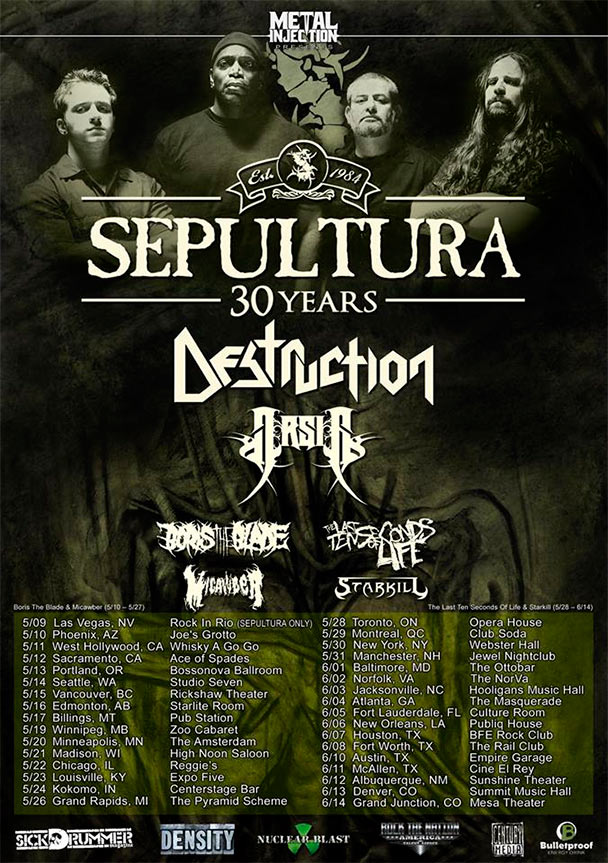 There's a massive tour set to leave North America in shambles. 3 decades of the legendary Sepultura is cause for celebration! They will be joined by no less than Destruction, Arsis, Boris The Blade, The Last Ten Seconds of Life, Micawber, and Starkill as direct support!

Celebrating their 30th year of existence, Brazil's most esteemed metal band Sepultura will be headlining a tour that includes German thrashers Destruction as direct support and American melodic tech-deathsters Arsis as openers. We can already sense the frenzy in mosh pits across the U.S. and Canada, too.

"It's going to be an amazing experience to celebrate a 30-year career with the strongest album we've ever made in our history," states Sepultura guitarist & songwriter Andreas Kisser about the upcoming 33-show trek and their latest album, The Mediator Between Head And Hands Must Be The Heart. "We are coming back to America and Canada with full force and with a hunger to destroy everything! Can't wait to perform the songs from the new album on stage! See you all on the road!"

The mayhem begins in Phoenix, Arizona on May 10th and ends on June 14th in Grand Junction, Colorado.