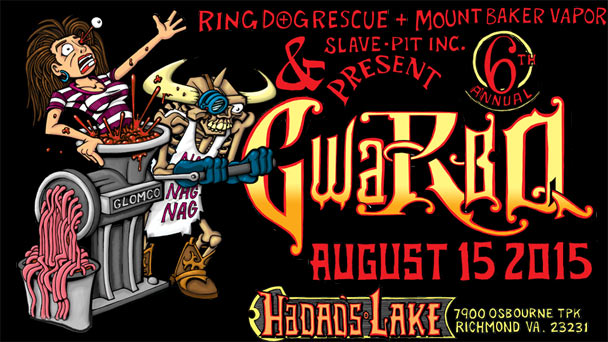 The 6th annual GWAR-B-Q has officially been announced. This will also be a celebration for 30 years of GWAR. They'll be joined by none other than Down, Descendents, and Goatwhore along with many more! Check the official statement below and prepare yourselves.

As the craziest event of the summer draws closer, more details are emerging about the GWAR-B-Q including the first round of bands confirmed to play the event! This year is an amazing milestone in GWAR's torrid history – 30 fucking years of death, destruction and rock and fucking roll! Such an occasion demands more than just a one-day party. The Scumdogs have set forth a slew of satellite events to be held across Richmond over the three-day weekend of August 14th through 16th. GWAR fans will be busier and more fulfilled than during any time in their miserable existence! And before you even ask…Hold your horses Bohabs, ticket prices and on-sale dates will be announced soon!

Legions of fanatical fans are expected to descend on Richmond to share in the celebration of 30 years of GWAR! The event's expansion to a full three day weekend includes the annual kick-off party, the B4BQ, swelling to two RVA venues, The National and The Broadberry, on Friday, August 14th. A new closing party, The Brutal Brunch, will be launched on Sunday, August 16th, giving destination fans an opportunity to check out the new GWARbar!

GWAR's punk, rock, and metal obsessed followers will celebrate the outrageous antics and memories of the band's 30 year history, and enjoy a musical lineup like no other, complete with a rare and highly anticipated performance from the Descendents, Down, and The Dickies on three stages of devastation alongside breakthrough artists like Goatwhore, MC Chris and Dead Earth Politics, as well as hometown favorites, RPG to name a few, plus MANY MORE exciting artists to be announced soon.

Bohabs can receive discounts on weekend lodging through GWAR's partner hotels in Richmond. Information can be found at www.gwarbq.com. As always, part of the proceeds of the GWAR-B-Q go to Ring Dog Rescue, a non-profit organization dedicated to the safety and preservation of the "Pit Bull type dogs."

This is a birthday party Bohabs cannot miss… GWAR COMMANDS IT!