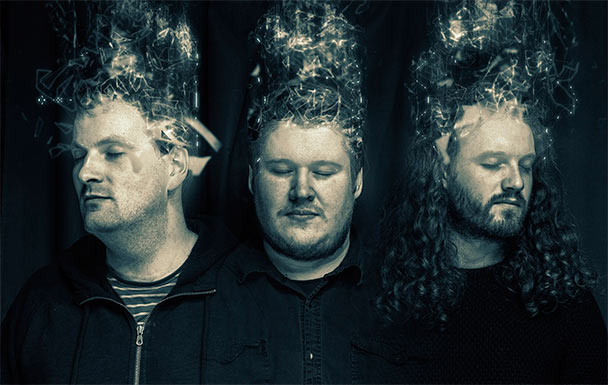 Progressive trio Heights featuring drummer Jamie Postones of TesseracT, have released a live promo video for their track 'Centrifuge'. The video, which premiered on Prog Magazine, was shot by Small Pond Recordings. View the video HERE or down below.

The track appears on the trio’s third album, Phantasia On The High Processions Of Sun, Moon And Countless Stars Above, which is released on April 27 via Basick Records.

Guitarist Al Heslop comments: “Centrifuge has a cyclic riff that re-occurs in various forms. It was partially inspired by Stanley Kubrick's masterpiece 2001: A Space Odyssey – it features a space station with a centrifugal design that simulates gravity, shot to mind-bending effect.

As their third record to date, ‘Phantasia On The High Processions Of Sun, Moon And Countless Stars Above’ is their most adventurous effort yet. Combining elements of prog rock, post rock, jazz and classical composition, HEIGHTS weave intricate nuances through textured soundscapes with a wonderful air of simplicity. Guitarist Al Heslop’s grand compositional vision, Bassist John Hopkins’ finesse and Jamie’s natural groove become a luscious flow of sound that is both beautiful and deeply detailed.

Phantasia On The High Processions Of Sun, Moon And Countless Stars Above is released by Basick Records on April 27th and is available to pre-order now. Catch the band live at The Hope in Brighton on Saturday April 4th. Tickets available HERE.