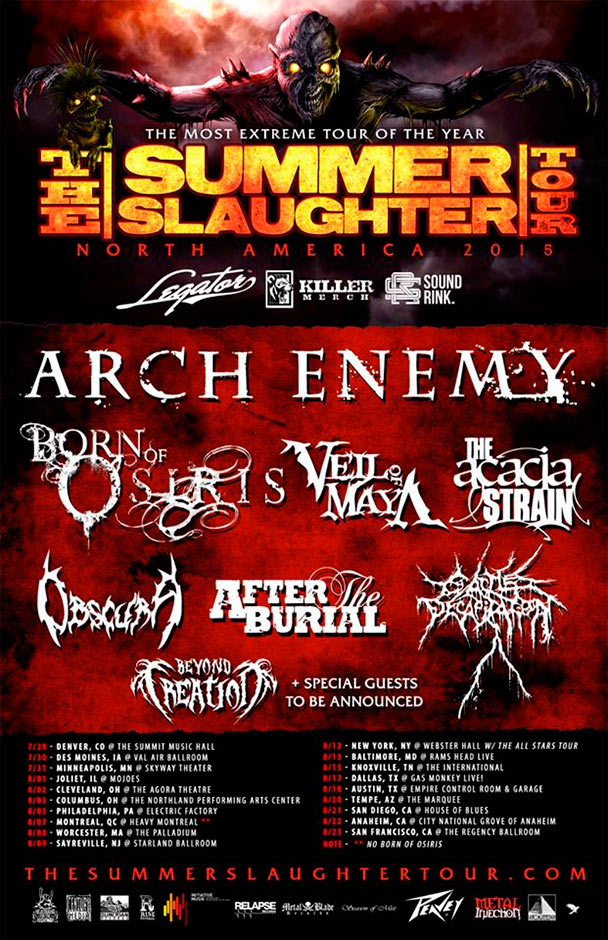 It’s official! The Summer Slaughter 2015 lineup has been announced and it pretty much follows the predictions to a T! It’s looking to be a good year striking a balance between the tour’s signature extreme metal with acts such as Cattle Decapitation, Obscura, and Beyond Creation and some slightly more accessible names like Arch Enemy, Born of Osiris, and Veil of Maya. After The Burial will also be there, making for the Sumerian Records “big three”. And, of course, The Acacia Strain will also be crushing skulls. The annual special guest has yet to be announced.

All in all, this lineup provides some contrast from last year’s aural assault which was almost exclusively an extreme metal bash (LOOK HERE). Ultimately, this may draw larger crowds as I’m guessing a fair few people are shitting their pants right now.

You can check the dates and re-check the lineup on the flyer provided up above. You can also find music from all the bands down below. Tickets will go on sale next week on Friday, May 29 @ 10AM PST / 1PM EST. Be on the lookout for more!