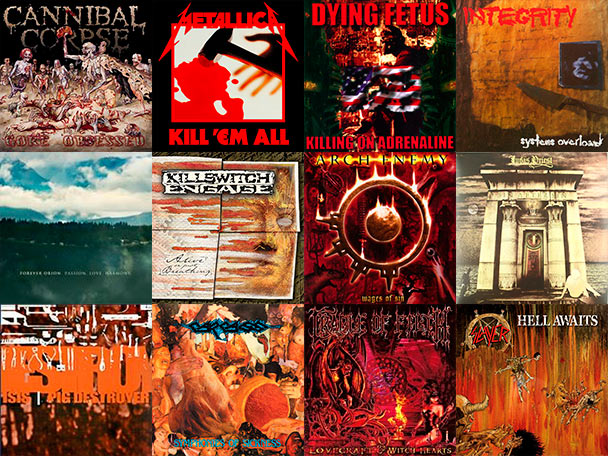 Near the end of 2013 I began a new segment titled “Heavy Covers” in which I discussed covers of classic heavy metal and hardcore songs. Seeing as how it’s been over a year since the last one was written, this feels like as good a time as any to revisit the segment. So here we go, six more cover songs that you’ll either love or hate!

I was actually blown away by how cool this cover sounded. I never imagined Cannibal Corpse covering a “Kill Em’ All” era Metallica song, and I definitely never thought they would be able to make that cover almost as good as the original. But it totally works! There are two things in particular that I love about C.C.’s cover of “No Remorse”. First, they’re able to take the breakdowns in the original and make them sludgier, which helps to add a death metal edge to the rhythm without seeming forced or out of place. Second, I love how when they get into the chorus it turns into a melodic death metal song, very much in the style of the whole Gothenburg lot. In fact, it’s probably the most melodic these brutal death metalers have ever gotten. Hell, even the solos were successfully converted into heavy, atonal awesomeness! This one is definitely worth a listen.

Covering this classic metalcore jam takes balls. Not because it’s technically difficult, but rather because “true” hxc bros are going to fling there verbal shit toward whoever attempts to do so. It’s a good thing Dying Fetus doesn’t give a damn because their cover of Integrity’s “Judgment Day” is a nice rendition. The addition of guttural vocals and that blast beat section fits so smoothly into the structure of the original. Plus it never hurts to use that awesome 90’s death metal guitar tone when covering older songs, especially if the intent is to make the cover sound as brutal as possible. This song could almost be viewed as the proto-type to the deathcore genre. Regardless of what anyone’s elitist pride allows them to believe, Dying Fetus were technically one of the first death metal bands to incorporate vast hardcore/metalcore influences into their sound. This cover is just one of the many examples. Check it out!

This cover has somewhat of a yin/yang effect. On one end, the execution is solid, the melody captures roughly the same aura of emotion, and they even manage to add a little more atmosphere into the chorus, which is a nice touch. On the other end, the vocal delivery doesn’t seem to mesh well with the instrumentation, plus the auto-tune is fairly annoying. But hey, at least they didn’t turn it into a fucking djent song. By cover song standards, Forever Orion did a pretty good job with this one. I also find it interesting that Killswitch Engage songs are already being covered. Maybe the metal community is finally beginning to realize that KSE is a great band! Give this cover a listen, and if time permits check out their guitarist’s other band, Elitist. They’re pretty awesome.

I really don’t understand all the hate that Cradle of Filth gets, because just about everything I’ve heard by them sounds pretty sweet. Maybe I’m not kvlt enough. With that said, even the band’s detractors have to admit that their cover of “Hell Awaits” is amazing! The thing that makes a cover great is the ability of a band to put their own sound into the cover without completely sacrificing the quality and feel of the original. With “Hell Awaits”, Cradle of Filth kept the thrash riffs as aggressive and pounding as ever, while the drumming held that same speed and intensity that’s associated with Slayer’s music. Those traits alone would’ve made this a good cover, but the band also successfully put their own experimental black/gothic metal style into the song. The raspy, shrieked vocals are absolutely menacing and meld perfectly with the instrumentation and lyrical content. Perhaps the coolest addition though is the use of keyboards. Mr. Gregori’s use of the instrument to create a spooky, nightmarish atmosphere served as the perfect backdrop for the song’s sonic assault. This one’s an absolute listen!

I always find these types of covers to be the most interesting. Hearing a modern band in a particular sub-genre cover a song by one of the founding bands of that sub-genre allows the listener to interpret how the style has evolved over the years. So does Pig Destroyer’s cover of Carcass’s classic “Exhume to Consume” highlight anything about the evolution of grindcore? Well not necessarily, but it’s still an awesome cover! Instrumentally, Pig Destroyer stayed very true to the original, but enhanced production has greatly assisted in making the classic tune less of a clusterfuck of noise. I was blown away by the drumming in this cover. You could actually hear how intricate the fills are and how fast the double bass is played. Overall, this cover feels… dare I say… heavier than the original? Yeah it’s a lot heavier. This just proves that higher production values can totally benefit extreme music. Check it out if you like the grind!

“this is just terrible… sound like vomit” – Joyless Dick

Is there really any right or wrong way to do a cover? The short answer is no. That’s exactly why I love Arch Enemy’s version of “Starbreaker”. While some bands try their best to replicate the sound of the original, other bands are like “Yeah Judas Priest! Let’s drink, bump up the bpm and fucking shred!” Arch Enemy seemed to have had the latter approach when they took the classic Priest jam and completely made it their own. The death growls and thrash metal riffing alone almost make this unrecognizable from the original. I also love how Mr. Amott totally re-wrote the solo to better fit his neo-classical style. Sort of like when The Dillinger Escape Plan covered “Paranoid”, this cover is all about reinterpreting the classic tune through an extreme metal paradigm, and it works! Seriously, if you’re not feeling that double bass during the outro then you might need to visit your doctor. So if you’re one of those rare metal heads that has a sense of humor or doesn’t take his/her genre of preference too seriously then check this one out.