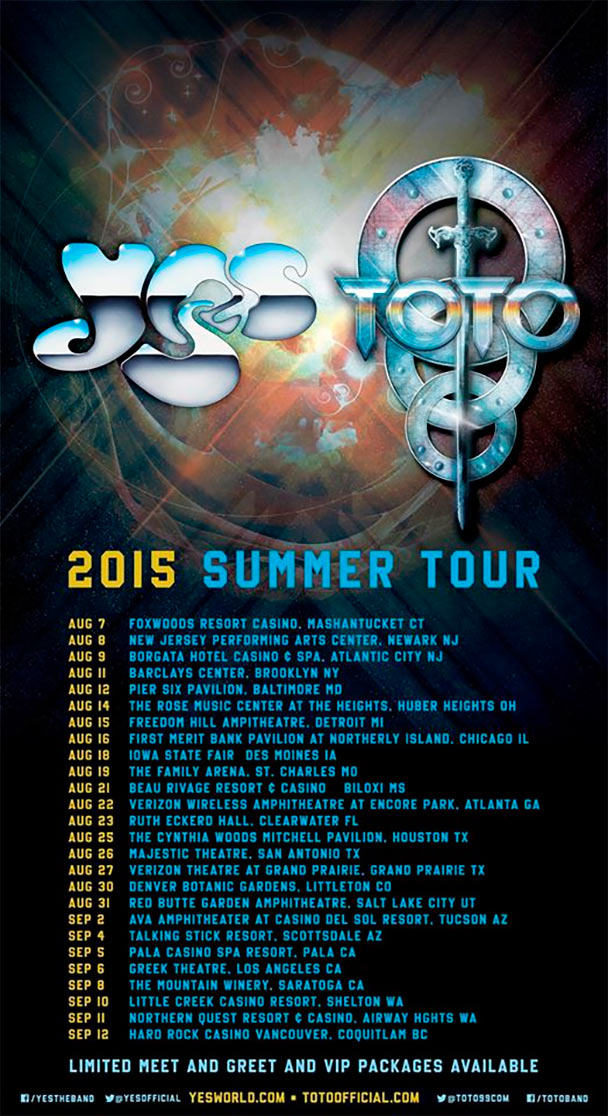 Okay, this isn’t metal. But it is awesome. And we figured some of you classic rock / prog heads may very well be interested. Yes and Toto will soon be joining forces for a North American tour! This will begin in August and end up in September. You can read over the official press release below and see all the dates on the flyer above. And, of course, we’ve included music.

World-renowned recording artists YES and Toto today announced they will join forces this summer for a co-headlining North American tour.

Among the world’s most influential, ground-breaking, and respected progressive rock bands, Grammy Award winning YES has sold nearly 40 million albums in a career that has so far spanned more than four decades. YES continues with its tradition of symphonic progressive rock that remains timelessly fresh and innovative.

Since its founding in 1968, YES has created much of rock history’s most important music, including iconic pieces like ‘Roundabout,’ ‘Close to the Edge,’ ‘I’ve Seen All Good People,’ “Owner of a Lonely Heart,’ ‘Starship Trooper,’ and countless others.

Their albums, including ‘Fragile,’ ‘Close to the Edge,’ ‘Tales from Topographic Oceans,’ and ‘90125,’ have been certified multi-platinum, double-platinum, platinum, and more by the RIAA. YES continues to inspire millions of musicians, fans, and music lovers around the world.

“We’re thrilled to be hitting the road with Toto. Yes have always been big fans of Toto’s music, and we think the fans are going to really enjoy seeing both of us together” says YES co-founder and bassist, Chris Squire.

YES will be releasing a new live CD/DVD (recorded at the Mesa Arts Center in Mesa, Arizona) entitled Like It Is on July 7th.

Few ensembles in the history of recorded music have individually or collectively had a larger imprint on pop culture than the members of Toto. As individuals, the band members can be heard on an astonishing 5000 albums that together amass a sales history of a half a billion albums. Amongst these recordings, NARAS applauded the performances with more than 200 Grammy nominations.

With over 35 years together and thousands of credits and accolades to their names, Toto remains one of the top selling touring and recording acts in the world. They recently released their first new studio album in ten years – TOTO XIV which debuted last week Top 10 in nine countries around the world. Prior to the tour with YES, Toto are embarking on a European headline arena tour with appearances at key festivals.

“We are so honored to be touring with our musical hero’s YES,” remarked founder/guitarist Steve Lukather. “Life changing music for me and the guys and we even have a song on our new record totally inspired by them so it is a lifelong love of their music that has kept us fans to this day. We all stood and waited in line for tix to see Close to the Edge and Topographic.. many many shows as young upcoming musicians/fans in the 70’s and were blown away and inspired to be better musicians and composers by Yes’ amazing music, musicianship and insanely cool live shows. This is a crazy dream come true for us and we can’t wait to do this tour and to make new friends and solidify old friendships.”