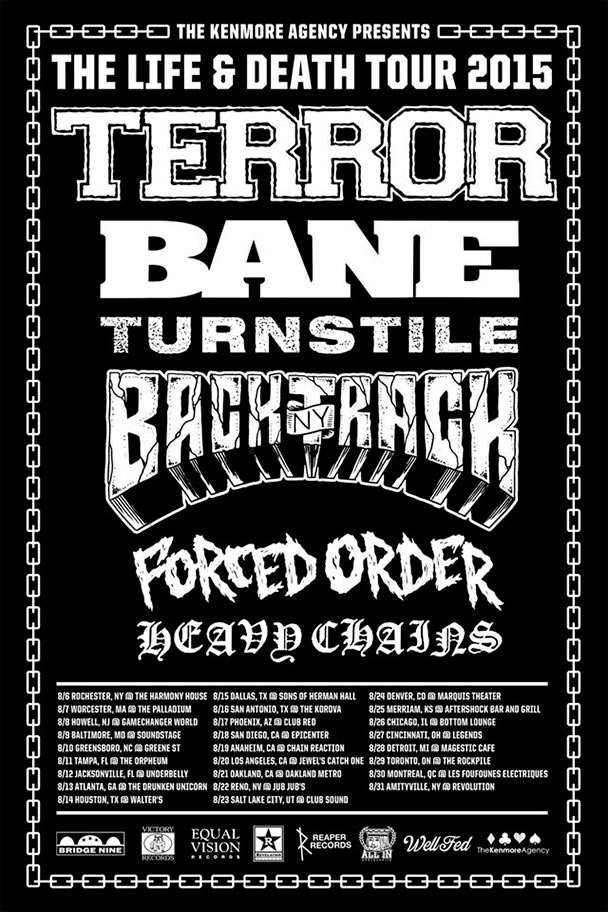 North America! Possibly the best Hardcore tour of the entire year is about to be heading your way! Presenting The Life & Death Tour 2015. The entirety of August will be left in shambles after this tour package wrecks the continent. None other than Terror will be leading the charge with direct support from Bane, Turnstile, Backtrack, Forced Order, and Heavy Chains! Check the official press release along with music from all the bands down below and scope the dates on the flyer up above. We’ll see you in the pit.

Terror are wrapping up their current run with The Story So Far and Four Year Strong this week in California, but have just announced another full US tour in August.  Headlined by Terror, “The Life & Death Tour 2015” will also feature Bane, Turnstile, Backtrack, Forced Order and Heavy Chains.

Terror will release their highly-anticipated seventh full length album, The 25th Hour, on Friday, August 7th. Pre-order packages for The 25th Hour will be announced very soon.  Listen to “The Solution” from The 25th Hour on Noisey.  Terrorizer Magazine exclaims, “There are no fakes, no fronts, no bullshit; this is TERROR at their very best.  This is hardcore.”