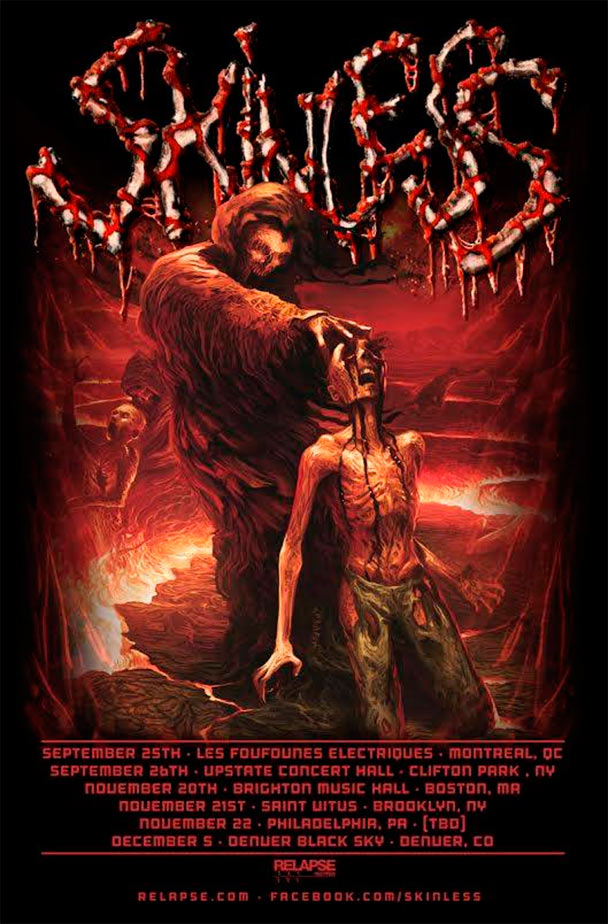 For those who haven’t heard, the recently reformed Skinless just released their first album in 8 years! This was known as “Only The Ruthless Remain” which came out just last month. You can listen to the entire Death Metal experience through the link found just below:

In addition to this great extreme metal news, Skinless will be moving forward on the live front as well. They just announced a series of shows that will wrap up the Skinless experience of 2015. You can see them on the flyer up above and the press release down below. And, of course, we’ve included some music \m/

Reactivated New York death metal unit, Skinless, will level stages this Fall on a medley of live takeovers. The onstage debauchery includes performances in Montreal, Clifton Park, Boston, Brooklyn and Philadelphia as well as a co-headlining stint with Pig Destroyer on this year’s edition of Denver Black Sky in December. Additional onstage infiltrations are currently in their plotting stages.

Comments the band: “We’re stoked to have the opportunity to shred in some of our favorite cities! Time is tight for the good ol’ boys in Skinless but when the stars align, you can expect and old school night of extreme brutality. Very much looking forward to it; see ya soon.”

They also commented on Facebook: “Ok guys, here it is. These are the shows we’ll play for the remainder of 2015. This is the first time we’ll ever play Boston. It’s also been a long ass time since we’ve been to NYC, Philly, Montreal.”