Why Does UK Tech Fest Inspire Such Loyalty and Dedication? 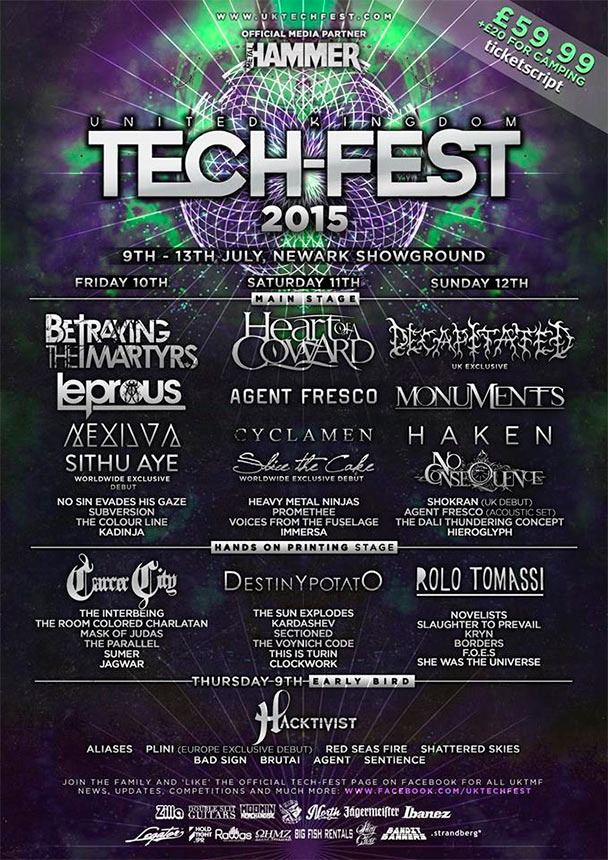 As the collective excitement for the 4th edition of the UK Tech-Metal-Fest climbs ever higher, I’ve decided to take 5 minutes alone in air conditioned room to analyse what it is about this particular event, that inspires such loyalty and dedication among its attendees.

The first consideration would be the cost. The level at which they are set is significantly on the cheap side of reasonable. £80 for 4 days of music, with after-parties, workshops and camping included, is generous to the point of charitable.

Others may suggest that festivals are priced according to size. However, in my experience the number of bands that one can see at a festival is inversely proportional to the size of said festival. This is determined by time clashes/distances between stages/general confusion and the number of idiots who can block ones path at anyone moment; these are generally not an issue at Tech-Fest. So perfectly appointed is it in its current location, that you can watch every single band.

Secondly, the line-up, while fairly restrained in number, more than makes up for that in quality. Progressive Metal is perhaps the fastest growing scene within the metal community. This growth seems to be driven by the willingness of its adherents to allow increasingly varied elements to both influence and fuel the music. Indeed, one of the most popular acts at the 3rd TechFest was Acoustic Vibe Machine Jon Gomm, whom I venture, would be the unfortunate recipient of drunkenly hurled missiles at other Metal Fests. The response to his set at Tech Fest was a demure combination of slack jawed adulation and semi-ironic crowd surfing.

The organisers also know their target audience presciently and while they do have strictures about bands not playing repeat years without new material, they are not slavishly adhered to. The consequence of which is TechFestians are not let down or disappointed with the line-up and are kept fully in the loop regarding any changes and/or drop-outs.

It is this notion of community communication that bonds festival to crowd and crowd to festival in a unique and indelible manner. Brand loyalty is apparently waning across the world of responsive marketing; but again Tech-Fest provides telling counterpoint to this trend; as it is marketed by its followers like no other event. Who all seemingly want to share the joie de vie inspired by attending with more people every year.

It is this joy, this collective and self-perpetuating bonhomie which is the subject of my 4th and final point.

With my abiding memories of Glastonbury and Bloodstock limited to being repeatedly pissed on and savaged by the ill-controlled feet of errant crowd-surfers. Attending a festival where a collective sense of purpose is innate rather than painted on, is more than a breath of fresh air. So strong is the unifying spirit, that just by describing it one rapidly descends into the cliché pit.

But I am serious and unflinching when I say that there are no strangers at TechFest, only friends you have yet to make. But this does not imply that those attending are a staid and insipid bunch. Indeed some of the most creative, vibrant and spontaneous people I have ever met are regulars.

But, to coin a phrase, the abundant happiness at Tech-Fest is derived from knowing that virtually everyone in attendance was born on same side of Shit Mountain as yourself. While they may not share your opinion universally, they can appreciate your perspective. They are empathetic, kind, understanding, searingly funny, sarcastic as fuck, and while also capable of acts of the most eye-opening stupidity they are filled with a decency and respect that is sadly lacking in the wider world.

I told you avoiding clichés was impossible.