Straight from the valley of crucifixion (aka Oklahoma City) comes Broken Flesh. This metal unit produces a wave of high quality Brutal Death Metal with which to pummel your ears and lift your soul. They’ve done so quite effectively, producing a number of heavy releases for the better part of a decade. But you’ll really want to keep your eyes on what comes next…

Right now, Broken Flesh are preparing to release their self-titled album. This will strike on September 4th through the awesome Luxor Records. Pre-Orders are now available RIGHT HERE. In support of this effort, they’ve come forward to release a brand new single “Hell” right here on The Circle Pit! Have yourself a good listen down below and beware the impending brutality \m/

Brutal Christian Death Metal may seem like a rare concept but it’s quite plausible in reality. And that’s precisely what we’ve brought today. Extreme metal and the faith have collided several times before. Take Impending Doom, Mortification and As They Sleep, for example. You can even look at this recent 8-Way Christian Grindcore Split.

If you’d like to know more, here’s some background and further information on the band:

As a ministry Broken Flesh’s first and foremost priority is to expand the kingdom of almighty God through His one and only Son, Yeshuah (Christ Jesus). As a band, their foremost priority is to accomplish the first statement aided by creating the most crushing and offensive forms of brutal death metal that they have the ability to conceive.

The band saw their debut release, Forever In Flames, released in 2009 before releasing their sophomore album, Stripped, Stabbed, and Crucified, three years later. The very next year they released Warbound before it was reissued January 27th on Luxor Records. 2015 will bring about the release of what will be the most crushing music the band has ever made to date. The album will be the band’s first proper release on Luxor Records (As They Sleep, It Lies Within, and others). Featuring on the album will be ten brand new face crushing songs and two rerecorded tracks produced by As They Sleep’s Nick Morris. 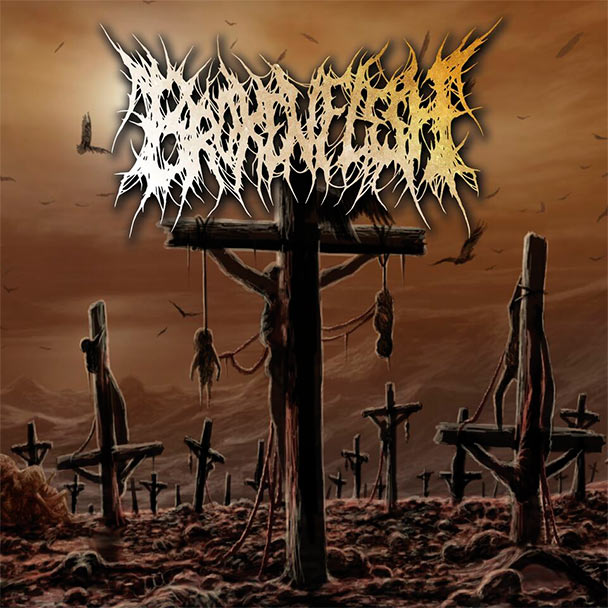