Between The Buried And Me, Enslaved, Intronaut, Native Construct Tour 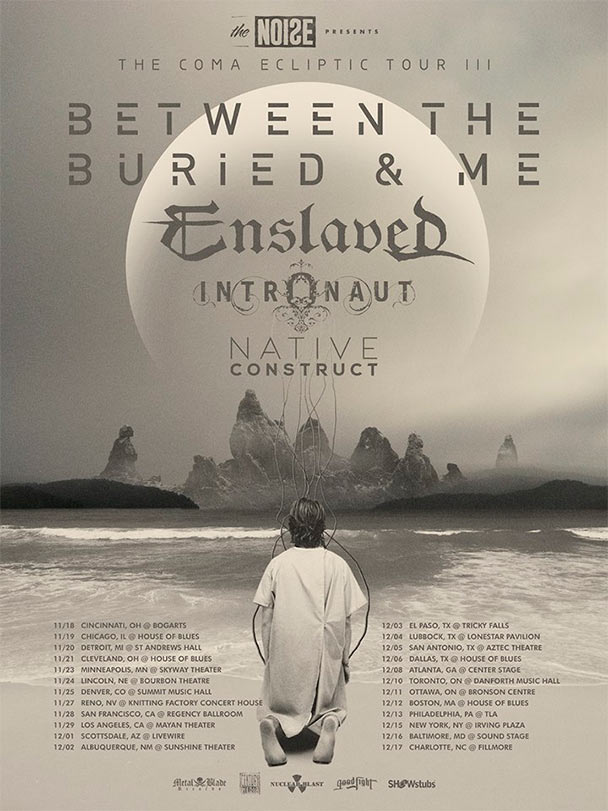 Unless you’re living under a prog rock, you might want to come out and see this tour. Between The Buried and Me will be leading a most excellent venture across North America starting this fall. They will be accompanied by no less than Enslaved, Intronaut, and Native Construct. The level of talent on this tour is too damn high! Check the official statements and music down below. Dates are on the flyer above.

Between the Buried and Me will return to the road this fall to headline North America. The Noise Presents: Between the Buried and Me Coma Ecliptic Tour III will feature support from Norwegian metal legends Enslaved, plus progressive masters Intronaut, and prog newcomers Native Construct. The tour’s line up promises one of the most powerful concert experiences of the fall.

Between the Buried and Me’s Dan Briggs comments: “This is a package that we handpicked each band, which doesn’t always happen. It shows off the diversity of the progressive music universe and we couldn’t be more excited to have a young band like Native Construct, Intronaut who are great friends of ours already, and the legends in Enslaved, along with us.”

Ivar from Enslaved offered the following statement: “When we ended our highly successful tour just this March, it was with an outspoken “we sure hope there’s another trip across the pond already this year”. And wouldn’t you know it; there IS going to be just that! The gods heard our call. OR; it could have been the booking agents and Between the Buried and Me – this tour coming up from November 18th 2015 will see us supporting them on a trek throughout USA for the following month. We will add our extreme flavour to the prog-metal package; to make sure our own faithful American fans (which we will never be able to thank enough for their relentless support), as well as the new listeners we’ll meet on the way gets the full-blown Enslaved-experience!”