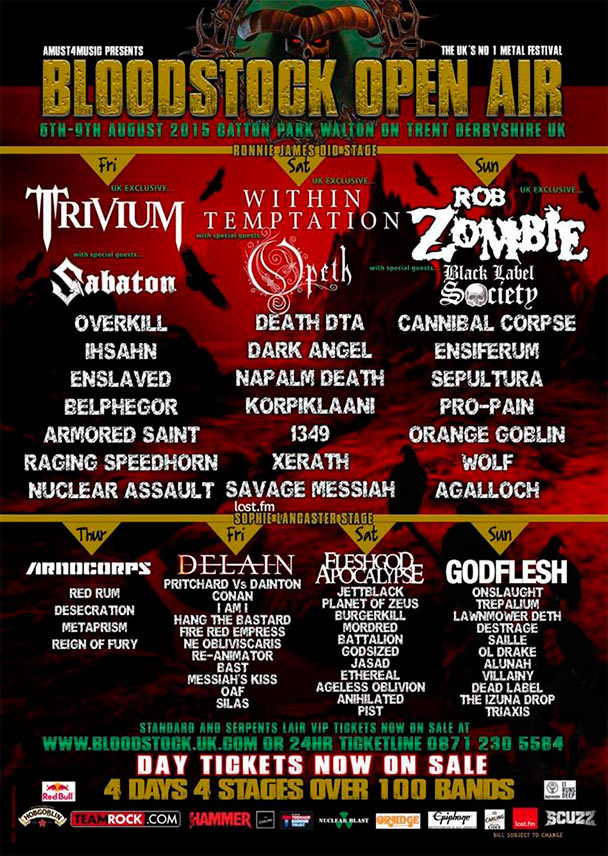 It’s that time of year again. That time when a few people dust off their so called “battle jackets”, consume an insane amount of warm alcohol, and sweat their bollocks off, in a field nestled somewhere in between Birmingham and Derby. By this, of course, I mean Bloodstock, but you already knew that.

For me personally, the 2015 edition would be yours truly breaking his cherry so to speak, so I didn’t know what to expect. Perhaps a scaled down version of Download? Initially I thought this, but that statement turned out to be another level of wrong, and needless to say, I was very happy about that. Let’s face it, Download has become a huge, money making dreadnaught whereby you have to walk to the fair corners of the universe, just for a £250 pound bag of crisps. Anyway, enough about that.
Bloodstock is a place of extremely chilled vibes, and an ethos about the music. If all festivals were like this, then the world would be a lot better place for it. Who’d of thought someone would say that about a metal festival? Whoa, didn’t mean to sidetrack there folks, lets crack on shall we?

Arriving at Catton some point around one in the afternoon, the sun was already making it’s overbearing presence felt, may as well of called it Sweatstock. I have never experienced a festival this hot in all my life, and after queing for nearly 2 hours just to get in, the possibility of heatstroke was all too real; I don’t deal with the heat all too well. After oversleeping, a supermarket run, and a whole lot of other logistical nightmares, a couple of bands had already played by the time everything was sorted and taken care of.

Self proclaimed “Welsh death metal bastards” DESECRATION were heavy enough, but for some reason, the sound was like an amorpheus blob of noise, brutality and an uncomfortable amount of bass, which you can’t exactly fault the band for. They themselves ploughed through regardless, and to be fair, were highly entertaining in the process and were a more than ample punch to the face to get me started.

Of course at a festival such as this, you have to have a token pirate band. That’s where RED RUM came in. With the alcohol freely flowing, the crowd packed like sardines, and sound issues rearing its ugly head yet again, the midland’s equivalent to Alestorm were exactly as you’d expect them to be (insert a plethora of pirate related analogies here). I jest, Red Rum brought fun times, and were a perfect fit for all round atmosphere of Bloodstock at that exact time and space.

By the time ARNOCORPS hit the Sophie stage, a lot of people were already on their way to a drunken oblivion (me included), so I’ll sum up the set like this: Imagine John Matrix, Douglas Quaid and the butcher of Bakersfield himself, Ben Richards, started a band to destroy people in the pit, instead of countless henchmen with an arsenal to put a giant coup to shame. For those of you who don’t get the references, Arnocorps are an Arnold Swartzenegger themed hardcore band, imagine the hilarity that ensued…

After a night of heavy drinking, and bin joust spectation (I could honestly write a whole article on that alone) I managed to drag my broken carcass in the arena for band numero uno on the Ronnie James Dio stage. A cult thrash band by the name of NUCLEAR ASSAULT. Let’s be honest though if you were there, I think we can agree that the singer looked like he’d be more at home at Butlins with the kids, instead of opening a metal festival. Seriously though, the dude can wail, he was on point throughout the whole set. Shame the rest of the performance was a bit hit and miss, do you know how something lacks sometimes when you see a band, but you can’t quite put your finger on what? Nuclear Assault were the embodiment of that.

Way back at the turn of the century, the next band were one of my go to bands of the era. RAGING SPEEDHORN were every bit the tour de force I remember from way back when, if slightly drawn out in places. Those riffs though, they’ve always been the bands ace in the hole, and on that day, they brought them hard and heavy. Personally, I’m so glad they decided to make a comeback.

A lot of people were telling me that you have to go see KING LEVIATHAN tear up the New Blood stage, and it’s safe to say, they didn’t disappoint. Adorned with battle paint, the Brighton band were an unstoppable juggernaught, that absolutely lived up to everyone’s hype. Maybe it was the fact that it was in a tent, but I thought there was a lot more atmosphere than the previous bands I’d witnessed, the fact that the tent was rammed may of also contributed to that…

The urge for a meal was running strong by this point (I say meal, more like 2 bags of crisps and a tin of cold beans, festival dining aye?) after which, BELPHEGOR graced the RJ Dio stage. Now I’m pretty sure I’m not the only one who thinks this, but Black Metal played in the middle of the afternoon, with the sun beaming in its full glory just doesn’t work. This in turn marred the whole occasion, well for me anyway. But acts of god aren’t the bands fault, who themselves were a tad lacklustre, except the bassist. He was their saving grace, and like all good bass players, he was that “comic relief” and ball of energy that the rest of the band hinge on, even if they don’t know it. Performance aside though, musically, they were as tight as a gnats never regions, so I guess they had that going for them.

I made a trek back to New Blood, and it was a shame that MUTAGENOCIDE played to literally no one, well, to begin with anyway. After seeing these guys tear Bristol a new one a couple of weeks previous, it’d be rude not to see them potentially do it all over again on a bigger stage. Despite the low numbers, the band proceeded to do exactly the same as that fateful night I mentioned. Top Drawer stuff to say the least.

Word on the grapevine was that ENSLAVED had their instruments go missing on route to Bloodstock (oddly enough, they weren’t the only band that this happened to), soldiering on like troopers, the Norwegians blasted through a set with its fair share of magic moments. Going into this, I wasn’t a particularly big fan of them, fast forward a week or so, it’s pretty much all I’m listening to. The same thing happened with a couple of other bands, but we’ll get to them in good time.

Feeling the death grip of Professor Heat, and his bumbling sidekick sergeant sweat, I took shelter in the nearest bit of shade I could find. Luckily enough, this just so happened to be the Sophie stage right as HANG THE BASTARD were kicking off. Riffs, glorious riffs, that’s pretty much how I’d sum them up, everything else went by the wayside. Did I mention riffs? I did? Because this set was packed full of those dirty ones that make you pull that stupid face. You know the one.

After apparently killing it last year with his other band last year, a band by the name of Emperor (you may of heard of them, just a hunch), IHSAHN didn’t exactly fill me with the vote of confidence I was expecting. There was a barrage of tech issues which sullied the whole performance in general, they persevered as well as they could, and on the rare occasion everything worked, they were phenomenal. It was just as soon as you’d get into the feel of the set, something would go wrong. Repeat that same story every other song, and you get the idea of how it went.

OVERKILL were a bit of a double edged sword if I’m frank. Everything was fine, more than fine in fact, they lived up to all expectations, except for one thing; Bobby Blitz. Now I’m not slating the guy for being terrible, far from it. He was on form during a song, but come on, does he really need to always do that high pitched, boars to the very centre of your brain, scream all the time? On that day, I learned that there can indeed be too much of a good thing. Other than that though, pure thrash gold.

I was debating hard whether or not to see the next band to grace the RJD stage, considering I’m not a fan of power metal, let alone SABATON. The musical aspect did little to change that, sorry, but on the flipside, the theatrics, the stage presence, everything else was top notch. As much as I don’t like Sabaton, they sure know how to put on a show on a grand scale. There was a tank on stage, you heard right, an actual tank. Massive kudos in that respect. In terms of stage show, best band of the weekend bar none. Just because you don’t like a band, it doesn’t mean that you can’t respect the hell out of them.

Headlining the main stage was TRIVIUM, now this may or may not of raised a few eyebrows. There was certainly a bit of controversy surrounding this when it was announced a few months back. But hey, remember that time they absolutely destroyed Download 05? I do, and who’s to say this time won’t be any different? Right off the bat, nothing went right. In pure Spinal Tap fashion, Corey Beaulieu was absent for a fairly large portion of the set due to difficulties with his guitar.

Red faces were to be had for sure, but once all the creases got ironed out, it was pretty clear to see that the organisers may of made the right decision in booking them. It wasn’t perfect by any stretch of the imagination, but you can’t fault the guys for persevering with it. I commend their attitude, and guts to just keep going in the face of such adversity, by the time their final song hit, they were every bit the band that exploded into our consciousness that day 10 years ago.