Funeral For A Friend Breaking Up / Final Tour 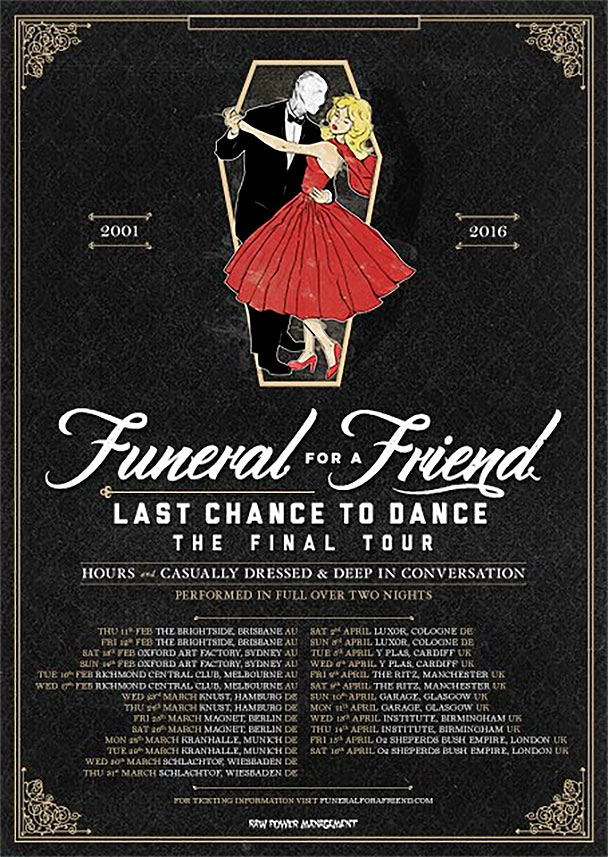 It’s been a grueling couple of weeks for the continuity of bands. They seem to breaking up left in right. Last week alone saw the end of Cynic, Elitist, Arsonists Get All The Girls, and I, The Breather. Now, you can add another band to that list – being Post-Hardcore front runners Funeral For A Friend.

They’ll be holding a farewell tour across Australia, Germany, and – of course – the United Kingdom in anticipation of this. You can read over the official statement down below.

“Dear friends, fans and anyone who has ever given a shit about us and our band over the past fifteen years.

“It’s never easy putting into words the feeling you have for something that in many ways is intangible. We’ve written this over and over and sometimes it feel like we’re missing something. But this needs to be written regardless so here goes.

“Today we announce the end of Funeral for a Friend. Yes, the end. We’ve had an amazing ride, met an insane amount of people, toured countries we’d never even dreamed we’d get to see and made music together that in some crazy way has been responsible for taking us on that ride for well over a decade.

“When we started this band the only hope and aspirations we had was to write music that we loved, play some shows and maybe make a record… we’ve surpassed that in so many ways, achieving three gold records along the way. It’s grown to be a huge part of our lives but like the saying goes all good things must end and we’ve come to the end of the line. We’ve had many curveballs thrown at us over the last fifteen years, some we’ve managed to avoid and others that quite nearly derailed us but we’ve always said to each other that when it’s time for this to end then we end it on our own terms, no one else’s. So there we go, one chapter closes and another opens and life goes on.

“To commemorate our band we’re playing one very last run of shows performing ‘Hours’ one night and ‘Casually Dressed’ the following night alongside songs from our other records and EP’s. It only seems fitting that we make these shows something pretty special. These will be an incredible amount of fun so we hope you can join us for one last crazy ride.

“Tickets go on sale 9am, Friday 18th of September. You can buy tickets for the individual shows or you can buy a bundle ticket for both nights at a special price.

“We want to thank all our families and friends, all the past members of the band and those who’ve helped us along the way. Let us not forget all the amazing bands and musicians we’ve had the honour of sharing stages with over the years. Finally, much love to the fans who have bought our records, bought the tickets and who come out to sing, scream and dance along with us.