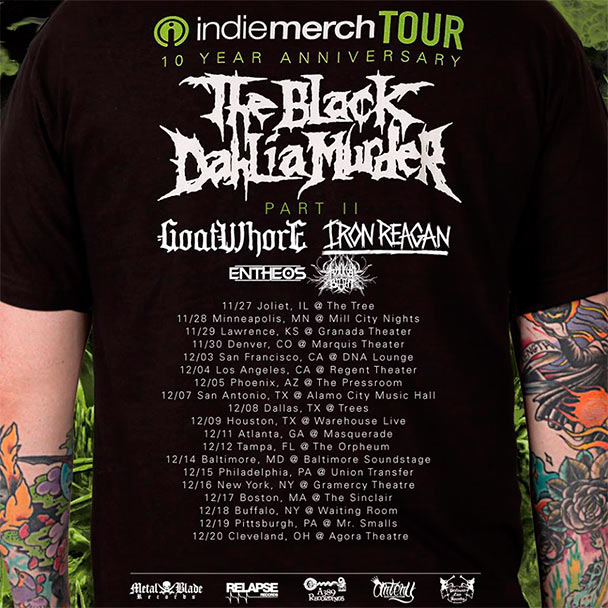 The Black Dahlia Murder just announced a whole new leg to the “Indiemerch 10 Year Anniversary Tour”, starting in October. For all the information on the first leg with Iron Reagan, Harms Way, and Maruta you can CLICK HERE. That venture will end in late October.

The second leg has just been announced for November and December (see dates on the flyer above). This time around, The Black Dahlia Murder will be touring with none other than Goatwhore, Iron Reagan, Entheos, and Artificial Brain! That’s one helluva line up to follow one helluva line up.

You can find all the information you could possibly want through the official press release below. We’ve also included music from all the bands.

THE BLACK DAHLIA MURDER Announce The Second Headlining Leg of The Indiemerch Tour 2015; New Album Out 9/18

THE BLACK DAHLIA MURDER officially announce the second headlining leg of the “Indiemerch 2015 Tour,” which kicks off Nov 27th and features GOATWHORE, IRON REAGAN, ENTHEOS and Artificial Brain. TBDM and friends are stoked to help celebrate a decade of merchandise and mayhem. TBDM has been part of the IndieMerch family since the beginning and continues to crush with their new album, Abysmal, which is set for a Sept 18th release. Be sure to either see below or head over to facebook.com/theblackdahliamurderofficial for all tour dates. Also, visit metalblade.com/tbdm to hear new music.

Vocalist Trevor Strnad had this to say about the upcoming trek: “It’s a pleasure for us to be involved in IndieMerch’s anniversary tour, they are the greatest merch company in the world and have been doing right by us for years. We’ve assembled quite a tour together showcasing some of the most killer bands out there from all walks of extremely heavy music. We are proud to be a part of it and we hope to see your smiling faces in the crowd each night!”

The tour will run in two parts featuring some of our favorite bands from each genre. On Part I (10/01 – 10/24) thrash masters Iron Reagan will provide the circle pits at maximum velocity, Harms Way will bring their brutally heavy style of hardcore, and opening act Maruta will set the tone for the night with their brand of death metal grindcore. Part II (11/27 – 12/20) will feature New Orlean’s masters of the dark arts Goatwhore, even MORE thrash from Iron Reagan, the modern technical metal mastery of Entheos (featuring 3/5th of now classic IndieMerch band Animosity!), and Profound Lore death metallers Artificial Brain.